Over the past couple of months, I’ve purchased more items through Restocks than any other mobile commerce app aside from Amazon. And I’d wager that aside from a couple of statistical outliers each of those purchases were for more money on average.

Restocks is the answer to a simple question: What if you could target the world’s most ravenous purchasers at the exact moment they’re most likely to buy some of the world’s most sought after products?

Restocks is app that drives purchasing via push notifications when highly anticipated shoes and streetwear brands (for now) release or re-stock items. It’s also cost me hundreds of dollars over the few weeks I’ve been testing it. From limited release Nike shoes to boutique brands like Supreme, Reigning Champ, Concepts and Kith — each purchase is a push notification and a couple of taps away.

Streetwear is a nebulously defined grouping of items that includes sneaker brands endorsed by icons like Kanye West, Michael Jordan, Nigo and others. In addition to sneakers, limited edition clothing, bags, hats, underwear, socks, accessories and other, weirder, items fall under the umbrella. Think of streetwear as premium clothing and goods that falls somewhere between ‘department store’ and ‘runway’ on the spectrum of rarity and price. An average sneaker may run $65-$150 at the store — but a rare one could run up to $200-$250 off the shelf and then resell for upwards of $1,000-$2,000 if it’s limited enough. 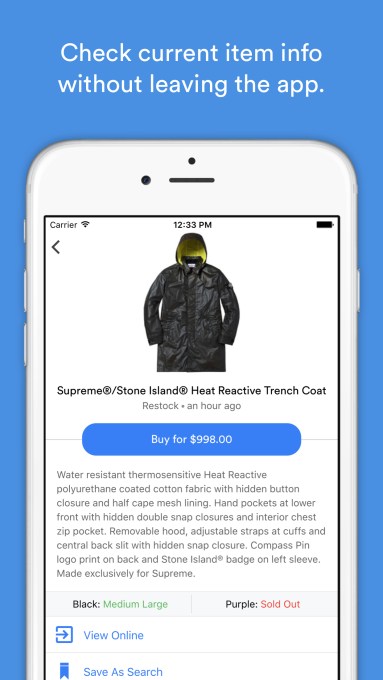 Dozens of companies including apps like GOAT, StockX and Slang have been built up on the back of the shoe component alone. And others like Grailed are tackling the resale market for hype clothing.

The problem with all of this is that, unless you are very fast, sometimes even faster than a ‘bot’ or script that auto-purchases items — or you are willing to camp in huge crowds, overnight and in the icy cold or snow — you are not going to be able to get most of these hot releases when they drop.

Restocks was created by founder Luke Miles to solve that problem for himself when it came time to cop some Supreme gear. The brand, founded in 1994 by James Jebbia to cater to the NYC skater scene, has become hotter than hot with people scrambling to snag its iconic ‘box logo’ shirts.

“I was (and still am) a huge fan of Supreme,” says Miles. “I noticed that sold out products on their web store would come back in stock, and I wrote some code that would send me an email when Supreme restocked sold out products. Eventually I hooked this up to text messages and started getting people to pay for it, then it became an app, and then I realized that this could be a useful tool for all sorts of brands and products, not just Supreme.“

The concept that the store would restock items that either came back in stock or fell through via canceled orders was a key one. I myself have snagged several hot shoes and bits of ephemera by waiting for the push notification from Restocks (you can set up alerts for items, whole stores or other custom terms) and swiping left on it. When the app launches it’s right on the item page and if it’s a compatible store like Supreme you can buy it with a pre-filled profile in a couple of taps. With other stores you’re at least half way there and can ‘buy’ with an in app browser that has access to password managers and saved cookies for logging in.

These ‘stealth’ restocks are a godsend to those who miss out on the first rush. Restocks, of course, will notify you of new items posted as well and I’ve even managed to make out well with those — but you can’t get everything you want on the first go, especially if it’s out of your time zone.

For now, Restocks is charging a membership fee of between $25-$36 a year, which is a pittance for most avid streetwear buyers — many of whom purchase expensive and shady script-based “bots” that try to auto fill sizes and shopping carts instantly, putting them ahead in checkout lines on the web. And who, of course, spend hundreds or thousands a month on hot items.

Getting one pair of Jordan XII Wings at retail, for instance, would have netted a nearly 10x savings when the shoes were going on eBay for close to $2,000 in the resale market.

“Honestly, I am still surprised how much people are actually able to buy off of [the app],” says Miles. “Users email me and tell me they’re able to get everything from Box Logo Crewnecks from Supreme, a nice pair of Asics to even Yeezy Boost 350s. It’s exciting to see some of the most rabid consumers exist adopt Restocks as a major part of the purchasing process.”

Miles, who is currently in Y Combinator’s Winter batch, says that the limited release nature of streetwear and the ‘rabid’ nature of the average consumer has set up a piece of prime retail. 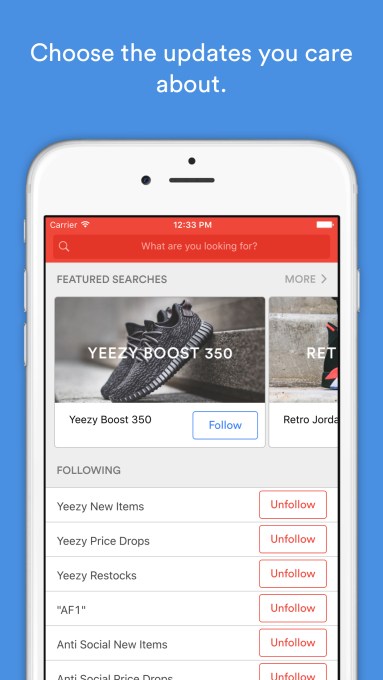 “StockX once did a survey finding that sneakerheads spend 10% of their income on sneakers. It’s a great space to be in because the consumers are super passionate about the things they want, and we’re solving real problems for them by putting real time information all in one place,” says Miles. However, I see Restocks expanding well to other verticals…you see these niches of passionate “superconsumers” with products like nail polish, yoga pants, new technology releases, or boutique luxury handbags. I see Restocks becoming the place anyone will go to buy hard to find products at retail.”

Restocks faces challenges not only from the sneaker purchasing apps I mentioned above, but from retailers that are getting more savvy to the fashion conscious streetwear buyer on their own. Nike has its own SNKRS app and Adidas has ‘Confirmed’ — it’s only a matter of time until anyone with a strong brand is tapping into its customer base to offer a similar kind of ‘register and raffle to win a chance to purchase’ experience. Miles feels that Restocks differentiates itself by aggregating dozens of stores from across the net from fashion outlets like Barneys to boutiques like Kith and middle-road retailers like Pacsun.

“It’s clear that big players see that there’s an opportunity here — but when apps like Confirmed only work for in store releases in a handful of cities and SNKRS seems to be still a toy Nike is playing around with, it’s unclear how seriously they’re taking this space,” says Miles. “I don’t see them as competitors but rather more specialized tools that augment their current web/in store offerings — Restocks is the place for all releases, everywhere, instantly.”

There are a combination of a half-dozen factors that are making this such an interesting retail segment to watch. Limited run merchandise is an interesting pressure cooker for pricing economics, for one. Unless you have celebrity or an inside plug, you’re not getting the sneaker for retail unless you get it in the initial run or the spurt of restocks that follows. Aside from that you’re stuck buying shoes at whatever price the resale market sets. Those prices can range from your normal early bird tax to absolutely outrageous — but there’s no other way to get them. 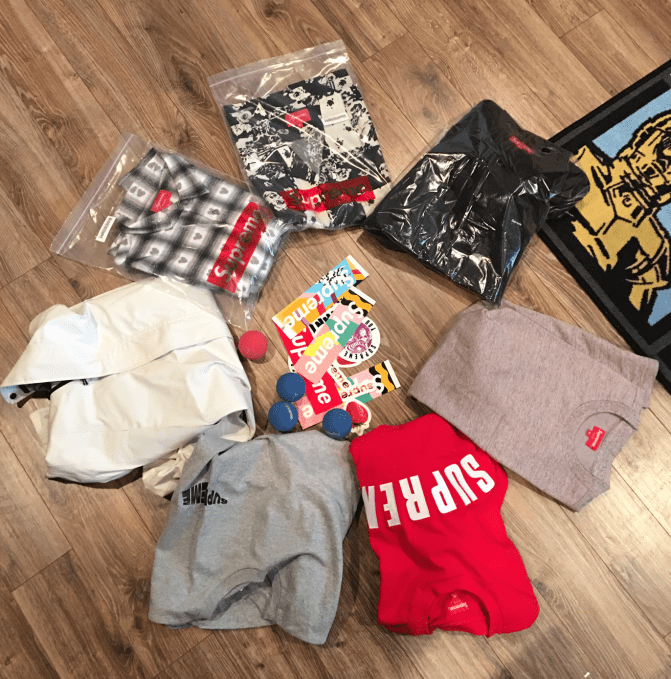 My last Supreme haul, thanks to Restocks

For some people that may not matter, but for others it becomes an obsession — and those hyper-dedicated customers are exactly who Restocks is going after. The entire streetwear game has been exploding so rapidly over the past few years that it’s difficult to chart an exact growth pattern but there are indicators. In an article about the recent IPO of streetwear publishing and retail empire Hypebeast — a sign on its own — a report is quoted from fashion market research firm WeConnectFashion which pegged the streetwear category at $75B in 2013, and it’s only bigger now. Heck even our parent company Verizon wants a piece of the action, evidenced by its purchase (with Hearst) of Complex.

There is also the surge of pop culture figures like Kanye, Wiz Khalifa, Kim Kardashian West, A$AP Rocky and Beyoncé (who just founded her own streetwear/health goth brand Ivy Park) who straddle the line between streetwear and high fashion like Dior, Vetements and others. Kanye and Beyonce, in particular, are interesting in the way that they tap into high fashion influences with their own clothing lines. Celebrity endorsements are nothing new, but the cross-pollination between streetwear and high fashion is being accelerated by this frisson.

All of this leads to a hybrid segment that combines high fashion elements and rarity with (depending on who you are) prices that are more affordable to the common person. As long as you can buy them at retail, of course, which is the point of an app like Miles’.

You, personally, may not be in the market for a pair of $250 BAPE sweatpants, but a whole market full of people are. And they’re just waiting for their push notification.