Online street maps have become incredibly accurate over the last few years, but most maps aren’t all that precise when it comes to knowing exactly where on a street a store, restaurant or other business is located. That’s why your Uber driver sometimes wants to drop you off in the alley behind a restaurant, for example. SocialRadar‘s new PlaceKit promises to offer far more accurate location data for business and storefront locations — so accurate, indeed, that it can even tell you where the entrance doors to these businesses are located.

It’s obviously easy to make these claims, but the company put together a demo site that puts its mapping data next to Google’s. Looking at that, it’s pretty clear who has the more accurate data.

According to SocialRadar CEO Michael Chasen, who previously co-founded and led the highly successful educational technology firm Blackboard from 1997 to 2012, the company previously tried to build a location-based consumer app. The team, however, quickly realized how inaccurate much of the existing location data for businesses is and decided to build tools to fix this. The first of these new tools was LocationKit, a location manager SDK that developers can use as a drop-in replacement for Apple’s and Google’s location manager tools.

While LocationKit helps developers determine where exactly a user is, PlaceKit then knows exactly what’s around that location.

Even though Google Maps virtually always puts a point of interest onto the right block, it’s often unclear on what street the entrance actually is. With SocialRadar’s data, on the other hand, there is never any doubt where exactly you need to go to find a store. The team also extended this database to office buildings, so while other mapping services often randomly show a cluster of businesses that all share the same office building across a city block, the SocialRadar team organized them all under one address. 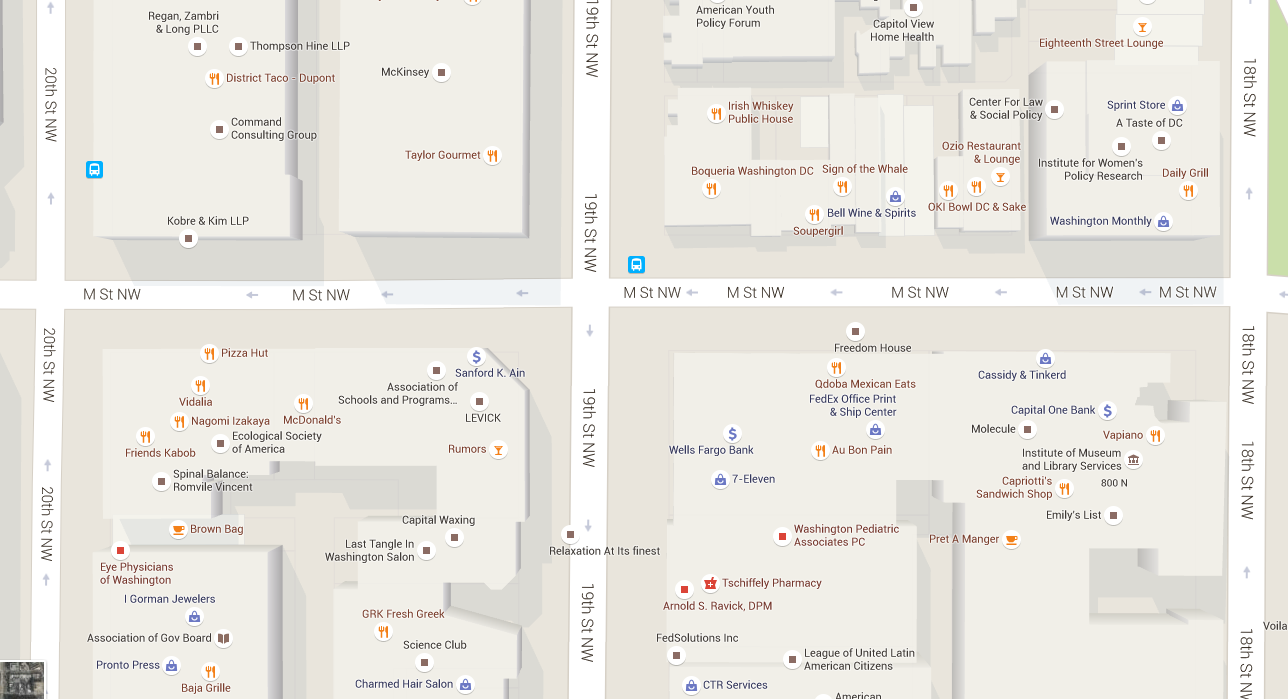 The same area on Google Maps

Chasen didn’t want to talk too much about the technology the team developed to build this highly accurate location database, but he did say that his team figured out “how to use street-level imagery with some human interaction” and combine that with the company’s proprietary algorithms. A lot of that human interaction was based on using Mechanical Turk for some of the more menial tasks, from what I understand, but SocialRadar also filed for a patent for some of the technology it invented.

SocialRadar’s new location database covers all of the United States, but Chasen also showed me that the team tested its tools by building the same data set for Paris, France. Indeed, the plan is to expand SocialRadar’s service to other countries soon, starting with Europe.

For now, SocialRadar plans to license its data to enterprises, mobile advertising firms and similarly large development shops first. Sadly, the company doesn’t currently offer a self-service plan that would allow any developer to use its data, but Chasen tells me the team plans to do this in the future.

Given how well SocialRadar’s technology seems to work, I would be surprised if a large number of businesses that rely on location data for their core user experience wouldn’t adopt it (think Uber, Lyft, advertising firms, etc.) or even consider acquiring the company.