Despite the increasing ubiquity of online videos, making a professional-looking one is still a complicated process that usually involves chains of emails and uploads. 90 Seconds wants to fix that problem with its cloud-based platform, which lets users handle almost every part of the video production process in one place. Today, the startup announced it has raised a $7.5 million Series A led by Sequoia India.

Other investors in this round include pay television provider SKY TV New Zealand, Airtree Ventures, Beenext and Oleg Tscheltzoff, founder of stock image agency Fotolia.com. Now based in Singapore, 90 Seconds was launched in Auckland in 2010 by CEO Tim Norton after he struggled to find an online video production service for shoots in different places.

“It was hard to get things done,” he says. “The process varied widely and it was a big deal to go between countries.”

Now the startup’s goal is to make video production “super fast, as fast as Uber,” no matter how geographically scattered its creators are.

“It might not need to arrive in two minutes, but videos need to be published within anywhere between 24 hours to two to three weeks. We want to make the workflow real time,” Norton says. 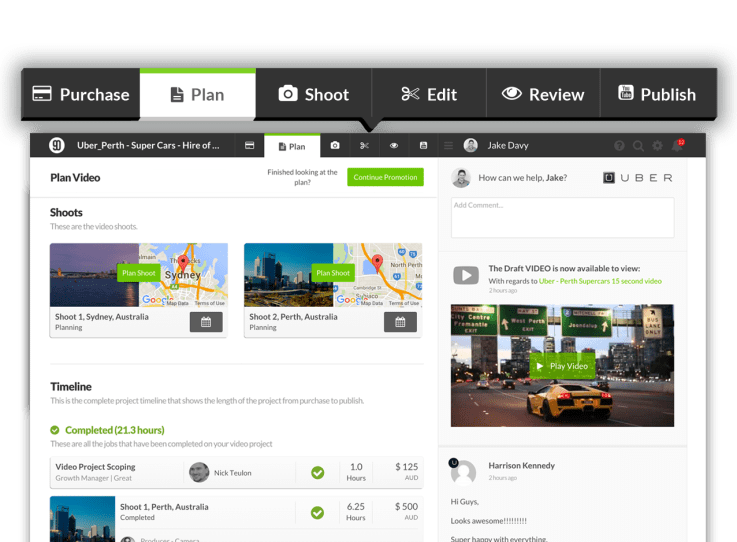 The company plans to continue adding to the mobile version of its software until clients can manage every part of the production process — from commissioning a video to reviewing footage and uploading to YouTube and social media platforms — on their tablets or smartphones.

Timeliness is important for 90 Seconds’ users, who have included Visa, Samsung and Microsoft, because they need to take advantage of trending topics and search terms. More companies are also using the platform to handle longer shoots, like TV spots.

Hooking up companies with creators and giving them all the software tools they need to produce a video is how 90 Seconds differentiates from other video production sites (which include Visually, Userfarm and SmartShoot) and also what it hopes will future-proof its business model from new competitors as demand for online videos grows.

The startup plans to open offices in San Francisco, New York, Hong Kong and Berlin this year. Norton says its international expansion started “organically” based on where its customers needed to find people for shoots, instead of recruiting in advance. 90 Seconds’ take rate currently includes in-house project managers who work with clients, but it wants to be able to outsource that role to its marketplace, as well.