Got a grand burning a hole in your pocket? You could get a new laptop — or you could send this tiny, palm-sized satellite to space. That’s what a team of engineers at Arizona State hope, anyway: their “FemtoSats” are meant to be as cheap a space-bound platform as has ever been devised.

At just 3cm per side and 35 grams (that’s about 1.2 inches and 0.077 pounds, dogs of the Imperial system), the SunCube 1F is the prototype FemtoSat. It’s powered by a salvaged scrap of solar panel (they don’t make them small enough off the shelf), the tiny unit includes propulsion, imaging, communication, and data collection.

“The design standard bootstraps from the Cal Poly CubeSat standard and is extensible, allowing major customization,” wrote Jekan Thanga, the ASU assistant professor who heads up the project, in an email to TechCrunch. 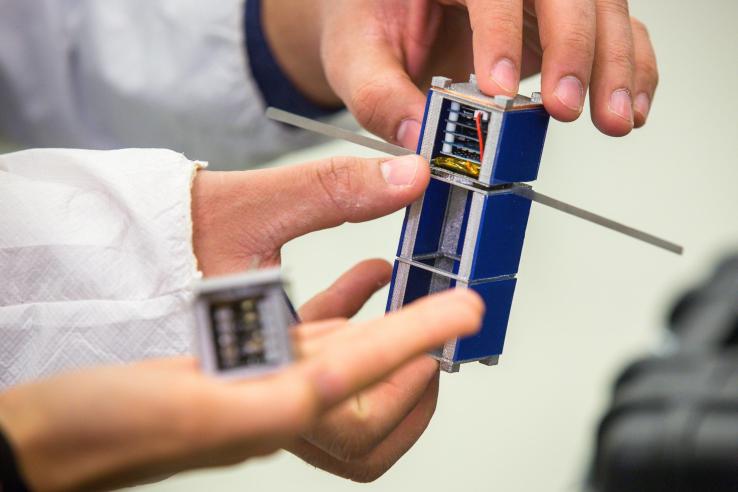 The larger 3F version stacks 3 of the cubes together, for a satellite about the size of a stick of butter. This one has room for a payload, though the increased mass and volume will end up setting you back considerably more than the 1F.

The size is a mixed blessing. It’s cheap to send up, but finding space-ready hardware that fits in a 3cm cube is difficult. They’re working on “inflatable” antennas that use sublimating powder to extend themselves, though the team has yet to find an X-band wireless chipset that fits in the FemtoSat (it’s UHF and S-band for now).

At current prices, the team estimates a SunCube 1F could conceivably be sent to the ISS for under $1,000, where microgravity and other space exposure experiments could be carried out. Low Earth orbit would cost about 3 times that.

Still, it’s a bargain compared with launching even the most barebones CubeSats, which could cost a hundred grand or more, depending on launch services and demand. (Here’s hoping reusable first stages will bring that down, though.)

“Because of the low launch cost, we can test and space-qualify components without having to take it on a CubeSat or even dedicated spacecraft,” Thanga wrote. “I think that will lead to fast turnaround times in space hardware development and qualification.”

Lowering the barrier to entry will almost certainly encourage experimentation and expansion, just as it has in many other areas of tech. But the team is a long way from, say, mass manufacture or commercial availability. They plan to make a dozen or two FemtoSats in order to test and qualify them for deployment. Eventually they hope to launch them as pint-sized science laboratories, or include them on larger spacecraft as essentially disposable general-purpose orbiters. If you’re curious, a standards doc is available here.

If you’re near the ASU campus and have the night free, consider dropping by Marston Exploration Theater to hear Thanga present the SunCube and other tech his SpaceTREx Lab has been working on. It starts at 6, so hurry.