Flat video is so last century and GoPro is pulling out all the stops. Through a series of product launches — most recently the new Omni — the company signals that it has your back in the battle against bi-dimensional consumption of moving pictures. The strategy confirms the obvious — i.e. that it knows which way the wind is blowing. But I think it’s too little, too late.

With the new Omni, you can combine the power of six HERO4 Black cameras to shoot full 360 degree video; perfect for immersive video experiences, VR and photometry use cases.

Omni was first announced at CES earlier this year, but is being demoed live for the first time at the NAB conference in Vegas in a couple of weeks — one of the biggest shows in video and multimedia content production.

Full-surround systems for GoPro are not a new thing — there have been quite a few attempts to string together a ton of the GoPro cameras to create camera arrays.

GoPro itself has been promoting its GoPro Spherical solutions over the past year, too, with special channels dedicated to its GoPro VR kit on YouTube and more spherical video featured on its Facebook page, as well.

Not the first VR rodeo

Last year, the company announced a partnership with Google’s Jump platform in the form of the GoPro Odyssey. The device looks sexy as all heaven (if you’re into that sort of thing). It comes with no fewer than 16 GoPro cameras and a bank-breaking $15,000 price tag. Obviously, the target audience veers deep into specialist markets that require stereoscopic 360 video (the Omni “only” does monoscopic video).

If spending $15,000 on a surround video kit doesn’t fill you with tingly sensations, there’s also been the other extreme: Building your own. There are a lot of plans and guides available online for how to 3D print or build your own rigs out of metal, wood or perspex — with some solutions being more elegant than others. The problem with these solutions has been the synchronization between the cameras, both in terms of frame rate (ensuring that each camera is shooting video frames at the same time at exactly the same number of frames per second) and alignment (making sure the cameras are adjusted just so to create a seamless 360-degree experience is an exercise in fine-engineering or some seriously hard-core post-processing efforts). 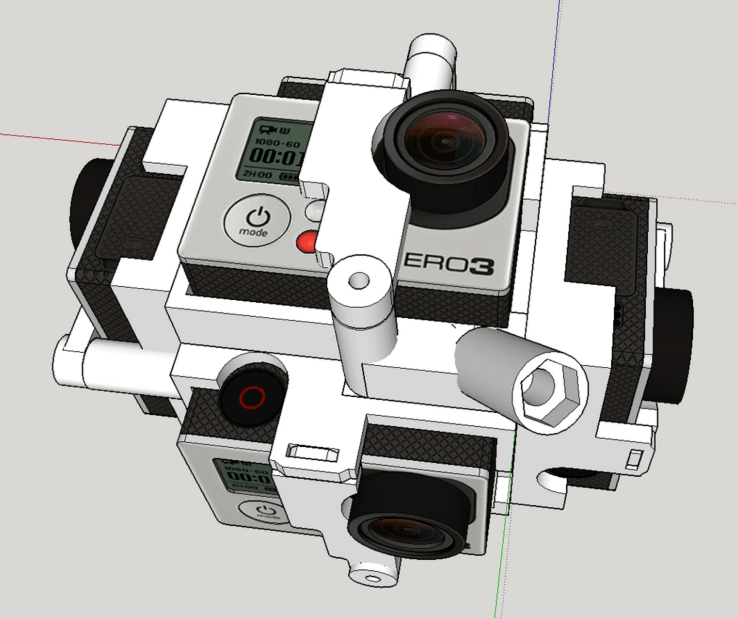 Plans and CAD drawings for DIY, 3D printed rigs have been available for a while, such as this version of a “360 Video GoPro rig” by Friloba

Does GoPro make sense in a crowded market?

GoPro has kept a tight lid on the pricing and availability of Omni, but given that six GoPros on their own will set you back around $3,000 — and the fact that a comparable rig already exists for around $600 — it’s reasonable to expect a price tag of around $3,500 for the full kit, including cameras. If you already have a ton of GoPro cameras kicking about, you’ll be able to save some cash by buying the Omni kit without the cameras, too. 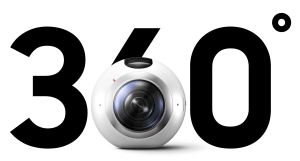 Samsung is going big on VR, too, with Google Street View compatible pictures spawned by its Gear 360 camera

While it is exciting that it’s possible to use these relatively high-quality GoPro cameras for VR purposes, I can’t help but wonder whether it might be too little, too late; there are a lot of other VR cameras in the marketplace already, with more being launched on an almost-weekly basis. GoPro is going to be feeling the pressure from all sides.

The bottom end of the 360-degree-video market is well-served by established players like Ricoh’s Theta S,  Kodak’s SP360 action camera and Samsung’s Gear 360. 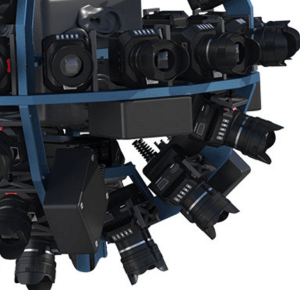 Got $150K handy? This 42-camera rig will give you a gigapixel worth of resolution. Woof.

What all these cameras have in common is that they are all-in-one solutions that deliver video that’s ready to use. That makes them vastly easier and faster in a production environment: they don’t have the challenges inherent in multi-camera setups, and its operators won’t need to collect several memory cards, sync, stitch and render the video before it’s ready for editing.

GoPro is going to be feeling the pressure on the high end as well. You can easily spend $150,000 on a high-end off-the-shelf 360-degree video rig, and if you’re going the custom-built route, the sky is the limit: There are plenty of experts in Hollywood who will build anything you want. None of that might sound like a true challenger — $150,000 is a lot more than $4,500 — but the truth is that there are much more affordable solutions available — and they are dropping in price rapidly.

Squeezed from all sides

Using the six 4k cameras in an Omni rig will give you a lot more resolution to play with than an all-in-one camera, and the product may just hit the sweet spot for the rapidly expanding VR video crowd, but in placing itself in this exact place in the market, the company is putting itself in a really scary place indeed: Not entry-level enough for mainstream, and not high-end enough for professionals.

The problem GoPro is facing is that they haven’t done anything innovative in a long time. The cameras are good enough, and becoming synonymous with action cameras won’t have done their sales any harm, but at the heart of it, GoPro is essentially selling commodity hardware at a tremendous markup. Sales figures — and its corresponding stock price challenges — are telling a story all its own.

Going after the VR market seems shrewd; it is the hottest thing in tech, and has been for a little while. There is some market fit as well: There is a sub-section of VR that is related to the action sports market, which is good news for the company, but I doubt the once-mighty GoPro brand can save them here.

Without a history of innovation on the camera side (Hero Session doesn’t count), and no evidence of a high-quality all-in-one solution in the pipeline, GoPro is between a rock and a hard place. The cheaper, simpler all-in-one cameras are a credible threat for many use cases, and as quality (and especially resolution) improves, defending a multi-camera set-up is going to get harder and harder. Simultaneously, the high-end multi-camera solutions will be dropping in price, and become a good alternative for users who are playing the quality über alles game.

Launching a six-camera setup rig like the Omni is a ballsy move, I’ll give them that, but I can’t help but feel that this is a short-term play in a long-term industry. It may help a little bit, but in order to survive in this market, they’d better have something far more impressive up their sleeve, and soon.