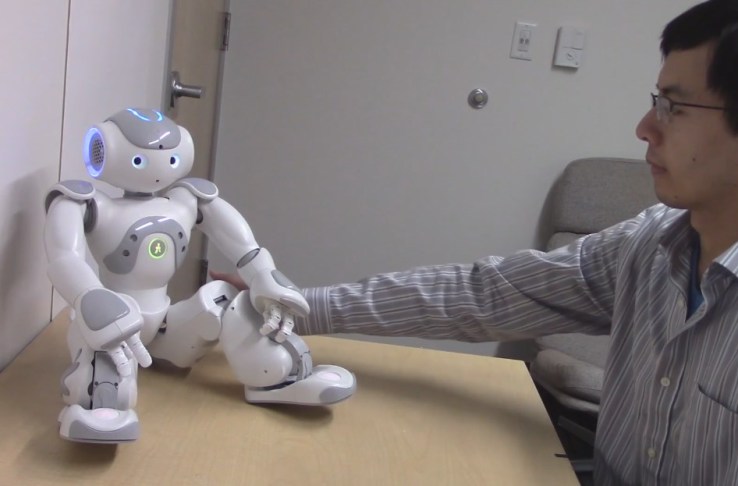 How would you feel if a robot asked you to touch its butt? Maybe it sounds like a silly question (actually, there’s no maybe about it), but as robots proliferate and anthropomorphize, it’s actually something that needs to be considered. So scientists at Stanford considered it.

The study, to be presented soon but previewed by IEEE Spectrum, is entitled “Touching a Mechanical Body: Tactile Contact With Intimate Parts of a Human-Shaped Robot is Physiologically Arousing” — and really, the title says it all. Though it should be noted that “arousing” only indicates a generally heightened state of awareness or attention.

The researchers sat volunteers at a table with a Nao humanoid robot reclining casually on it. They were told (by the robot, in fact) that it was a vocabulary exercise focusing on terms for body parts. Volunteers were told by the bot to, for instance, “touch my ear” using their dominant hand, while the non-dominant hand remained on a skin conductance sensor that loosely monitored their physical state.

When asked to touch “high accessibility” areas — places we normally touch on other people, like shoulders and elbows — volunteers did so without hesitation or agitation. But “low accessibility” areas — this would be the robot’s butt and where its junk would be — produced delay and that arousal we talked about. You really ought to watch the video:

It’s not that robots are going to start propositioning humans and making them uncomfortable, but this is the kind of thing that must be taken into account when designing an interface — in this case, the robot itself, its gestures and posture.

A robot isn’t a person, but because it’s shaped like one and designed to act and speak like one, we imbue it with a sort of temporary humanity when we interact with it. Phones don’t look like people, so they don’t have butts, or if they do, no one seems to care that we’re touching them all the time (HTC phones used to have chins, though). But I personally guarantee you will bump into a robot and find yourself saying “excuse me” some time in the next decade. Several of you have probably already apologized to the Roomba after stepping on it.

The paper, by Jamy Li, Wendy Ju and Byron Reeves, will be presented at the International Communication Association’s Annual Conference in June.