Sometime today you’re going to read a marketing message that was probably written by Persado‘s software — and if you haven’t, Goldman Sachs has led a $30 million investment into the company to make sure you will soon.

Persado has developed software that can write what co-founder Assaf Baciu calls “cognitive content”, which he says is copywriting primed to get readers to engage.

“We’ve run 4,000 campaigns and our average uplift on conversion rates is 49.5%,” Baciu boasted. That includes all types of messaging, from up-selling, to cross-selling, to (I’m assuming) just selling.

Baciu and his co-founder Alex Vratskides began working on the idea that would become Persado five years ago, and the two men spun out the business from Upstream Systems in 2012.

All of the company’s previous investors participated in the most recent round. 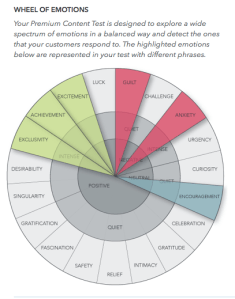 With 200 employees and offices in New York, San Francisco, London, the company’s biggest issue has been spreading the word about its existing applications and the other industries that could be influenced by the technology.

“Cognitive content has a much broader applicability if you think that in the next few years everyone wants to inspire action,” says Baciu. “If you have a fitbit device and you want motivation to run the next 5K…. if you’re in the market for dating and you want to improve your chances…. All of these are examples of areas where cognitive content can play a role.”

While Persado remains focused on marketing campaigns for now, in the next few years the company plans to start pursuing opportunities for pushing health and wellness prompts in apps and other areas, says Baciu.

Back in 2012 when Baciu and Vratskides were at Upstream, a mobile marketing company, the two men saw the difference that changes to simple words and phrases could make to how a campaign was received. It was that observation that led the two to pursue developing the technology that would become Persado.

The key was to apply machine algorithms and computational logistics to solve the problem of how to craft the perfect marketing message. In the early days, it would optimize messages from marketers, but now it can begin crafting messages itself given parameters from companies.

The company has cataloged 1 million words and phrases that marketers use in their copy, and scored those words based on sentiment analysis and the structure of marketing pitches defined by a message’s format, linguistic structure, description, emotional language, and its actual call to action. The software can create a message, optimize its language, and then translate that message into any of 23 languages, according to Baciu.

“We tagged language that we harvested around the web and then our content went to market roughly 40 billion times,” says Baciu. “Every time we do a campaign we leverage that content. We accumulate knowledge over time and refine it.”

With every word organized and scored, Persado can tweak messages infinitely to find the phrases that will be most engaging for readers,” says Baciu.

So, it’s true for marketing language, but when will Persado be coming for my job (sorry, I’m self-interested)?

“We’re not here about displacing, we’re here about enhancing,” says Baciu. And to get to a place where a machine can turn out an article with (ideally) some creativity and critical analysis will take another 20 years.

“On the debate of whether technology is replacing or enhancing we’re optimists,” Baciu says. “We want to enhance on the ability to drive impact.”