Seven rounds of betas weren’t enough — many iOS users are reporting on Apple’s support forums that a bug is affecting their devices. When they click on links in Safari, Chrome, Mail, Messages, Notes and others, the app freezes and crashes. If you’re one of them, here’s a fix that might solve your issues.

Update: Apple says it’s working on a software fix for the issue:

We are aware of this issue, and we will release a fix in a software update soon.

It looks like this issue is related to Universal Links. With iOS 9, Apple introduced Universal Links, a brand new way to handle links with native apps. App developers, such as YouTube, can register domain names to open web links directly into an app, bypassing Safari.

Sergey Roshchin published a video demonstrating today’s bug. His iPad is working fine. But then, he installs the Booking.com app, and Safari becomes unusable. When he clicks on a link, it hangs, and then crashes.

Booking.com associates its app with all sorts of domains — too many domains to be precise. With 2.4MB worth of domain-name-to-deep-link entries, Safari and other apps crash when iOS checks links against its Universal Link database because this database is too big. A tipster also told me that the Voyages-SNCF app also generates crashes on iOS 9.3. Update: Voyages-SNCF doesn’t have universal links, so the app shouldn’t cause any issue.

@robotspacer @bzamayo it seems to be related to booking's usage of web credentials / universal links: 2.4 MB of app-associations entries

And yet, the Booking.com app was updated on March 17, before the release of iOS 9.3. It’s safe to assume that something has changed with iOS 9.3 causing app crashes when handling these links.

The WebKit team released a huge update with iOS 9.3 and OS X 10.11.4. Safari 9.1 contains many changes under the hood. Maybe the Universal Link bug is related to this WebKit update — maybe not.

Either way, if you’re encountering this bug, Apple will probably fix it in its next bug fix update. In the meantime, you should delete the Booking.com app and… wait. It won’t fix your problems instantly as iOS checks Universal Links every now and then. But at least, your iPhone will work again tomorrow.

Update: Deleting Booking’s app might not even be enough. 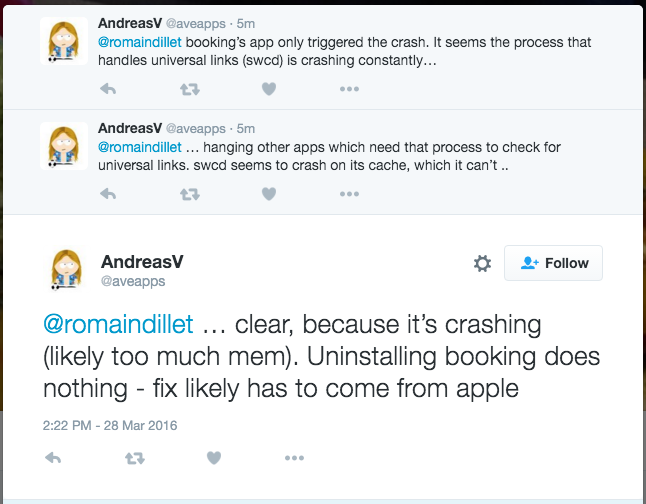 Update: Booking.com has sent me the following statement:

We’ve uncovered some issues with the universal linking framework, which appear to be an issue specific to Apple iOS 9.3. We understand they are in the process of correcting, and we’re offering any help we can to help them expedite a resolution.