As a student-entrepreneur, I find myself surrounded by the birth, growth and death of new ideas that feed the venture capital industry. Based on what I am seeing, I think investors should be looking more intently at this sector. If they were, there would be more concern over a couple of things affecting their deal flow. Here are two of my favorite…

A student-entrepreneur’s temperament heavily affects his or her chances of success in entrepreneurship, especially during the early stages of a venture. I have seen this firsthand at UCLA and USC; I assume the case is similar throughout the U.S. Temperament generally includes several elements; here I focus on where one falls between introversion and extroversion.

I think investors are aware of the connection between temperament and success as an entrepreneur, but I don’t think they understand the way in which it affects the set of investment options that are eventually made available to them.

Having to defend an idea to others too early in the innovation process overemphasizes the role that temperament plays in taking a tech innovation to market. Many would-be student-entrepreneurs have a temperament that prevents them from being good at selling or justifying their ideas to others.

Investors need to recognize that a potentially large bias is present.

The current “pitch mentality” of accelerators, incubators, venture capital and entrepreneurship education tends to filter student participation not necessarily by the quality of their ideas, but rather by their ability in this style of communication. Quiet student-entrepreneurs are coming up with good ideas at (at least) the same rate as everyone else, but they are not being equally supported as a result of an industry that is fine-tuned for extroverts.

This has been justified by pointing out that temperament affects an entrepreneur’s chances of success regardless of the quality of his or her idea. And this is correct, but only because it is an artificial constraint set in place by the design of the current system. There is nothing preventing an innovation support system that separates the innovation from the temperament of its creator.

To be fair, I think the system as it stands certainly does well in forcing student-entrepreneurs to develop and work out the details of their venture, and it certainly weeds out many bad ideas. But investors need to recognize that a potentially large bias is present, and decide whether or not it is something they want affecting their deal flow.

Not surprisingly, it turns out that a select number of faculty and fellow students have their hands on the tap of venture capital deal flow from universities. 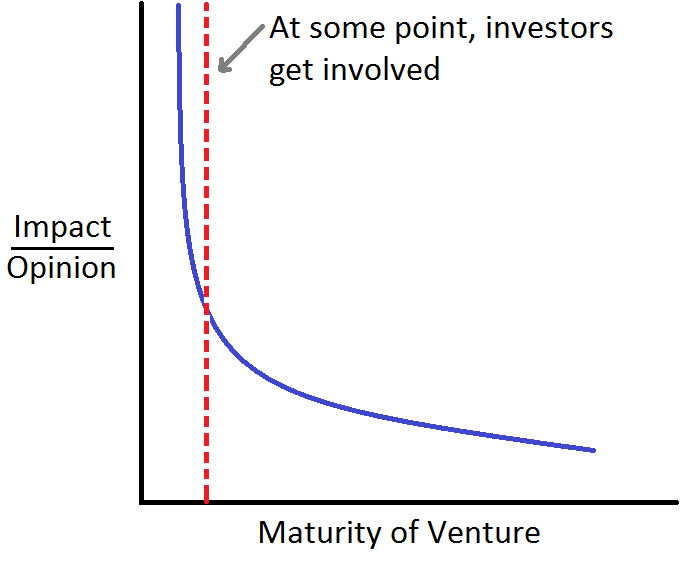 Figure 1: New ventures tend to be exposed to high-impact effects in the places where they originate. Impact is with respect to whether or not the student-entrepreneur continues to pursue the venture. There are some cases where single opinions have a large impact at the end of a company’s lifetime, i.e. in legal disputes.

For very new ventures, the kind you hear about in the dorm hallways and classrooms, the impact a single opinion has is significantly higher than at any other point in the lifetime of the venture. For many student-entrepreneurs, hearing the wrong opinion from (just) one person at this stage could mean the difference between pursuing or abandoning a venture. This gives a great amount of influence to the people around a student-entrepreneur when he or she is in early ideation stages. Investors should be interested in whether or not this is too much influence.

There is a tendency to imagine that good ideas will survive despite this; they may not look the same as when they started, but good ideas are born as such and, if successful, they will retain at least the essential kernel that made them good in the first place. This notion is especially strong in tech innovation.

I am suspicious there is too much uncertainty between origination at the university and the point of investor involvement for this to be the case, especially when it comes to understanding the potential for impact (in dollars or otherwise). An industry that ultimately uses dollars to measure success should find this concerning, as this can cause some big ideas to fall just short of the point of investor involvement.

What can VCs do about it?

Are the role of angel and incubator being conflated with that of VCs here? Possibly. Working this far up the funnel of deal flow would likely be difficult for VCs to handle, simply because of the increase in volume it would create.

Add to this the complications that come from evaluating a venture close to its birth: VCs would be far away from the quantitative indicators they typically seek for analysis. This lack of data sends many investors running, and rightfully so for some.

But identifying ventures at the pre-seed stage is becoming increasingly important as more money and players enter the game. We are already seeing a move to more proactive deal-flow practices; understanding and taking more control over the source of deal flow from universities is another option toward this end.

If VCs decide to get more involved in innovation support systems at universities, my suggestions are:

Ultimately, all of this is based on a hunch; there is very little evidence to suggest whether or not these suggestions are any good for VCs. As readers who respect and appreciate data, you can also appreciate its absence, and what can (and cannot) be said as a result. There may well be an upside here that makes the effort worth it for VCs, but we won’t know until someone studies this space in more depth.