As promised, Hulu has entered the world of VR. The streaming service today announced the launch of an app designed for Samsung’s Gear VR powered by Oculus. Now available on the Gear VR Oculus Store, the new app is the first of what the company says will be several VR apps for different platforms, currently in the works.

In addition to providing access to Hulu’s 2D content library in a “360-degree” environment, Hulu has also introduced exclusive original content along with several VR films.

Even though the 2D content was not designed with VR in mind, the app allows viewers to watch in a fully immersive viewing environment. Users can choose between a variety of scenes for watching their favorite shows or movies, including a living room, big screen movie theater, or watching from a beach. Each 360-degree environment also lets viewers make adjustments to the outside scene, lighting, and look-and-feel.

At launch, the company says there are over 25 pieces of VR content available in the app from Baobab Studios, Discovery Communications, Las Vegas, The National Geographic Channel, RYOT, Showtime Networks, SilVR Thread, Spoke, Studio Transcendent, The Uprising Creative and Viacom. The 3D virtual films are also available to every VR app user, even if they’re not paying for a Hulu subscription. 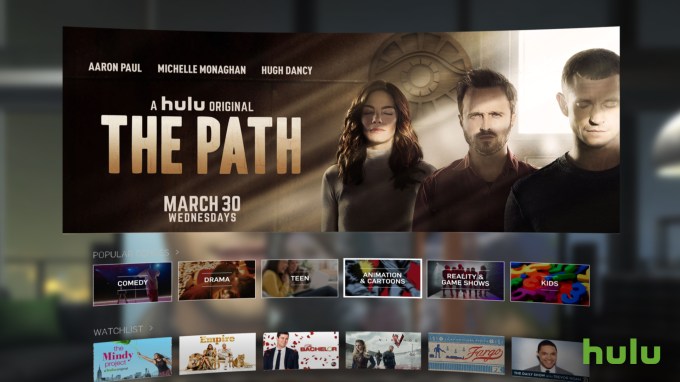 One of the more notable items offered in the app is “The Big One” – Hulu’s first-ever originally produced VR film. The film was developed in partnership with Lionsgate and features Freddie Wong and his RocketJump brand, and allows users to watch a meteor shower that “soon turns into an apocalyptic nightmare,” says Hulu in its announcement.

However, this is not going to be Hulu’s only effort in the VR space – the company previously said that it was developing VR apps and content for other platforms, though it has not offered details on which devices, specifically, will be supported in the future or when they will arrive.

But Hulu says that now that the app has arrived, it plans to release new VR films, shorts and environments with new gadgets on a “regular basis.” 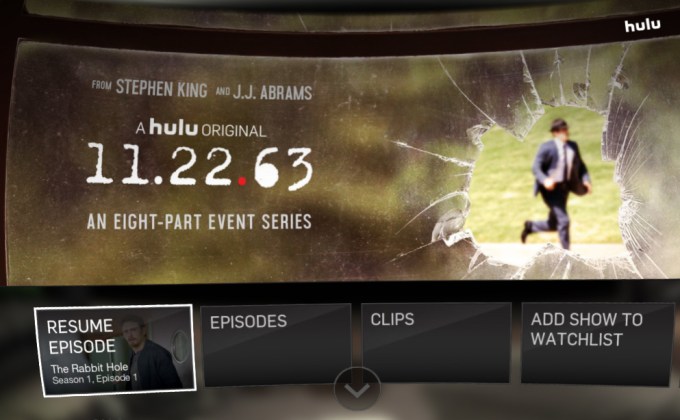 Hulu is not the only streaming service with plans for VR. Rival Netflix is also working on apps in the VR space, including its own for Samsung Gear VR, for instance.

In addition to the news of the announcement itself, Hulu also offered a behind-the-scenes look at the technology involved and the application’s development. Here the company goes into detail about some of the challenges about building for VR platforms, and how Hulu’s engineers overcame those obstacles.

Although the app is out now, Hulu clearly still feels that there will be much to learn about how VR experiences should be developed, and what kind of content will work best on this new platform.

“We are at the very beginning of VR and like everyone involved in VR technology and content, we at Hulu, have a lot of learn about what makes for a great VR experience in the eyes of the viewer,” wrote Ben Smith, Hulu’s Head of Experience, on the company blog. “We are super excited about our first steps into VR.”