Tim Cook started Apple’s press conference with a surprising statement. After announcing that there are now 1 billion active Apple devices, Apple’s CEO then talked about the ongoing conflict with the FBI.

“We built the iPhone for you, our customers. And we know that it is a deeply personal device,” Cook said. “For many of us, the iPhone is an extension of ourselves.”

Apple has made it clear that the company doesn’t want to unlock the iPhone 5c involved in the San Bernardino case because it would compromise the privacy of millions of users. A backdoor for the FBI is a security hole, and hackers could take advantage of it.

“A month ago we asked Americans across the country to join in a conversation. We get to decide as a nation how much power the government should have over our data and over our privacy,” Cook said.

By releasing a letter, Apple has taken a strong stance on this issue. It has become part of the public debate for the past month, and the company will be at its first hearing tomorrow in California.

“I’ve been humbled and deeply grateful for the outpouring of support we’ve received from Americans across the country from all walks of life. We didn’t expect to be in this position at odds with our own government, but we believe strongly that we have a responsibility to help you protect your data and to protect your privacy,” Cook said. “We owe it to our customers and we owe it to our country. This is an issue that impacts all of us and we will not shrink from this responsibility.” 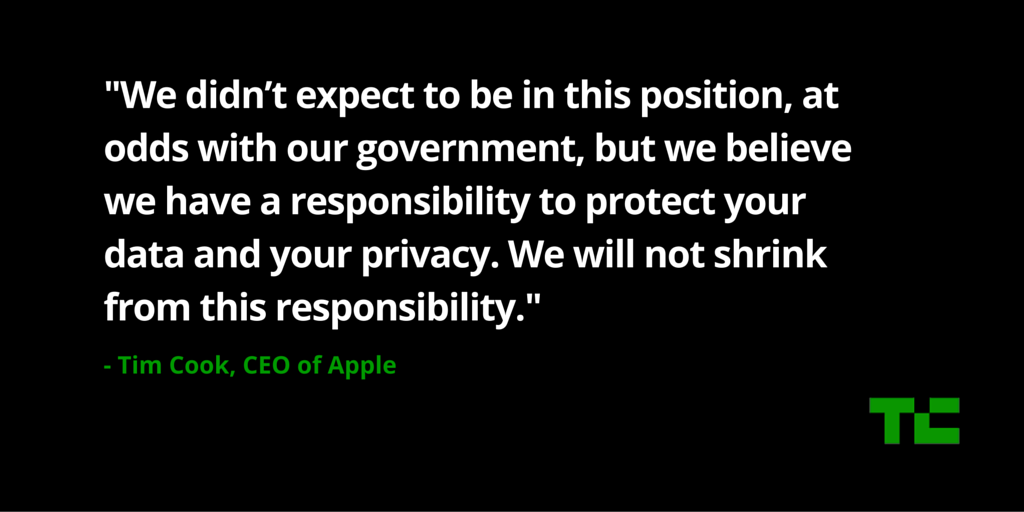