As promised last fall, Nintendo has launched its first mobile smartphone application – but it’s not a new Mario game, and the app is for now only available in Japan for the time being. Today, the company unveiled “Miitomo,” a social app that lets users create cartoon-like avatars of themselves – like the “Miis” that Nintendo introduced with the launch of the Wii gaming console years before.

Users can customize their Miis with different hairstyles, facial features, outfits, accessories and more. You then give your Mii a nickname, customize how it speaks, and choose its personality. Users can also create their Mii using a photo taken from their device’s camera.

An in-game shop lets you buy more items for your Mii, like new outfits to wear. And you’ll pay for the items with Miitomo coins, which you can either earn through game play or direct purchase. 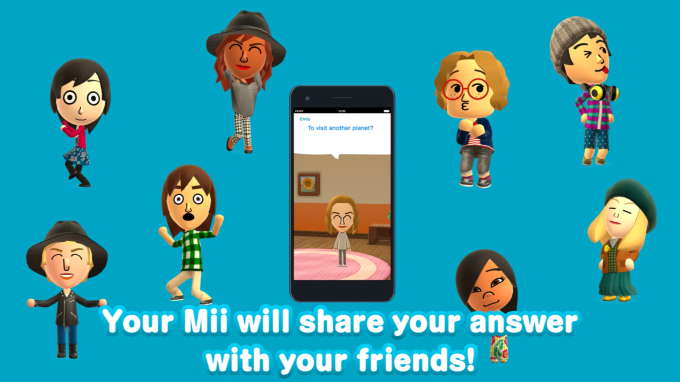 However, unlike on the Wii where the Miis represent a user’s gaming profile, the Miis in the new app are more social.

The app asks users “get to know you”-type questions, like “Where did you go last weekend?” or “What tv show are you watching?” or “What was your most recent purchase,” for example. After you’ve answered some questions, your Mii ventures out into the game’s world, meets up with other Miis, and exchanges answers.

Yes, it’s a little weird. Like a virtual world where the questions and answers are pre-recorded, then played back. But even if the app leaves older Nintendo fans scratching their heads, it could have an appeal for younger kids as a precursor to participation on larger social networks, like Facebook.

Beyond chatting, your Miis can be placed into photos, which can be customized with stamps, fonts and backgrounds then shared on social media, like Facebook, Twitter and Instagram. The photos can also come from your own photo library, instead of those provided in the app, if you choose.

In addition to the social aspect, Miitomo includes a mini game called Miitomo Drop, where you drop your Mii into a play field then watch it bounce around as it falls towards the bottom of the screen. Here, it will land on a prize of some sort – some of which will be exclusive to this part of the application, and not sold in the game’s store. Again, to play this game, you’ll need coins or game tickets, the latter which can be won as a daily bonus.

Miitomo is live in Japan as of today on both iOS and Android, but will be released in the U.S. in the future. (Nintendo hasn’t offered a time frame.)

Despite having one of the most iconic video game franchises ever, with its Mario line of games, Nintendo has held off on entering the smartphone gaming market, despite user interest. It has instead focused on developing its own consoles, like the poorly performing Wii U, and the forthcoming, code-named “NX.”

The new app is the first of several planned for the next 12 months, the company told The WSJ and others. Execs have even hinted that they’re considering Mario apps, and understand the demand, but won’t confirm any of the future apps’ details.