Veritas Genetics was one of the first companies to sequence the entire human genome for less than $1,000 in 2015. It’s now taken that technology a step further by delivering the results of your entire genome in an app.

The promise of whole human genome sequencing for less than $1,000 was somewhat of a catchphrase in the scientific community. Most consumer DNA companies still only give you specific sets of what’s in your DNA using gene panels. You can get about 60 test results from gene panels using 23andMe, for example. 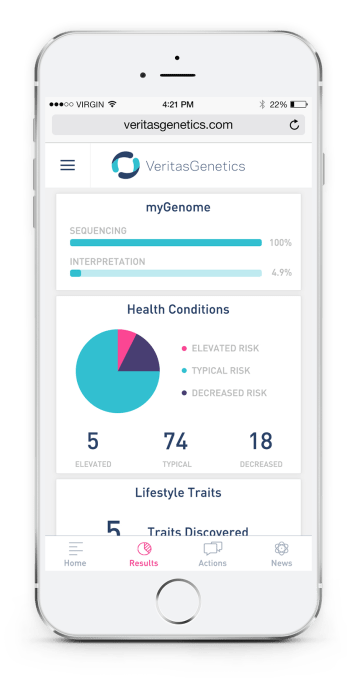 But for $999, Veritas says its myGenome product will deliver the whole shebang to your smartphone. The cost includes test results and the benefit of genetic counseling to help you decipher what those results mean for your health.

So someone with a genetic predisposition for breast cancer or Parkinson’s disease will get a heads up and information on possible courses of action. For instance, Angelina Jolie found out she carried the same breast cancer gene BRCA-1 as her mother and opted for a double mastectomy before the disease had a chance to develop.

That might cause trouble for some companies hoping to cash in on the progress we’ve made. Genetics providers have run into trouble with the government for providing test results dealing with health conditions in the past; one of the biggest, 23andMe, had to pull back and work on approval from the FDA for a couple of years before being allowed to provide test results for certain health conditions.

Veritas runs its tests in a CLIA-certified lab and requires an order from your doctor first before sequencing your genome, so it may be okay here, but things could still go wrong.

We aren’t able to modify human genes just yet (not legally in the United States, at least) but you can see where this is going. The lower cost and ability to access the results of your own DNA could lead to a greater demand from the public and break down the laws preventing genetic engineering as medicine.

While some might see that as the trigger leading to some dystopian Gattaca scenario, I’m excited to see where this type of technology leads us, and the lives it can possibly save and even improve.