Peeple, the controversial people-rating application that lets its users rate and review anyone, is not a hoax or vaporware, as many suspected following the media backlash surrounding the unveiling of the company’s intentions last fall. The Washington Post even called the app “terrifying,” given that the app didn’t plan to allow users to opt out of being reviewed — a feature that remains in the version that launched this week.

With the app’s debut, the company is trying to present itself as having a more positive aim and image, with gestures toward anti-bullying and settings for hiding unwanted recommendations. However, there are still valid concerns that the company is planning to profit by selling access to the hidden negative reviews left on its platform.

In case you missed it the first time around, the Calgary-based startup comes from Julia Cordray and Nicole McCullough — both non-technical founders who outsourced the app’s development to Y Media Labs. The app was described as a “Yelp for humans.” That is, you can sign up to leave reviews of anyone you know — from co-workers and bosses to exes and friends or even local service pros.

McCullough’s LinkedIn profile said she was inspired to create Peeple as a means of vetting people, like contractors, babysitters or neighbors. Of course, services for rating professionals and businesses, including Google’s business reviews, Yelp, ZocDoc, Angie’s List and others have existed for some time. Peeple’s differentiator was that it wanted to venture into the personal space, as well.

It was unclear at the time if the founders were genuinely naive of the problems such an app could incite, or if they were smartly playing up the “all press is good press” angle to encourage viral buzz about the service.

But when the app didn’t launch as expected in late 2015, it was written off as vapor and simply forgotten.

In a press release, the founders wrote of how much they were harassed following the bad press the app received, which they said was “ironic” as the complaints involved concerns about the potential for cruel bullying, threats and abuse that could take place on its platform.

The company also said it made several changes in light of those concerns, including giving users full control over what goes on their profile, offering the ability to deactivate their profile and more. The company noted, too, that “no one can add you to the app” — making it sound as if being reviewed on Peeple is an opt-in experience.

That’s not entirely true, however.

Peeple’s own website says you can still write “recommendations” (i.e. reviews, but not necessarily positive ones) for anyone who’s not on the app, then choose to invite that person to join Peeple.

In other words, even if you’re not participating, someone could write your review. Sure, that review might not be public, but it exists in a digital format on the company’s servers.

If you choose to join Peeple, you can decide which reviews appear on your profile.

The Truth License — a way to buy access to negative reviews

The concerning aspect to Peeple is that it’s considering offering access to these hidden and negative reviews as a paid subscription. 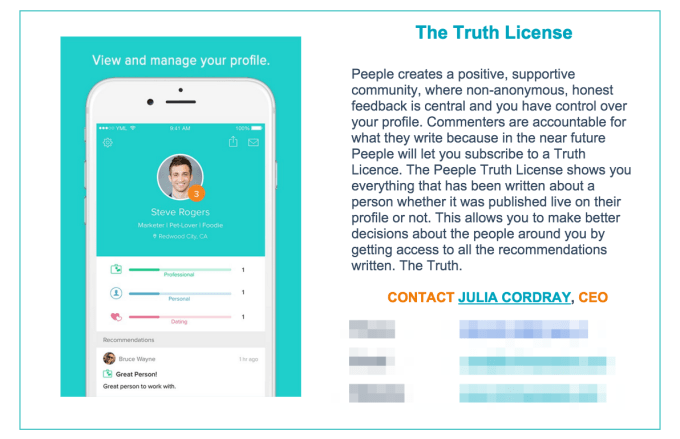 Called the “Truth License,” Peeple says that paying users would be able to read anything that has been written about a person, whether or not the person published the reviews on their profile.

Or, to sum up: Peeple’s plan is to profit by selling access to everyone’s negative reviews.

Co-founder Cordray clarified to TechCrunch that the Truth License is not actually live, but is something the company is “considering” as a future feature alongside other in-app purchases like in-app search credits, gifts and personality testing.

That being said, the fact that it’s on the table at all — and promoted in the company’s press release — should give users pause for concern.

Not only that, but the company doesn’t seem to have a solid plan to proactively prevent cyber bullying through the service. Its terms apparently prohibit things like “profanity, bullying, health references, disability references, confidential information, mentioning other people in a recommendation that you are not currently writing a recommendation for, name calling, degrading comments, abuse, derogatory comments, sexual references, racism, legal references, hateful content, sexism” and more.

But Peeple’s Terms are hard to read, as they’re only linked to in the app itself, and are several pages long. But this snippet should give you an idea of what Peeple is really up to, noting that:

“Once Content is published it may not be able to be removed,” and that by joining, “you hereby irrevocably grant to Peeple the continuous, non-exclusive, royalty-free right to use your Content for any purpose whatsoever and in any format. These rights shall be assignable, transferable, and licensable by Peeple.” 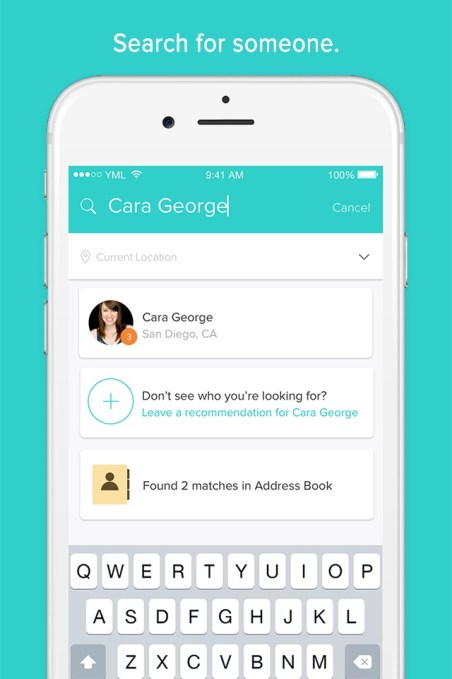 In practice, it doesn’t seem that Peeple plans to actively police users on the service, either. Asked what Peeple would do if someone violated the terms by creating a fake Facebook account (that is, for the sake of publishing negative reviews without being associated with them directly), Cordray responded that the fake accounts would be removed.

But, she added, “keep in mind we ask for your help in combating this by reporting and blocking users.”

And let’s remember that to block and report users, you have to be a user — which mean you’ve agreed to Peeple’s terms.

In short, it appears the plan is to reactively handle abuse claims, much like larger social services like Twitter do (and struggle with) today. But for a service that involves providing a blank slate for the sole purpose of letting users write people recommendations, not having some basic, automated moderation system in place to at least block profanity and other keywords is either a glaring oversight or an intentional (and callous) decision.

If the latter, it’s likely one that’s designed to beef up the company’s private database of bad reviews marked for sale.

I mean, this whole thing is in such bad taste that even though the app is live, it’s hard to believe that we’re still not being trolled here somehow.

(Unfortunately, it’s impossible to test the app without agreeing to Peeple’s onerous Terms, so we chose to opt out. Though a fake Facebook account would allow for testing this app safely, creating that account would violate Facebook’s terms, which we are declining to do.)

One possible spot of hope is that Apple has a policy against apps that promote harassment (i.e. Section 14.1 of its Review Guidelines), so it’s possible that the company will actually step in at some point to ban Peeple from its App Store.

Peeple is live on the iOS App Store for the time being. (TechCrunch is choosing to not provide a direct link.)