The only thing constraining me in virtual reality was my couch potato bod and a crippling realization that footage of me using the device would live forever on the web.

This is life with the Virtuix Omni, a $699 device that allows you to walk through virtual reality while wearing a VR headset.

This isn’t as radical an idea as it may appear. Old people of VR (which in my book refers to anyone older than 25) will likely remember the 90s VR arcade setups allowing users to move slowly through Tron-like space in a similar weird treadmill cradle. Virtuix’s Omni is the next evolution of that idea.

Virtuix sold over 3,000 of the devices in its original Kickstarter campaign for the Omni in June of 2013, but it didn’t start shipping the device until earlier this year. 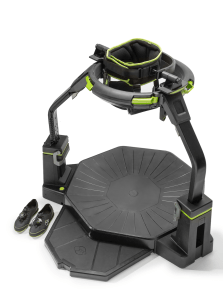 It all starts by getting strapped into the harness safeguard thing while wearing special low friction shoes. It’s not actually a treadmill, it’s more of a slippery concave bowl that you’re constantly running up the sides of. It isn’t the most comfortable experience but it’s definitely easier to get situated with the device than one might immediately assume.

It’s a niche experience, and one that I honestly can’t imagine existing in too many human beings’ homes within the foreseeable future, though the company did tell me they are still months away from fulfilling all of the orders they’ve already gathered. The user’s actions in the device are translated into analog directional movement so the entire system should be compatible with any VR game where you’re off exploring digital worlds. To avoid any threats of motion sickness, movement is generally 1:1 so if you’re planning on traversing Skyrim in VR you may want to keep drinks and snacks within reach as the device can definitely get tiring to use.

With VR-geeks already finding large open spaces in their homes to account for the HTC Vive’s room-scale tracking, the Omni definitely allows an exponential expansion for exploring digital environments with really physical motions. The argument could be made that the Omni is actually a space saver since its footprint is much smaller than the larger room-scale setups, but in reality the statement this thing makes is much larger than the space it takes up. The device itself feels like a giant toy that Richie Rich would have in his basement. The Omni was a lot of fun to play around with but it’s definitely something better suited to try than to own I’d imagine.

Virtual reality has its issues when it comes to traversing space and a device like the Omni could theoretically serve as a solution, but there’s still a long way to go before the tech is ready for the average VR consumer, a niche that’s already pretty focused compared to the average regular consumer.