Plane is a new social app from Tim Allison, who previously founded Cupple, the relationship app acquired by YC alumni Pair (which since re-branded to Couple and was sold to Life360).

Born out of Allison’s own frustrations, after he moved countries, Plane is pitching itself as a ‘social icebraker’, and lets anybody post a short location-based message — called a ‘Signal’ — to be read by other users in the same city. You can reply publicly to a Signal, which disappears after 24 hours, and optionally swap ‘social cards’ and exchange private messages. 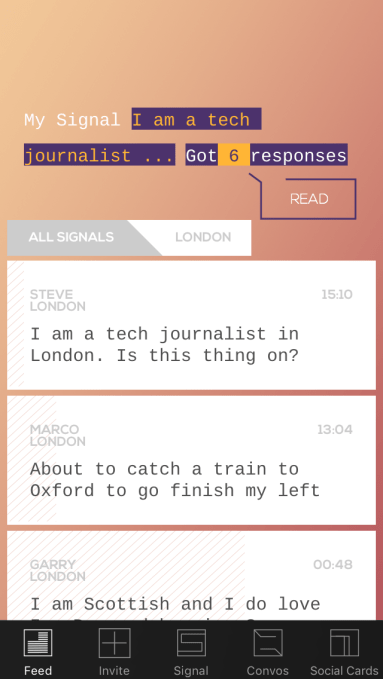 In other words, Plane mixes features from Twitter, Snapchat and Facebook, and also crosses over with something like Yik Yak, the location-based social app popular on university campuses.

Allison tells me the idea was initially conceived to serve the needs of expats, but since being soft launched in Copenhagen two months ago is already resonating with a wider group of users. “We’ve found that the ‘expat’ group is increasingly hard to define,” he tells me. “People live, work and love all over the world and operate in all sorts of ways.”

Plane is built on the premise that when travelling to a new city it’s hard to break the ice, unless you already have an established network. Instead you’re largely left with the option of signing up to a bunch of dating apps or joining a noisy Facebook or Meetup group.

“I worked for 12 months commuting in and out of Switzerland every week and working on a large international campus,” explains Allison. “Whilst actually living in the city during the week it was really difficult to break the ice with new people and actually find out what was going on. I don’t want to use dating apps, most expat forums are quite old-fashioned and for a lot of people, ‘meetups’ can be quite daunting.”

To that end, Plane focuses on the city you are in and lets you share Signals to a community of users around you. The intention was to do away with selfies or other profile photos — the app is almost exclusively text-based — and because public messages expire Allison says there is less pressure to compose the perfect Signal.

“We’ve found users express themselves with a certain freedom and creativity you might not find on a more visual and permanent based network,” he adds.

Of course, like any social app, Plane will need to scale quickly to benefit from much-needed network effects. Right now, a day after fully launching, the London stream is fairly barren. That said, the startup has already raised an undisclosed round of angel funding.

I understand that Plane’s backers include Hampus Jakobsson, who previously founded The Astonishing Tribe (TAT), the mobile User Interface company that BlackBerry acquired in 2010.