CEO Kyle Hill spent a lot of time building technology for his parents that would help them find better service for their aging family members — who were around 2,000 miles away across the country. So, when his last startup idea didn’t work out, he decided to bet the company on a new idea around that.

That’s why he launched HomeHero, which is now partnering with hospitals to connect home care providers to patients, and is launching a mobile application that helps people monitor the health of their family members that are under the care of providers hired by HomeHero. The company is also following the steps of other startups by converting its contractors to full-time employees with salaries and benefits. 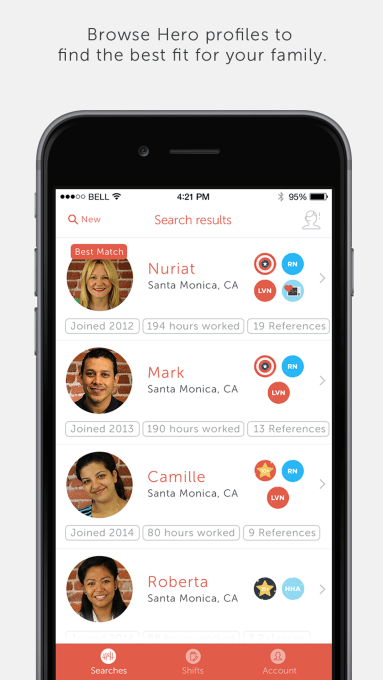 HomeHero has been working on the program for about 6 months, Hill said, which helps manage hospital discharges and connects them to HomeHero caregivers. In most cases, Hill says, seniors leaving a hospital don’t necessarily need highly skilled nurses to care for them — they just need someone around the house to help out by managing their diet or installing bars in the home. So it gives hospitals an incentive to find the best in-home caregivers to reduce their risk of readmission and the overall cost of care.

Originally a direct-to-consumer app that connected families with a marketplace of caregivers, HomeHero is now expanding its reach beyond the consumer-facing aspects of in-home care providing in what seems like an attempt to stave off the competition. That’ll be important going forward, as the space heats up and other competitors emerge. If HomeHero can get in front of patients before other services, it has a better shot of securing a client for its in-home care service.

“You look at it as a shift from Dropbox and Box, where Box was focusing on a lot more of the enterprise, we’re doing something similar with hospitals,” Hill said. “We’re not abandoning our direct-to-consumer business, but we see an opportunity to partner direct with these health systems.”

Hospitals are incentivized to help prevent repeat hospitalizations. So the challenge here is to try to reduce readmissions as much as possible, which means using technology to detect when a patient is at risk. One way HomeHero does that is by asking caregivers a series of questions that are customized on a per-patient basis — such as asking whether they are noticing any weight gain or loss — to determine whether or not it needs to intervene with more highly skilled care.

Of course, there are others in this space, including a well-funded startup called Honor that builds a mobile application that connects families with home care providers. Hill says that HomeHero offers connectivity with both consumers and hospitals, which will better encourage the use of HomeHero over other services.

“We do everything in our ability to keep them safe and keep them happy, and a lot of times we’ll hold onto that patient for years to come where they’re no longer at risk to readmission,” Hill said. “Even if it’s being paid out of pocket we develop a really good relationship with that family. You can look at it like a lead generation service.”