This Wednesday at 6:46 pm EST, SpaceX is scheduled to launch the SES-9 communications satellite from Cape Canaveral, Florida with their Falcon 9 launch vehicle. The mission will mark the company’s second launch of the year.

Wednesday’s mission will be coupled with a first stage landing attempt on SpaceX’s autonomous drone ship, “Of Course I Still Love You.” The floating barge, like its sister ship “Just Read The Instructions,” is named after a starship in the late Iain M. Banks sci-fi novels.

Sea-based rocket landings, are considered to be more difficult than ground-based landings. It’s a smaller target area and the drone ship itself is constantly moving because of the motion of the sea. Once SpaceX successfully landed a Falcon 9 first stage on land at Cape Canaveral back in December, it would be reasonable to question why all future launches aren’t attempted on stable ground.

There was a lot of discussion around why SpaceX would choose a drone ship landing over a more stable landing pad. NBC News suggested that a drone ship provided “more flexibility in when and how launches can proceed.”

On twitter, however, Elon Musk said that the primary reason has to do with the speed that’s required to send the payload into orbit.

It seems like an issue of semantics, but Musk is saying that the root of the cause is really how fast that rocket needs to go in order to complete its mission.

For orbital launches, a payload requires an arc-like trajectory and a sufficiently high velocity to complete an orbit around the Earth. In order to bring the first stage back to a launch pad, additional lateral maneuvers are required. This is on top of the deceleration maneuvers needed for all soft rocket landings.

Depending on the rocket’s velocity and the mass of its payload, there may not be enough fuel to get back to the launch pad. Bringing a drone ship away from land and out closer to the trajectory of the rocket can reduce the fuel required for a landing. For certain missions, this may be the only option for rocket recovery. 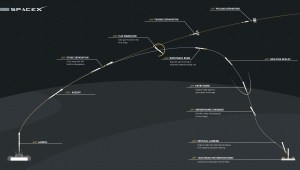 Of course sometimes there are other factors that play into that decision as well. SpaceX’s launch of NASA’s Jason-3 satellite included a drone ship landing not because of fuel issues, but because the company didn’t receive the necessary approval to bring the rocket back to land.

@JimmyVosika Actually, didn't get environmental approval in time, but it was also good practice for missions where a ship is needed.

With this in mind, it’s not surprising that SpaceX would choose to land their rocket on a drone ship for this particular mission.

A full-duration static fire test was completed on Monday, which puts SpaceX on track for their scheduled launch on Wednesday.

Recently, SpaceX has invested a lot of energy into their live stream coverage of launches. The coverage has included co-hosts that explain what’s happening throughout the launch and other interviews to provide more detailed background information about the mission. For Wednesday’s launch, SpaceX will be hosting their live stream on YouTube.