Razer, the gaming technology company based out of Southern California, has raised another round of funding, a Series C that values it at $1.5 billion, TechCrunch has learned. The backing comes in part from China, specifically the Digital Grid subsidiary of IT company Hangzhou Liaison Interactive. Yesterday, Hangzhou published a statement (a link first published by Reuters) confirming the 5.01%, $75 million investment in Razer, as well as its valuation.

TechCrunch understands that the $75 million is part of a “much larger” Series C investment.

Contacted by TechCrunch, Razer said it would not provide more details about other investors at this time, nor the final size of the round.

The participation of Digital Grid — which has backed other companies in the area of smart devices and virtual reality — underscores the bigger direction that we have seen Razer take as a company in the recent years and its intention to keep pushing ahead into new ways of gaming.

Razer — company tagline “For gamers. By gamers” — made its name originally around peripherals like mouse controllers and keyboards that improved the PC gaming experience. But it has used its strong brand within the gaming community to expand into gaming-optimized laptops and other consoles.

And, to make gaming experiences more immersive, Razer has been doing a lot more with wearables and virtual reality devices, most recently with its new $200 Stargazer webcam.

The Stargazer uses Intel RealSense tech to supercharge the video experience with artificial intelligence. The camera not only detects your motion and puts you deeper into the game’s action, but can be used for security ID and much more.

But forging ahead with new hardware and specifically wearables — a relatively new and untested area of the market — comes at a price. The documents unveiling the Razer investment also makes note of some of the company’s financials that detail a swing to a net loss between October 2014 and September 2015, compared to a net profit in fiscal year 2014, along with revenue and related figures, translated here:

For some background on Razer’s fundraising history, in 2014 we uncovered (and later confirmed) that Razer raised a strategic round of funding from Intel that valued the company at $1 billion. Others who have previously invested in Razer include Accel and IDG Capital Partners. These appear to be detailed in the “other” category in the cap table published by Hangzhou Liaison Interactive (also translated from the document): 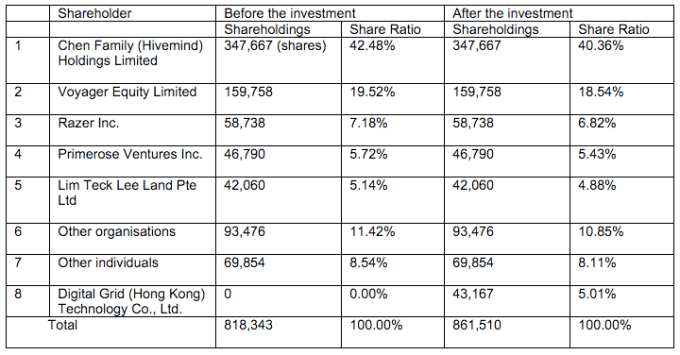 Considering another potential investor, Razer has also worked on products with Lenovo, specifically computers designed for high-end gaming. The financial relationships behind that partnership has never been detailed.

It’s not clear if Intel is part of this latest round, either, but interestingly Intel has invested alongside Digital Grid before. For example, the two were part of a $24 million round raised by Avegant, makers of Glyph, the VR headset that looks a bit like a pair of headphones when in rest mode.

We will update this story as we learn more.