Epson is showing off the new Moverio BT-300 today in Barcelona at the Mobile World Congress 2016, the latest and most advanced member of their Smart Glasses family of products. Pre-production models are on display at their booth in Congress Square and demonstrate many advances over previous Moverio models.

As a recap, Smart Glasses are eyeglasses that—utilizing a variety of technologies like projection or holography—can project in-line digital content into the wearer’s field of view.

This is important to note because on the lenses of Smart Glasses, a true black projected tone equates with the absence of color and therefore total transparency. This means the new Si-OLED displays in the BT-300 blend projected digital content much more realistically with the actual world you see while wearing these glasses.

Other advances include another 30% reduction in weight which means this model will be in the range of 60 grams.

Thirdly, the BT-300 now uses an Intel Atom 5, 1.44 GHZ Quad core chip and is also powered by Android 5.1 which widely expands the complexity of apps that can be written for the glasses.

If you want all the specs, Epson just released a video demonstrating some use cases and an accompanying comparison chart to explain the differences between the BT-300 and older models. 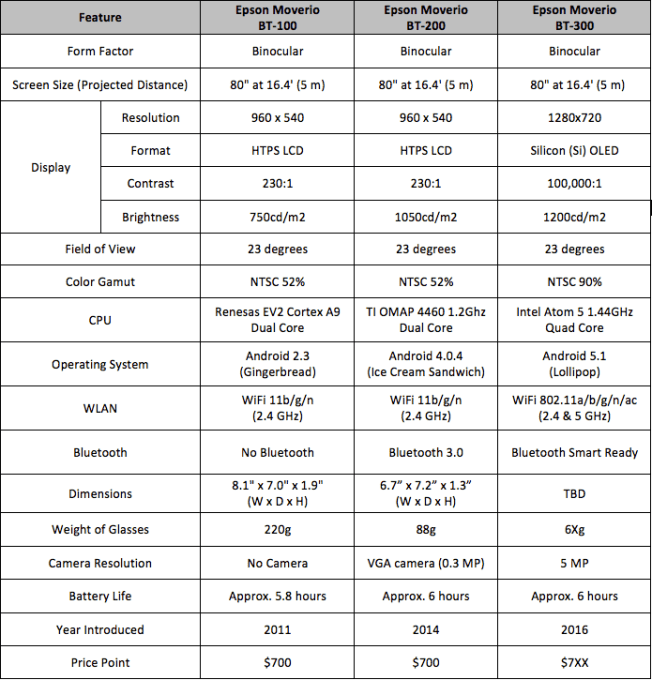 There are wide-ranging uses for the glasses according to Leyva. These include:

While there are some consumer use cases listed above I think it’s still important to reiterate that Epson’s strategy primarily promotes the BT-300 as an enterprise or industrial product. It therefore seems reasonable that Epson chose to keep the processing unit that powers the glasses attached by wires instead of wireless. (You are not, after all, wearing this thing to a cocktail party…you are wearing it as a tool to complete specific tasks and jobs).

They likely are able to avoid overheating and latency problems as a result. Plus it provides 3 programmable buttons which was a developer request.

Pricing is not available this early but it’s safe to say that they intend to keep the BT-300 in the pricing realm of their other products (probably in the $700-$800 range). At this point they intend to begin shipping units in Q4 of 2016, but that could change.