LG today at Mobile World Congress 2016 took the wraps off its flagship mobile products for the coming year. Chief among them is the G5 smartphone, a handsome device that feels fantastic in the hand and sports an expansion-type system that can utilize accessory packs. It’s fun.

The company also announced a lightweight VR headset and a 360 VR camera because VR is all the rage at MWC 2016.

However, LG is not talking pricing at this point. The company says the products will ship in the coming months.

The G5 is the company’s latest flagship device. Like previous models, the G5 has a swappable battery, but changing the battery in this model will hurt a bit less. The G5 has a small button on the side that when pressed, pops off the bottom of the phone and with it, the battery. Previous models required the owner to remove the entire back of the phone. It wasn’t pretty on fingernails.

LG designed this feature to host accessory packs. At launch G5 owners can buy a camera pack, called the LG Cam Plus, that adds an additional battery and physical controls for the G5’s camera like a dial for zooming and a shutter button. This pack combines with the phone’s standard battery, providing 4,000 mAh of power.

The second pack is an improved speaker and a headphone amp designed in part by Denmark’s B&O. This pack adds an additional headphone jack to the phone. When used, it serves up audio to the connected headphones by way of a 32bit DAC. The phone itself employs a 24-bit DAC.

These packs will add additional features to the phone, but using them requires the owner to reboot the phone since the battery is automatically pulled when removing the bottom piece. It feels like a critical flaw. 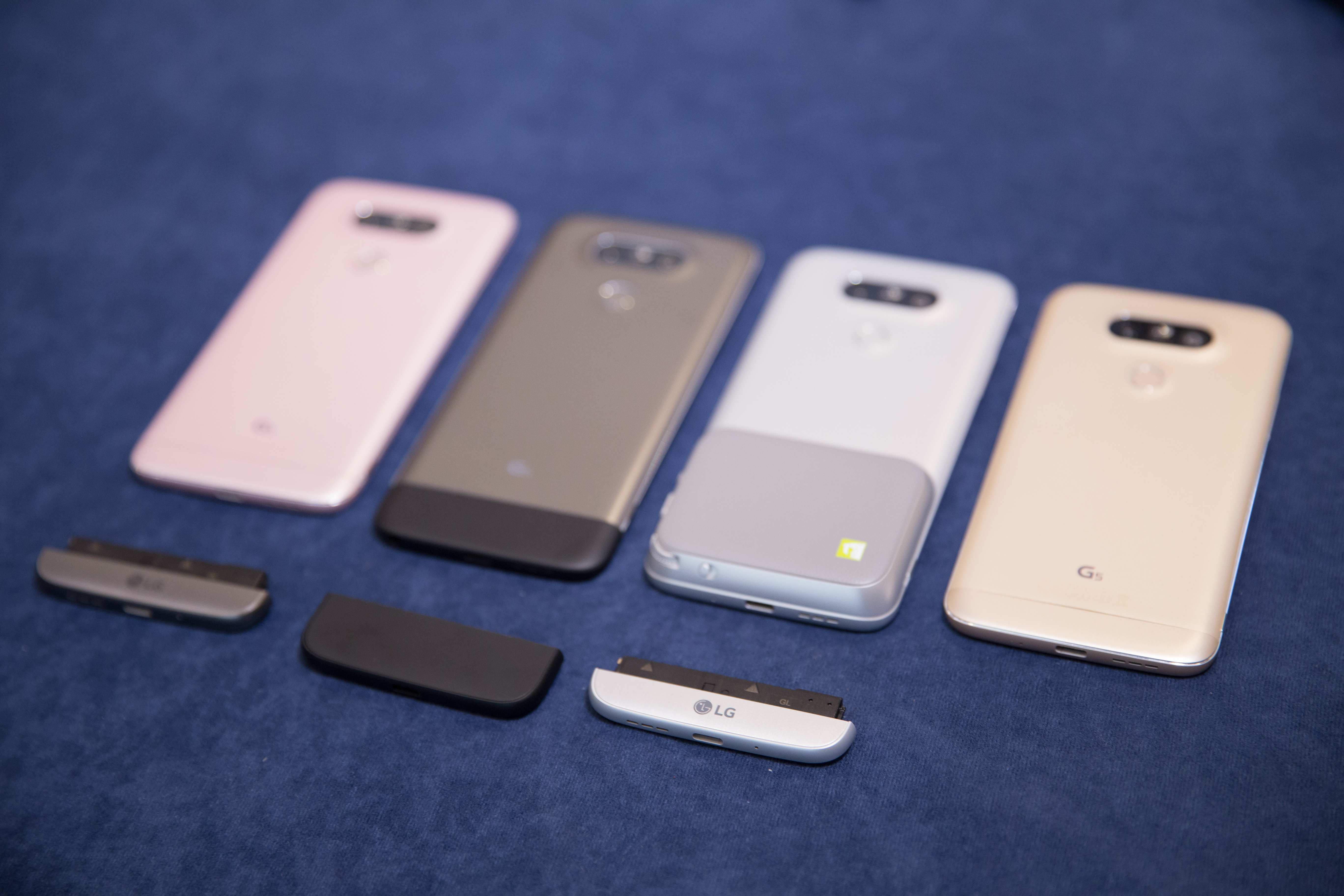 The backside of the G5 houses dual cameras. One has a standard 78-degree lens while the other rocks a 135-inch lens, which LG says is the widest available on any smartphone.

Interestingly enough, the G5 does not run stock Android — nowhere near, in fact. LG removed the app launcher from the phone’s native OS, instead deploying a custom experience closer to that found on Xiaomi’s Android phones (or iOS).

Like the LG V10 before it, the G5 sports a display that’s always on. When the phone is not in use, it will display the time and select notifications. LG says this feature only consumes 0.8 percent of the total battery life an hour and likes to point out how many times smartphone users toggle on their display just to find the time.

LG has long trailed Samsung, Huawei, Xiaomi, and Lenovo in worldwide marketshare, but it’s gaining ground in the U.S. where according to comScore, it accounts for 9.9 percent of the total smartphone market. It’s second only to Samsung in the States.

I spent a few minutes with the G5 and was impressed. The phone feels great. The body is constructed entirely out of metal, and there isn’t a sharp line on the device. Combined with the replaceable battery, memory card slot and top-tier specs, the phone is not a letdown. Here’s more.

The G5 feeds the 360 VR content over a USB Type-C connection and at this time, the headset only works with this specific phone.

I tried it on. It works as advertised though the lower-resolution screen is noticeable. Users either have to use Bluetooth headphones or plug headphones into the headset, resulting in a mess of cables. But it is light and comfortable. At only 100 grams, it’s significantly lighter than the Samsung Gear VR, which weighs 456 grams when a Galaxy S6 is attached.

LG’s vision, for better or worse, is for users to carry the 360 VR with them and use it even on the subway or airplane.

Again, LG is not saying how much it will cost. If priced competitively with the $100 Galaxy Gear, it could sell well. Anymore though, it seems overpriced given the capabilities.

LG also unveiled a camera to go along with its headset. The LG 360 Cam is a small, handheld camera, reminiscent of the HTC Re. It uses ultra-wide angle lenses mounted on the front and back of the device to capture content.