HTC has just dropped the most salient detail for anyone wanting to immerse themselves in the virtual reality experience it’s been cooking up with Valve for the past year: the price.

The forthcoming Vive headset will cost $799, the two companies confirmed today. So $200 more expensive than the rival Oculus Rift headset.

Oculus revealed last month its VR headset will cost $599. It also said the Rift would start shipping in March (although it’s more a case of an unknown number of units will ship in March, with other pre-orderers bumped to waiting till April for theirs). The retail launch of the Rift is April.

Now before you start tweetstorming your rage at HTC-Valve about how much Vive is going to cost — given Oculus was slammed for pricing the Rift at two hundred bucks less there’s bound to be some unhappy VR fans today — the headset is being bundled with two controllers.

This is in addition to all the other stuff you’ll need to power the Vive’s 360-degree tracking experience (e.g. the two base stations that you position in your room) — and what they dub its “room scale exploration” — so they’re marketing $800 as “the complete package.” Which is of course a not-so-subtle dig at Oculus, given that the Rift controllers are delayed til the second half of this year, and — crucially — are not included in that rival $599 price-point.

So at this point we don’t exactly know how the Vive pricing compares to the Rift as Oculus has not disclosed how much its controllers are going to cost when they do arrive later this year (but has confirmed Rift buyers will need to shell out more to get their hands on the controllers).

The ship date for the Vive remains this coming April — albeit HTC-Valve are now couching this as “early April,” likely aiming to encourage consumers who might be tempted to pick up the Oculus to hold on a bit for the Vive instead — and get a VR headset with two controllers… Also included in the Vive $799 bundle for “a limited time” are two free games. Details on those titles below.

“Actually we’re really excited about our price,” said HTC’s Dan O’Brien, VP of VR, planning and management. in a briefing with journalists earlier today, when asked how it would be justifying the Vive’s $799 price-tag.

“Because it is the price for the complete system. It is the price for a system with input and controllers. For 360-degree tracking at full room scale. With safety and chaperone. All the things that we’ve thought about to make it the best possible experience. That’s what that price is for. And we feel really good about it. It’s giving that user that one-time, out of box, it’s all there for you.

That said, it’s not actually the complete package. Because buyers will still need a powerful enough PC to plug into and power Vive VR. Now they might already own such a PC. Or they might need to upgrade/buy a new machine that’s capable of powering the Vive’s VR. But either way the all in cost is higher (also true of Oculus, of course, which needs a gaming PC to power it too). So there’s still a little spinning going on here with the talk of a ‘complete package’. (A ‘complete incomplete package’ is closer to the reality.)

On the PC power requirements for Vive, Valve’s Chet Faliszek told journalists: “We have a recommended spec, because calling it a minimum spec’s a weird thing because really I could make something run on a 580. You’re probably not going to want to have that kind of experience, you’re going to want to have something that’s more rich, more full. And so what we’re saying is 970 on the Nvidia side and a 290 AMD and a mid-range i5.”

“You talk to the GPU vendors they’ll tell you that while overall PC sales may have been down, high end PC sales have been up. And that’s continued to be going on. So this will just help accelerate that,” he added, talking up the appetite of people to shell out for VR-capable PCs.

“A lot of it’s driven around the GPU card… We have future announcements coming with partners on the GPU side and on the PC side,” HTC’s O’Brien added.

He also side-stepped specifying how many games will be ready to go at the Vive’s launch — saying the companies intend to flesh out details about the “experiences” that will be available for Vive at the GDC games developer conference in San Francisco next month.

The two games that are being initially bundled with the Vive are: Job Simulator: The 2050 Archives, made by Owlchemy Labs, which offers VR users the chance to be transported to a theoretical future where robots have destroyed all human jobs so they can then try out simulations of what these human job things used to be like in VR… 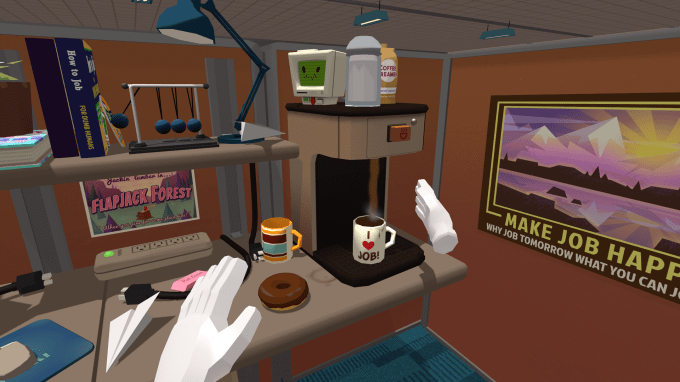 And Fantastic Contraption, made by Northway Games & Radial Games, which sounds like a sort of Minecraftian style construction play, where you get to build virtual stuff and see how it operates in the grassy playground of the game world… 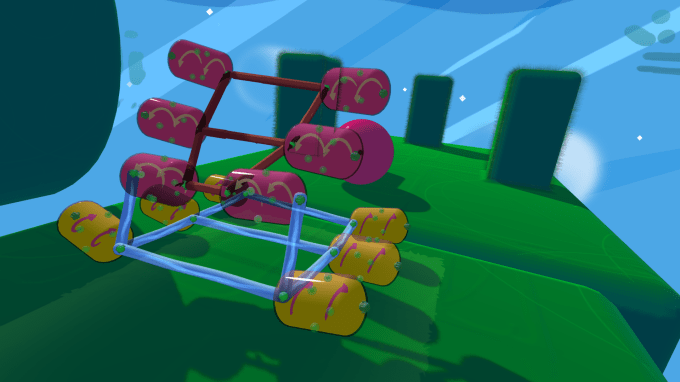 On the “limited time” caveat — i.e. how long the two games will be freely bundled with a Vive purchase — Faliszek again declined to provide specifics now, saying there will be more details “coming up”.

He stressed generally that Valve’s philosophy with the Vive is to encourage developers who are building VR games/experiences for it to build for other platforms too, flagging up a recent announcement of a collaboration with Unity to offer native support for SteamVR in the Unity Platform as an example of how it’s looking to reach out broadly to game developers when it comes to Vive.

“For us I think it’s important that we’re not keeping anything on the Valve side in house, just to ourselves. We’re always sharing with the community and making sure everybody gives things back,” he said.

“One of the things we did early on is we… disengaged Steam from what we call Open VR. And Open VR you can target as your platform and it will actually work with the DK2 which is available publicly as well as a couple of other people are porting it as well now… but the idea there is… for the headset part of it, you almost have to break it to not have it work. Because what everyone’s trying to do is the same thing. And where you start to get on differentiating is controllers. And we want to have that one-to-one interaction going on, so what’s important to us on the Steam side is we’ll tell every one of our developers publish everywhere,” he added.

Another interesting tid-bit the two companies revealed today was that Vive will include “phone services” — making use of the Vive headset’s built-in microphone. The idea being that users will be able to do things like take and make calls without having to step outside/pull the VR headset off to do so. Viewing and responding to messages, and viewing other elements like notifications and calendar appointments will also be possible within Vive.

The Vive’s operational range is 1.5m to 5m. HTC’s O’Brien said there are no physical limitations in terms of the kind of space you can use the Vive — with the company even showing marketing material depicting the Vive being used outdoors (with a base station mounted on a pole). Albeit you’d need a power source to plug the base stations and your PC into to make that scenario work.

He also noted that the base stations don’t need to be cabled together but can be linked wirelessly.

“They don’t have to be mounted at 7ft high at a 45-degree angle,” O’Brien added. “Put them on a book shelf, put them on a desk. Take it out of the box and just set them up and you’ll have a great experience. We do this for an optimal experience when we’re doing that [mounting them in very specific positions]. And some people will want to do that in their homes, and mount their base stations and we made that super easy for them to do that as well but it’s not necessary.”