Richard Branson’s Virgin Galactic unveiled its new SpaceShipTwo rocket plane today. This is the latest version the company has revealed to the public since their deadly crash during a test flight with the previous version.

In a tweet, Virgin Galactic specified that the new vessel , the VSS Unity, was actually named by Stephen Hawking who also expressed enthusiasm for the future of commercial in a message shared via Twitter, “If I am able to go & if Richard will still take me, I would be very proud to fly on this spaceship.”

Prof. Hawking names the new #SpaceShipTwo VSS Unity. "We are entering a new space age, and I hope this will help to create a new unity."

In a blog post yesterday, the company emphasized that the new SpaceShipTwo will not be used in test flights any time soon.

If you are expecting SpaceShipTwo to blast off and head straight to space on the day we unveil her, let us disillusion you now: this will be a ground-based celebration. – Virgin Galactic 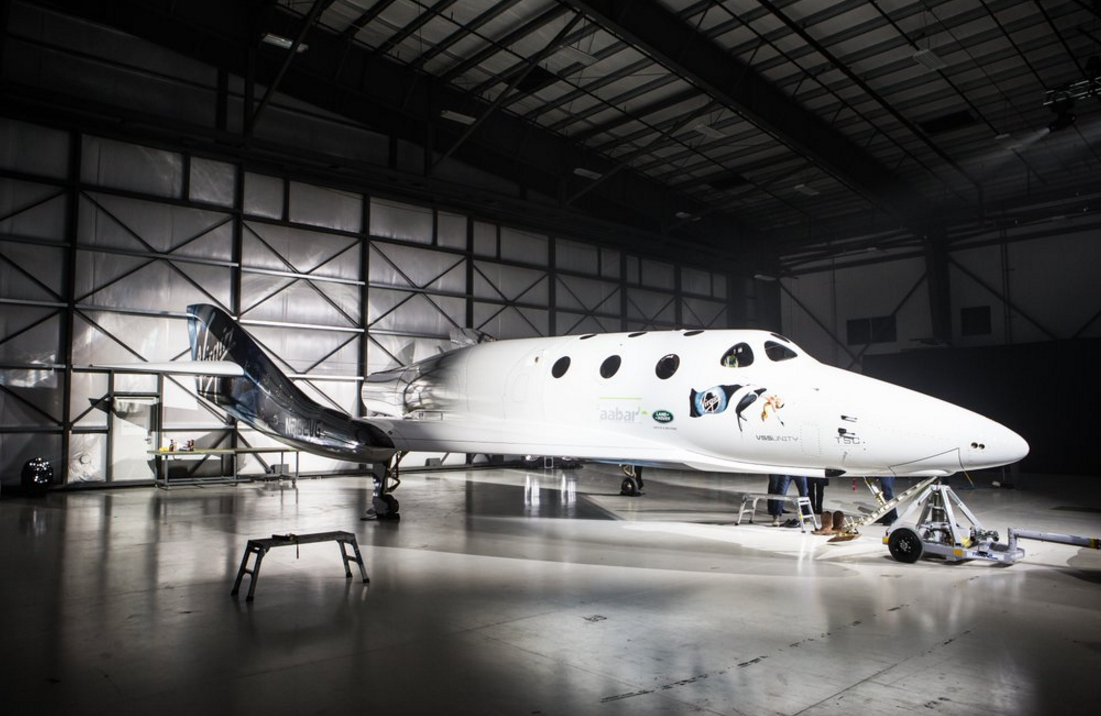 With VSS Unity, Virgin Galactic hopes to become the first private spaceline, sending tourists into space and safely back down to Earth. To accomplish this feat, SpaceShipTwo is carried by Virgin’s twin-fuselage airplane WhiteKnightTwo to an altitude of 45,000 feet. At this point, SpaceShipTwo separates from WhiteKnightTwo and ignites its rocket motor to complete the rest of the voyage.

VSS Unity is equipped to carry 2 pilots and 6 passengers into space in a suborbital trajectory, giving the passengers several minutes of weightlessness. In order to return to Earth, SpaceShipTwo employs a unique “feathering” system. By rotating its wings, the space plane can increase drag it experiences and slow its descent back to the ground.

The design is based on its predecessor SpaceShipOne, the rocket plane that won the $10 million Ansari X Prize back in 2004. The contest challenged the public to build the first privately-funded spacecraft, capable of carrying 3 people, that could complete to flights to space within 2 weeks.

Like SpaceShipTwo, SpaceShipOne was released at a high altitude by a plane, WhiteKnightOne, and completed the rest of the trip into space. Designed and fabricated by Scaled Composites, a company owned by famed aerospace designer Burt Rutan, SpaceShipOne launched a new era of private spaceflight when it won the Ansari X Prize on October 4th, 2004.

Tickets on a SpaceShipTwo flight are set at $250,000 and Virgin Galactic has already sold over 700 tickets, more than the total number of people who have ever traveled into space.

Many of these ticket holders were left with wondering what would become of their purchases when Virgin’s previous version of SpaceShipTwo, called Enterprise, experienced a fatal crash during a test flight in 2014.

The crash, which took place in the Mojave Desert, left the co-pilot dead and the other pilot seriously injured. After a National Safety Transportation Board investigation, it was determined that the crash was caused by a co-pilot error related to SpaceShipTwo’s feathering system. During the test flight the co-pilot rotated SpaceShipTwo’s wings before the appropriate time, causing the space plane to break apart in the sky.

The accident was a devastating setback to the company, but today’s unveiling demonstrates Virgin Galactic’s determination to move forward.

Our team’s job is to plan out not just the obvious tests but also the strange and inventive ones, to conduct those tests, and to use the data from those tests to re-examine everything about our vehicle to ensure we can take the next step forward. – Virgin Galactic