David Perry thinks the secret to agricultural challenges like drought resistance might lie in the bacteria that live in a bunch of grass on the beach.

That’s just one example that Indigo, a company that analyzes the microbiomes of plants to produce seed coatings that impart various attributes, is looking into as a way to combat difficult conditions for various crops. Indigo is launching today after having raised $56 million in financing over the course of its life.

“We’ve always attributed those things to the plants themselves, what we’re increasingly understanding is the characteristic of their plant is something to do with the genome of the plant, and something to do with the genome of the microbes in it,” Perry said. “We’ve taken tens of thousands of plant samples — every continent except Antarctica. Everything from extreme Northern latitudes down to tropic. We take those, isolate the microbes, we grow them and sequence them. We now have over 40,000 microbial sequences of those that live in plants.”

One of the company’s first goals is helping plants use water more efficiently, which is a big issue in drought-stricken areas. That increasingly includes California, but those conditions can be even worse elsewhere around the world, Perry said. “As the climate continues to change, we’re likely to see this problem exacerbated,” he said.

Increasing crop yield is increasingly important as the population continues to grow — in short, we need more food, Perry said. But there’s another potential motivation for these experiments as well: backlash against the use of things like insecticides in plants. Perry said that, if analyzed correctly, there should be a way to produce plants that are insect- and pest-resistant through the use of microbes, which could help assuage consumers to buy produce yielded through Indigo coatings.

The actual process of coating seeds is pretty simple and already exists, meaning the company can use existing technology to produce its seeds. As the seed sprouts, it takes in the microbes around it, incorporating them into an internal environment, Perry said. If it ends up improving crop yield, there are business implications here — not only can Indigo build itself into a real company, farmers too can improve their overall business. That’s the theory, at least.

The whole area of microbiome analysis has become an increasingly interesting space. Many startups are working to analyze human microbiomes, like uBiome, in the hopes of improving health. So it does make sense that the eyes of scientists — and startups — would also shift to the food supply in the hopes of applying similar learnings to improve yield. 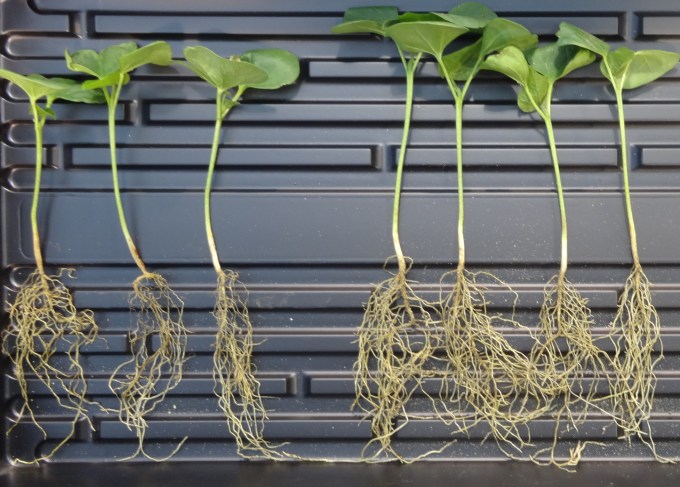 After figuring out what kinds of microbes are present within plants, the company applies an algorithmic approach to determine which ones probably yield traits like drought-resistance. Then, it tests plants with a seed coating based on that microbe profile in a lab, then in a full-on field trial. Indigo has done four seasons of field trials, testing in North America and South America.

Perry and his team have a background in pharmaceuticals and chemical engineering, who figured that they could apply that knowledge to agriculture. The theory, Perry said, was that while modern technology — like herbicides and pesticides — were improving crop yield, they were unintentionally destroying the microbes in the plants. So they decided to see if they could identify those microbes, and then add them back to the plants and see if it would impart traits that would make them more hardy under difficult growing conditions.

To be sure, there is some competition looming. There are larger companies like Monsanto that are spending real money in the area, Perry said. And there are also other startups focused in the area, but the advantage that Indigo has is it starts with the microbiome in the plant, rather than the soil, Perry says. By doing that, Indigo doesn’t have to screen the millions of microbes in the soil that don’t have anything to do with the plant, Perry said. By doing that, the hit rate is higher in determining which microbes produce certain results, he said.

Still, four seasons might not be enough to determine if the process will actually work long term — there can be a lot of variation between growing seasons. Indigo expects to launch its first products this year, though Perry wouldn’t be specific on which kinds of crops the company would focus. The primary goal through its first product will be improving plant yield under water stress for high-production crops.

“The really interesting thing is we have a value proposition for both farmers and consumers,” Perry said. “Right now the tech that is available [like pesticides and insecticides] to farmers to help increase profitability and yield, are things that consumers don’t want in their food. It puts farmers in a weird tension, on one hand they’re trying to make a living, on the other ultimate consumers don’t like their methods.”