A leaked document Facebook sent to some of its biggest advertisers reveals that Facebook will launch ads within Messenger in Q2 2016.

The document, obtained by TechCrunch but kept private to protect its verified source, says businesses will be able to send ads as messages to people who previously initiated a chat thread with that company. To prepare, the document recommends that businesses get consumers to start message threads with them now so they’ll be able to send them ads when the feature launches.

The document also notes that Facebook has quietly launched a URL short link fb.com/msg/ that instantly opens a chat thread with a business. Facebook confirmed the existence of the URL short link. That seems to back up the validity of the leaked document. 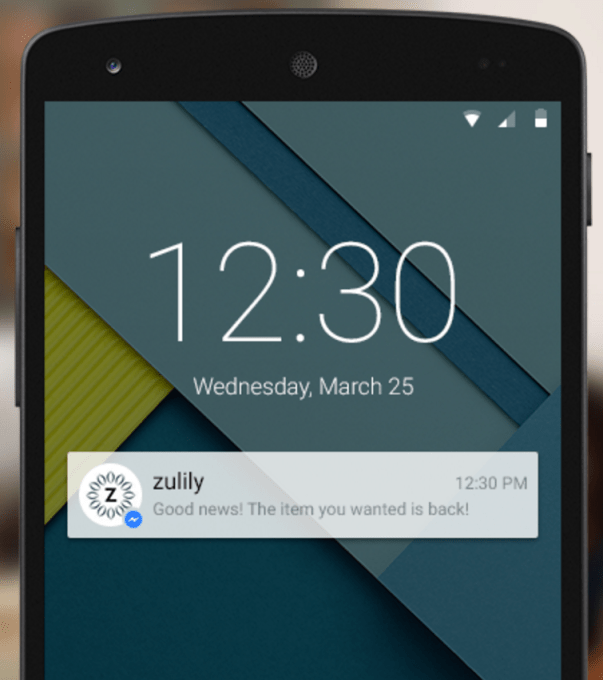 An example of messages between businesses and users

Regarding Messenger ads specifically, Facebook told me “We don’t comment on rumor or speculation. That said, our aim with Messenger is to create a high quality, engaging experience for 800 million people around the world, and that includes ensuring people do not experience unwanted messages of any type.” That last part sounds like Facebook trying to reassure users that even when there are ads, they won’t be completely unsolicited, and it’s going to be very careful.

Messenger is one of Facebook’s most popular and fastest-growing products, with 800 million monthly active users. Yet the social network has never monetized it directly before.

Thankfully for users, Facebook isn’t going to let brands send ad messages to just anyone or even people who’ve liked their Pages. Only those who have voluntarily chatted with a business can be sent ads. This should somewhat limit the spam potential and annoyance. Right now, almost all messages come from one’s friends, so Facebook will likely try to preserve this high signal-to-noise ratio with limits on advertising.

The news somewhat contradicts what Mark Zuckerberg said to calm users of WhatsApp when Facebook acquired it in early 2014. “I don’t personally think ads are the right way to monetize messaging,” Zuckerberg said on an analyst call. WhatsApp’s CEO Jan Koum went further in a 2012 blog post, stating that “Advertising isn’t just the disruption of aesthetics, the insults to your intelligence and the interruption of your train of thought,” but also a waste of engineering resources.

Yet as more content from friends, news publishers, video makers and brands compete for limited space in people’s News Feeds, Facebook has apparently grown willing to let advertisers pay to ping people directly. It’s not the only one opening new direct channels between the two. Twitter today announced new ways for companies to offer customer service through DMs. 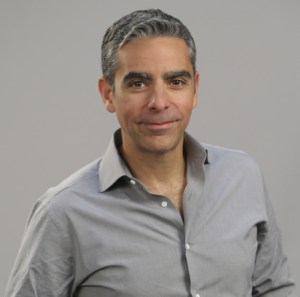 Facebook has been slowly enhancing the ways businesses can privately communicate with people since late 2011. That’s when it first began letting users send messages to Pages, which were only then allowed to message them back. Originally, this was designed to let businesses move messy or irate customer service conversations off their Wall where other fans could see.

Facebook redoubled its business chat efforts when it hired PayPal President David Marcus to run Messenger in 2014. He came with a vision that Facebook could do a better job of letting companies talk with customers than phones and 1-800 numbers with clumsy touch-tone menus and hold times.

At its F8 conference in March 2015, Facebook announced its Businesses On Messenger program that let e-commerce customers get receipts and chat with customer service reps to change orders. It also allowed businesses to integrate with third-party tools like Zendesk and Conversocial to manage their incoming messages. 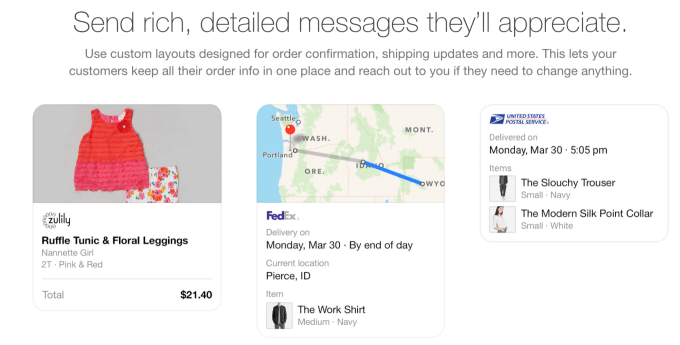 Over the following months, Facebook enhanced chat capabilities for businesses by letting them show a big “Send Message” or “Contact Us” button on their Page, create saved replies, show a badge that grades them on how fast they respond, and reply to wall posts with private messages.

Facebook also recently introduced “Click To Message” News Feed ads that let businesses pay to get people to chat with them. Plus, it’s been secretly testing a chat bot platform that allows developers to create e-commerce experiences and personal assistants within Messenger.

Facebook’s Most Forceful Ad Yet

Now Facebook is pushing brands to use these tools to encourage people to message them so they’ll eventually be able to send ads in return. According to the leaked document, it’s also recently released a new tool: the Messenger URL short link. It’s now live for all Pages, through the format fb.com/msg/ and then the Facebook Username of the Page, like fb.com/msg/techcrunch. 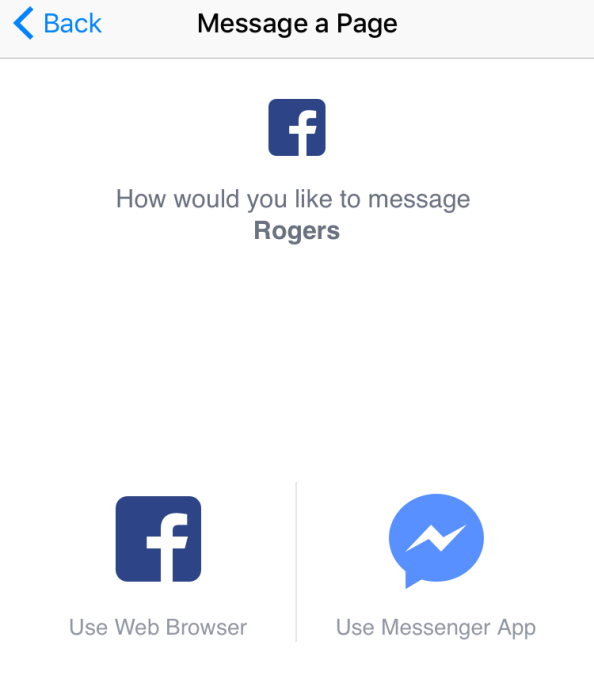 Brands can share and promote their link. When tapped by a user, it will start a conversation with the brand either in the Messenger app, or on Facebook’s mobile web or desktop site. Facebook confirmed to me that a few partners include Canadian telecom Rogers are already trying out the fb.com/msg/Rogers shortcode, but Facebook didn’t talk about it.

This short link is essentially the next-generation version of a 1-800 number. Instead of calling 1-800-FLOWERS, you’d be able to just click something like fb.com/msg/flowers and chat at your own pace with a customer service agent. No “Press 1 to hear a list of options.” No “Please hold.”

If businesses achieve a 90 percent response rate to messages within 24 hours over the past week, their Messenger handle will become searchable on Facebook, the document details. This could further stoke in-bound message threads that will eventually become opportunities to show ads.

It’s unclear exactly what businesses will be able to put in Messenger ads, but there are plenty of possibilities. The document says the ads are supposed to carry on the existing discussion users started. The ads could perhaps: 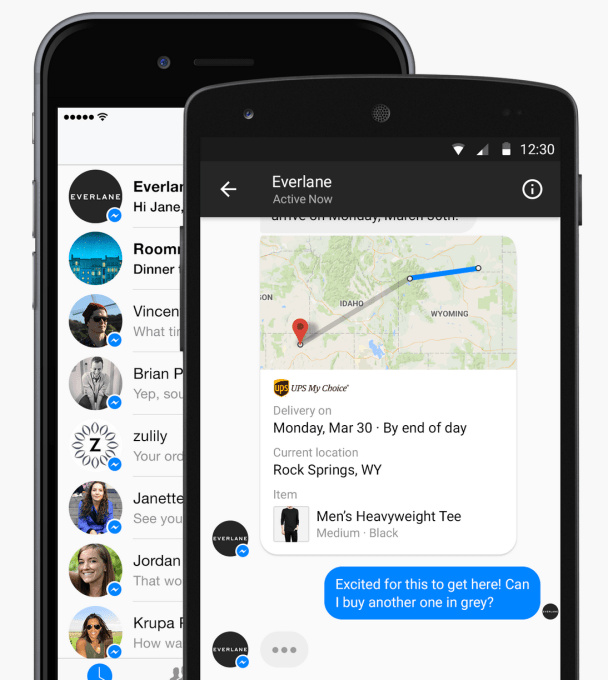 Considering this is the most direct and forceful way for businesses to advertise to or interact with potential customers, Facebook could likely charge steep rates.

There’s always a chance that early tests to Messenger ads receive negative feedback and the plan gets scuttled. The last thing Facebook wants to do is cram spam into Messenger and give people a reason to return to SMS or another chat platform. Expect these ads to be slowly and thoroughly tested before possibly being rolled out.

Right now pretty much every time Messenger buzzes, you know it’s one of your friends and is probably worth looking at. Facebook will have to aggressively thwart spam or misuse of Messenger ads to make money while keeping its chat app at the center of our mobile lives.