PayPal’s mobile app is getting a massive overhaul today, representing the first time in the history that the company has rebuilt its app from scratch. With the redesign, PayPal is focused on offering a more extensible framework under the hood that will allow it to add new features in the months to come, while also offering a simplified experience for users who want easier ways to make peer-to-peer payments, pay in stores, order food, manage their account settings, and more.

The company says that it built the new application with customer feedback in mind, as well, having even spent time with its 8,000 customer service representatives to learn what sort of problems come up most often. For example, while the old version of the application put a heavier focus on using PayPal in stores from the first launch, the new app puts the sending and receiving functions front-and-center.

It makes sense that this feature would be better highlighted in the new application, as PayPal says it has seen over 100 percent growth in this area over the past couple of years. In addition, the company reports that now 1 in 4 of its transactions take place on mobile.

The most noticeable thing about the revamped app is the user experience, in fact. The app features a cleaner, more modern color scheme, iconography, fonts, and layout which makes it better resemble something a startup trying to compete with PayPal would build rather than something from an older and established payments company.

In a blue section on the homescreen, users can quickly view their account balance, then jump into their account or view their recent activity with just a tap. In the Activity Hub, you can track all the money you’ve sent out or received, including funding sources when applicable – another feature users had been demanding.

Buttons to actually send or receive money are in green below, then the bottom section focuses on PayPal’s other initiatives including the ability to order food through its app, use PayPal in stores, or access your store loyalty cards.

Other changes to the app are less obvious, but equally important. For example, there’s a heavy emphasis on making the app accessible to a global audience. Specifically, the company’s new, iterative platform allows it to better customize and localize the PayPal app in the 145 markets where it’s now live. 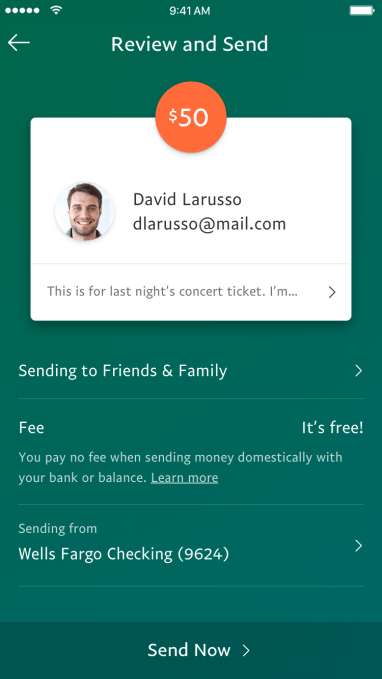 At launch, says Jo Lambert, VP of Global Consumer Product and Engineering at PayPal, the app is localized in 26 markets and supports 17 different languages.

Other new features live now include expanded support for Android fingerprint authentication, separation of account activity by pending and completed transactions, the ability to add credit cards issued from other countries, and support for viewing your PayPal Credit balance from the homescreen.

The new platform also allows PayPal to iterate on different feature sets to meet its various markets’ needs, as well as make it easier and faster to push those features live when it comes time to launch.

That will help the company roll out improvements to PayPal on mobile at a quicker pace, to make it more competitive with any current or future challengers.

Already the company has some changes in the works – like the introduction of tap-and-pay (NFC) support on Android which will be announced at Mobile World Congress in Barcelona, for example. As new features are added, the new platform will allow PayPal to expand its navigation to support the additions, Lambert also notes.

Another idea on PayPal’s horizon is a plan to expand its focus on money management as a whole. Already, many users keep a balance in PayPal, and the company wants to help them do things like budget, set goals, and keep tabs on their overall financial health.

“We do see a place where PayPal will be a more meaningful player in a customer’s everyday financial life,” says Lambert. “We’re looking at the transformation of PayPal as moving from a transactional brand to being a brand that stands behind people to help them manage and move their money more effectively.”

The new PayPal application will be live on iOS and Android.