With Twitter-owned Periscope, Facebook’s latest video efforts, and, of course, Meerkat, is there any space left for a new social video streaming app?

London-based TiZR clearly believes the answer is yes, and, evidently, so do investors. The burgeoning startup, whose app recently debuted on iOS, has raised $500,000 in backing in a round led by EDM record label Spinnin’ Records. 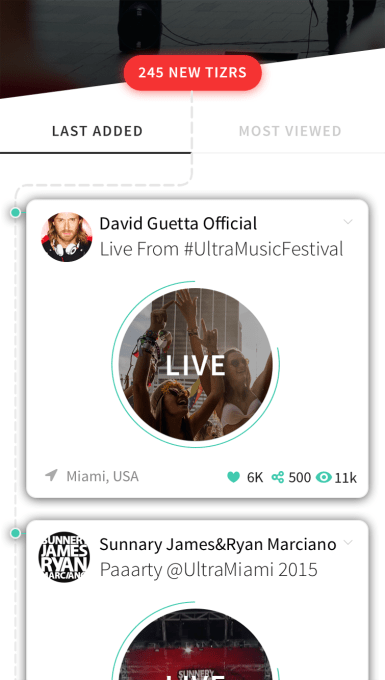 Perhaps, even more curiously, I’m told the investment equated to a pre-money valuation for TiZR of around $11 million. Let’s party like it’s 1999!

Describing itself as a “social streaming network”, the TiZR iPhone app lets you live video stream, either publicly or to a private audience of friends and family.

Noteworthy is that streams are more or less ephemeral, with video recording staying accessible for only 20 minutes after broadcast, with one exception: for every ‘like’, the archive’s life is extended by a further 10 seconds, which all seems a bit gimmicky but may help gamify engagement a little.

“TiZR creates a new space, closer to actual social interactions and where exclusive content can be shared on a live basis,” Jean-Michel Reynoird, co-founder and CEO of TiZR, tells TechCrunch. “While Meerkat and Periscope allow users to see the world through the eyes of others, these platforms focus more heavily on professional and informational content. We are a place to share private life moments.”

As for garnering investment from an electronic dance music label, Reynoird says that Spinnin’ Records has been helping the startup spread the word about TiZR in the EDM industry, and that the app has become popular among notable DJs around the world. “They find in TiZR a new space to share their culture: good times, parties, and music,” he says.

I’m also told that the Spinnin’ team was attracted to the app’s “TiZR Channels,” which are professional accounts that you are able to subscribe to. “These channels, which can be merged with Facebook and Twitter, provide artists with a cool way to bond with fans on a more personal level,” adds Reynoird.

Monetization seems a way off yet. Reynoird doesn’t want to go down the road of selling advertising or users’ content/data — “we wanted to get a break from the forced permanence of all existing social networks, where everything you do or share is stored and sold to the highest bidder,” he says — but concedes that video has inherent bandwidth and storage costs and that the company will need to find a way “to bring content to our users at a fair cost”.