Lulu, the once controversial mobile app that lets women anonymously review and rate men (something the startup calls ‘dating intelligence’), has been acquired by London-based dating platform Badoo.

The move also sees Lulu founder and CEO Alexandra Chong move back to the U.K. capital from New York to join Badoo as President, where I’m told she’ll be focusing on international expansion, business development and communications.

Terms of the deal remain undisclosed, though I understand the acquisition was a mixture of cash and stock. Lulu’s early backers were Passion Capital, PROfounders and a number of prominent angels including Yuri Milner and Dave Morin.

In a later undisclosed Series A round, Venrock also came on board as an investor after Lulu relocated to New York and began exclusively targeting the U.S. market and college campuses in particular. In total the 2011-founded startup had raised $15 million. 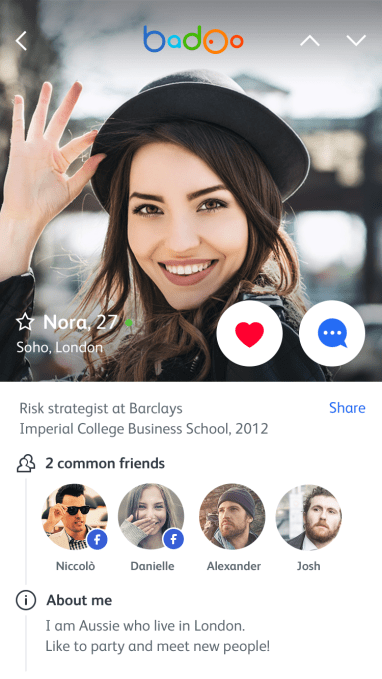 With that said, whether or not this is anything close to a home run for investors is impossible to know, but it’s notable that Chong is not only staying on but is getting such as prominent position within Badoo. And while I wouldn’t go as far as to call the deal an outright acqui-hire, along with Chong’s new position, a number of other details suggest that this was a major consideration behind Badoo’s decision to acquire Lulu.

Tied to this is the fact that, for the time being at least, the Lulu app as we know it is to be no more. Instead, a new, more conventional dating app is to replace it, sans any of the ‘dating intelligence’ features that made Lulu a trailblazer in the first place. Badoo has form in essentially white-labeling its tech to power brands other than the main Badoo app, including Hot or Not, Blendr, and now Lulu.

“The new Lulu will be powered by Badoo technology and offer the complete Badoo dating experience, allowing Lulu’s 6 million users to interact and connect with Badoo’s 300 million members’ community, via Badoo’s Search and Swipe, chat, and photo-sharing functionalities,” a spokesperson for Badoo tells TechCrunch.

Meanwhile, in a call, Lulu founder Alexandra Chong (and now President at Badoo) told me that prior to the acquisition, Lulu didn’t offer any dating features as such — i.e. no way for women to actually find dates through the app — but was instead used by women to share experiences of dating via other apps, including Badoo. However, that missing dating functionality was actually something Lulu users had requested, she says.

What is also clear is that the acquisition sees a much bigger company swallowing up a smaller one. Chong points out that Badoo is the definitive leader in Europe by some stretch and has a lot more potential to grow, including in Asia-Pacific. Of its 300 million-strong community, the dating app is seeing 60 million active users in over 190 countries, with 400,000 new people signing up for a “Badoo experience” each day, apparently. In contrast, Lulu’s 6 million number is actually downloads/registered users, not necessarily actives.

Chong also tells me she’s excited to be back in London, although she’ll still be splitting her time with New York, and to return to the place that showed so much support to her and Lulu in its early days. “It just makes sense to be here,” she says. “I’m a huge fan of the ecosystem, having raised my first round of capital from funds here and revived support from the government. I think there’s huge opportunity in London!”.