There’s promising news for individuals and organizations that deal in confidential data. Keybase, the service for sending encrypted messages, has begun to offer a file-sharing feature that is powered by end-to-end encryption, making it considerably more secure than Dropbox or other mainstream file-sharing options.

The feature has initially rolled out to a selection of Keybase users, who have the option to create public folders of files or those that are private only accessible to others who they invite. All files appear as plaintext, aside from images, as demonstrated in this sample page.

Because the folders are end-to-end encrypted, their contents is not readable via Keybase’s server. (Dropbox and others have been accused of posing security risks in this area.) Instead, private folders are streamed on demand to users who have been granted access to them. 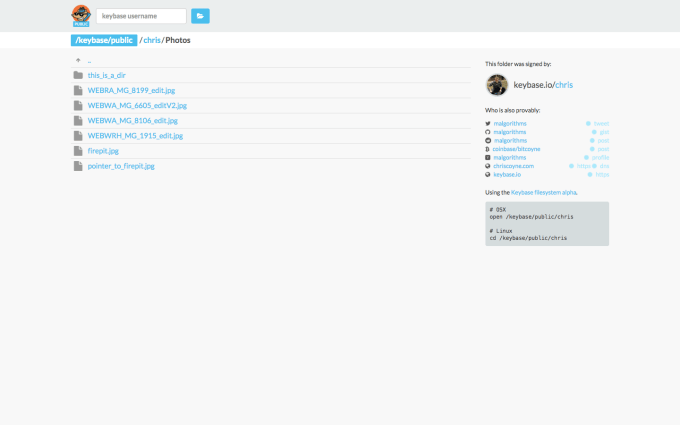 Perhaps most interestingly, the team is preparing to add a feature that would enable Keybase users to securely share files with others who do not (yet) use the service.

“You’ll be able to throw data into “/keybase/private/jonrussell,pal@twitter”, even if that Twitter user hasn’t joined Keybase yet. Your app will encrypt just for you and then awake and rekey in the background when that Twitter user joins and announces a key,” the company explained on its blog.

Initially, all early users have been given 10GB of storage to get started. There’s no plan to expand that but Keybase said it will probably introduce paid plans to increase that allocation for those who want it.

That said, the company — which raised a $10.8 million Series A round last year — admits that it doesn’t have a monetization model in place just yet. Things may still be up in the air on that front, but Keybase has pledged to remain ad-free and free for regular users, while it said it will never sell its users’ data.

“We’re not trying to make money,” the company further explained. “We’re testing a product right now, and we’d like to bring public keys to the masses.”

This is a fascinating new service — bonus information nugget: keys are hashed into the blockchain for security — which could have real value for anyone wanting to transfer information confidentially online. Be that whistleblowers, media informants, or individuals or organizations in possession of highly sensitive data.

You can check out the Keybase blog post for more technical details and information about how to get on to the beta. Be warned though, you may need to wait on an invite — that’s assuming that you’ve managed to get an invite to the main Keybase service already.