Messaging app Line‘s ongoing efforts to be more than just a messaging app took an interesting turn in Indonesia, the world’s fifth largest country with over 250 million people, after it teamed up with popular motorbike taxi on-demand service Go-Jek. Now users in the country can summon a Go-Jek driver from inside the Line app.

Integrating on-demand services into messaging isn’t anything new — WeChat is a long time Didi Kuaidi partner, Uber was recently added to Messenger in the U.S., while Line even has its own cab service in its native Japan — but this is notable because it represents Line’s deepest integration with a third-party to date. Once a bike is summoned, Line users can watch the progress of their driver as they travel to pick them up and get in touch with them, too. 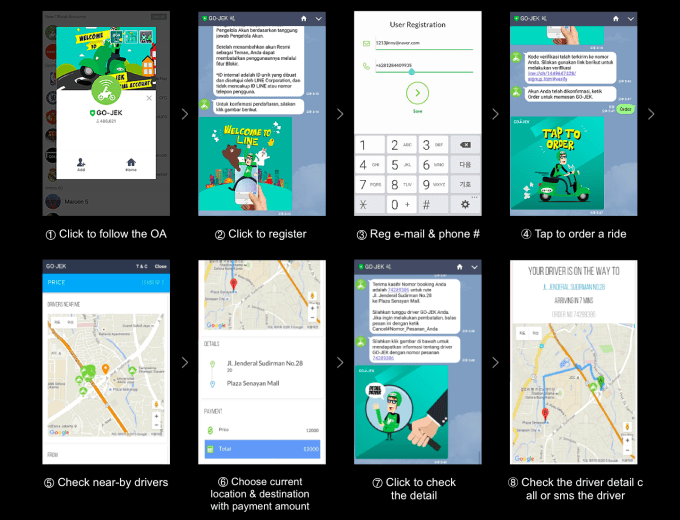 Go-Jek, for those who don’t know, is backed by Sequoia and is Indonesia’s leading bike on-demand service. That’s a bigger deal than it might sound. Bike taxis are a common transport option in many parts of Southeast Asia, particularly congested mega cities like Jakarta, because they are the most efficient way to get from A to B and avoid hours in traffic jams.

With over 200,000 drivers on its platform in Indonesia, Go-Jek is arguably bigger than either Uber or GrabTaxi — making it an opportune partner for Line, which is placing heavy focus on Indonesia.

Line’s annual revenue surpassed $1 billion for the first time in 2015, but its user growth is slowing and it is unclear whether it is profitable. In response to those challenges, the company last year re-focused its efforts on ‘winnable’ markets in Asia and better monetizing its existing userbase — which currently sits at 215 million.

Indonesia has been deemed a winnable market, and it is already one of Line’s top four countries. BlackBerry’s BBM service was long the dominant chat app there but, with the Canadian company’s consumer appeal and sales declining steeply in recent years, there’s an opportunity to takeover the chat space.

Kakao bought Path, which is popular in Indonesia, and is redeveloping it for that very reason, and WeChat is running local initiatives to drum up interest. Line’s approach is to work with local services in order to broaden its appeal beyond messaging. But, with Go-Jek already a household name and downloaded on millions of phones, the integration will need to be slick for Line to capitalize on this partnership.

Elsewhere, in Thailand — another focus market for Line — the company is developing a digital concierge service as part of its effort to be more than just a chat app. With its first non-Japan R&D based in Bangkok and a focus on growing its userbase in Southeast Asia, these new services and partnerships are likely to the first of many from Line in 2016.