Earlier this week, Samsung rolled out support for ad blocking in the new version of its web browser for mobile devices, the Samsung Internet Browser. Third-party developers quickly responded by launching ad-blocking mobile apps that work with the browser. Now those developers are finding their apps are being pulled from the Google Play, and their updates are being declined. The reason? It seems Google doesn’t want ad blockers to be distributed as standalone applications on its Google Play store.

In case you missed it: a few days ago, Samsung introduced ad blocking within its mobile web browser. The feature works a lot like Apple’s support for ad blocking in Safari, which arrived with the release of iOS 9. Specifically, Samsung launched a new Content Blocker extension API which allows third-party developers to build mobile apps that, once installed, will allow those surfing the mobile web via Samsung’s browser to block ads and other content that can slow down web pages, like trackers.

Apparently, Google – which just so happens to be in the ad business itself – is not a fan of this new functionality.

One of the first third-party ad blockers to launch following Samsung’s announcement was Adblock Fast. The app quickly become the top free app on Google Play in the “Productivity” category, but has since been banned from Google Play.

According to Rockship Apps founder and CEO Brian Kennish, maker of Adblock Fast, Google’s app reviews team informed him the app was being removed for violating “Section 4.4” of the Android Developer Distribution Agreement.

This is the section that informs developers they can’t release apps that interfere with “the devices, servers, networks, or other properties or services of any third-party including, but not limited to, Android users, Google or any mobile network operator.”

If that text sounds a little broad-reaching and vague, that’s because it is. It’s also what allows Google to react to changes in the industry, like this one, on the fly. 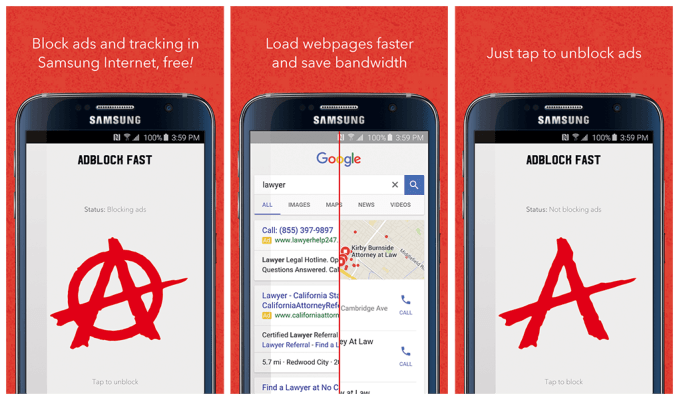 Kennish says that Google’s app reviews team informed him that he could resubmit after modifying his app so it didn’t “interfere with another app, service or product in an unauthorized manner.”

“We’ve been trying to contact Google through their public channels since Monday, and I tried through private ones all day yesterday…but we haven’t gotten any official response from a human – just autoresponders,” notes Kennish.

He suspects that Adblock Fast was the first to be pulled from Google’s app store because it had climbed the charts so quickly and had achieved a 4.25 rating. Kennish says that the app had around 50,000 installs at the time of its removal.

In addition, the company could have gotten on Google’s radar by pushing out an update that offered a better user experience. (Some people didn’t realize it only worked on Samsung’s 4.0 browser and left 1-star reviews. The update was meant to better highlight the app’s requirements.) 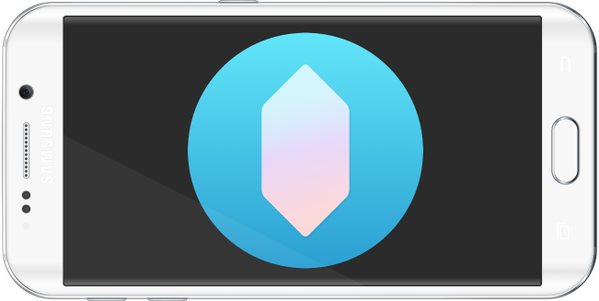 Meanwhile, as of the time of writing, other ad blockers are still live, including Crystal and Adblock Plus (Samsung Browser). However, that may not be the case for long.

Crystal’s developer Dean Murphy also just submitted an update that’s just been declined by Google’s app review team for the same reason cited above. Again, Google references section 4.4 of the Developer Agreement as the reason for stopping the update from going live.

“I have appealed the update rejection, as I assume that I am rejected for ‘interfering’ with Samsung Internet Browser, citing the developer documentation that Samsung have for the content blocking feature,” explains Murphy. “I’m still awaiting their reply.”

Adblock Plus tells us that its new app, an extension for Samsung’s browser, is still live, and they have not yet heard from Google about its removal. However, they have also not tried to update the app yet, according to co-founder and CEO Till Faida.

From our understanding of the situation, Google will continue to support mobile browsers that can block ads within themselves, either via built-in functionality (as with the Adblock Plus browser), or via extensions (as with Firefox, Javelin, Dolphin browsers, etc,) but only when those extensions are not distributed via APKs (downloadable apps) on Google Play.

Or to put it more simply: browser apps that block ads are okay; ad blocking apps are not.

It’s not clear at this time why Crystal and Adblock Plus (Samsung Browser) have not also been pulled from Google Play. But killing a developer’s ability to update their app has a similar effect as a full removal, in terms of both sending a message to the individual app developer, as well as the wider developer community.

Reached for comment, a spokesperson for Google only offered the following statement:

“While we don’t comment on specific apps, we can confirm that our policies are designed to provide a great experience for users and developers.”

Given the situation at hand, it seems that Samsung will need to re-evaluate how its ad-blocking feature is being implemented. Either it will need to build in support for non-APK extensions, or it will need to figure out another way for developers to distribute their APK files outside of Google Play, such as in a self-hosted app store.