With Azure Stack, Microsoft wants to bring its Azure cloud computing services into its customers’ data centers. Today, the company announced that it will launch the first technical preview of Azure Stack later this week on Friday, January 29.

For now, this is a pretty limited version of Microsoft’s overall vision for Azure Stack. It’ll only support a single machine, for example, which is obviously a far cry from the enterprise-scale data center environment Microsoft envisions for the platform. As Microsoft’s Ryan O’Hara told me, though, the plan is to get a full release of Azure Stack into customers’ hands “in the Q4 timeframe.”

In many ways, Azure Stack is the logical next step in Microsoft’s overall hybrid cloud strategy. If you’re expecting to regularly move some workloads between your own data center and Azure (or maybe add some capacity in the cloud as needed), having a single platform and only one set of APIs across your own data center and the cloud to work with greatly simplifies the process. This, O’Hara believes, means Microsoft will be “well-positioned against Google and AWS” because it can more easily connect its data centers to its customers’ data centers than its competitors. 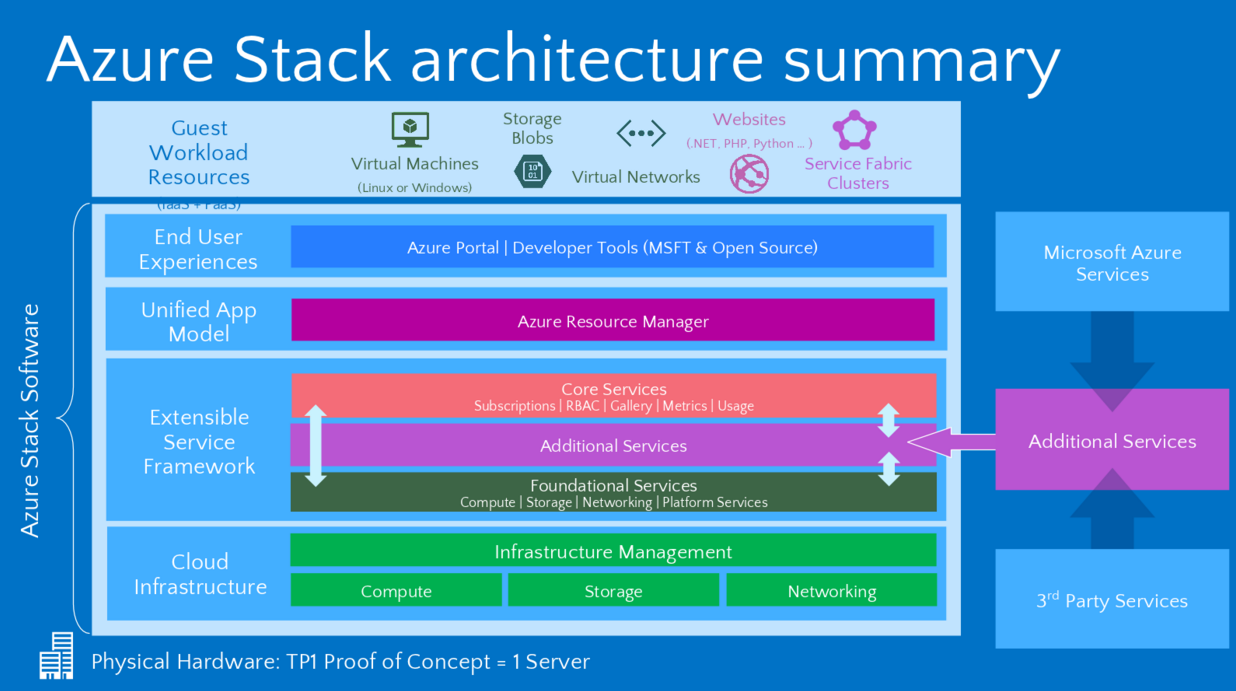 Both Azure and Azure Stack share a lot of their underlying technologies and Microsoft has standardized on a single architecture for both. O’Hara stressed that Microsoft wants to enable what he called “one Azure ecosystem” that spans from the cloud to the enterprise data center.

This means developers and IT admins will be able to use one set of tools to target the platform (including Visual Studio and PowerShell) and won’t have to worry about whether their apps will eventually run on premises or in the public Azure cloud. Azure Stack uses the same user interface as Azure, too. “As far as tenants go, it really should appear as if it’s another region of Azure for them,” he said.

Over the course of the technical preview, Microsoft will continue to add new services and content, including OS images and Azure Resource Manager templates.

Azure Stack is obviously going up against the likes of OpenStack, the open source enterprise cloud computing platform that now has the backing of everybody from Rackspace, HP Enterprise and IBM, as well as a thriving startup ecosystem. Microsoft clearly hopes that its hybrid story will allow it to position Azure Stack as a viable alternative against this quickly growing open source competitor.