It was just about a year ago that Box finally pulled the trigger and IPOed. It was a good day by all accounts, with an IPO price of $14 that promptly went up to $23 a share. Today that price sits below $10 a share, well below that $14 launch price and light years from that heady first day close.

All that said, Box CEO Aaron Levie reports he has no regrets about going public and insists he isn’t worried about the short-term stock price, pointing out that the entire tech stock market that has gone public over the last twelve to eighteen months is going through the same thing. For a variety of reasons, the market is retreating to more conservative investments right now.

Lest you think he’s concerned about a possible take-over bid as was suggested in a recent Wall Street Journal article, a core group including Levie, his co-founder and CFO Dylan Smith, members of the board and some early employees own special dual-class shares that should protect it from any of that. If a good bid came along they would have to take a look at it, but overall he says he and his partners are taking a long-term view.

In spite of the stock price’s wild ride to this point, Levie says he’s happy to have gone through the IPO experience. In particular, he says it’s been good for business as enterprise customers like the stability and financial transparency of a public company. All the cards are on the table.

While he says it takes work to educate the markets about his business, he trusts that the stock price will eventually come around if he builds a solid company. “Even if your company’s story is well understood, you will still deal with market volatility,” he told TechCrunch.

The Long Road To IPO

For a long time, Box was a Silicon Valley startup poster child for that kind of company that was disrupting traditional enterprise software — in this case content management, offering a much easier-to-use and manage cloud service.

For years, content management had been the realm of large software vendors sold by companies like EMC, IBM, Oracle and OpenText. These companies produced software for IT at a time when that was in demand. The end user didn’t matter all that much to them, but when an alternative came along that put the end user first, those users took notice and Box thrived.

Even if your company’s story is well understood, you will still deal with market volatility. Box CEO, Aaron Levie

Over time it began to layer on features that appealed to administrators too, and high-profile enterprise customers like Toyota, Southwest Airlines, Procter & Gamble and GE came on board.

Box filed an S-1 indicating it was ready to IPO in March, 2014, then the markets went sour. People looked a little closer at the numbers on that S-1. Box went into quiet mode and hunkered down for 9 long months before finally going forward with the IPO in January of last year.

After that initial first-day high, the stock began its steady descent until today when it’s sitting at $9.73 as I write this piece.

What has caused this drop for Box in particular? There was a lot of talk of ugly metrics when Box filed its S-1initially. It had high sales and marketing spend, especially as percentage of revenue. It caused Box to go from can’t-miss startup darling to cloud pretender in just a few months and Box suddenly was on the defensive, forced to explain itself and its strategy.

As Box COO Dan Levin told me at Web Summit in October, 2014, there was a reason for those numbers, but he didn’t expect that kind of spending to last forever:

“We had access to large amounts of inexpensive capital and our market is arbitrarily large and when you have those conditions, money and a big market, the rational behavior is to ramp up as fast as you can. We won’t do it forever. We don’t have to do it forever,” Levin said.

To be fair, even while the stock price has inexplicably plunged, the numbers have actually improved post-IPO. Box’s revenue was up 38 percent in its most recent earnings report in December. Sales and marketing spending has started to drop. The gap is still wide, but the trend is right. 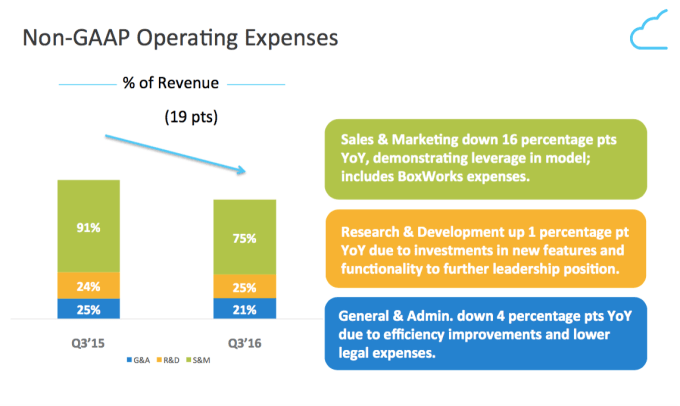 The company also reported a 37 percent year over year increase in billings to $89.4 million. They are seeing just 4 percent churn and retention was 119 percent (which included expansion of existing customers).

As TechCrunch’s Alex Wilhelm wrote at the time of the last earnings report, it seems to be going in the right direction: “Still, as per the last few quarters, Box is doing precisely what it said it would do. Hard to get mad about that.”

Yet mad Wall Street seemed to have gotten. Since January 4th when Box’s stock price sat at $14.34 a share (a bit over its IPO price), the company has seen it plunge down below $10. There doesn’t seem to be a fundamental reason for it other than Wall Street has lost patience with tech stocks, particularly growth-oriented stocks, and Box is getting swept up in the tide of discontent.

Still, Levie says becoming a public company was the best move he could have made, pointing out it would be much harder to go public today and more difficult to raise cash in the tightening private market.

In spite of that market volatility, Levie says the company has projected going cash-flow positive by next January and with $240 million in cash in the bank as of its last statement, it appears to have more than enough money to ride this out.