Uber may have pulled its project to work with auto-rickshaws in India, but that isn’t stopping startup Jugnoo from zooming ahead with its plans to turn the iconic and budget transportation service into an on-demand one.

Chandigarh-based Jugnoo confirmed this week that it closed a Series B round at $5.5 million, after adding $2.5 million to the initial $3 million that it secured back in November 2015. The additional top-up was provided by existing investor Paytm, the Alibaba-backed billion-dollar mobile payments firm, with participation from Snow Leopard, another existing backer. The company raised a $5 million Series A round last summer.

Jugnoo was launched in November 2014 with the basic premise of making India’s ubiquitous auto-rickshaw drivers more efficient, and plugging consumer transportation demands at the same time. The service is currently operational across 22 cities, where it claims two million users, around 6,000 drivers and 30,000 completed rides per day.

In an interview with TechCrunch, co-founder and CEO Samar Singla said that he took inspiration from the fact that auto-rickshaw drivers are just 30 percent utilized, even though they are responsible for a whopping 30 million rides per day across India.

“We want to drive utilization up to 60 percent for drivers,” he explained,” then the loyalty forms.”

Pointing out that the service isn’t handing out deep discounts to consumers and overly generous subsidies to drivers — as Uber and local Indian rival Ola are — Singla said he believed that by aiding a driver in their daily work — complementing their existing street rides by providing on-demand customers, particularly during off-peak hours — the service will take “a little more time” to scale, but it will do so based on answering needs not the color of money. While Uber did, and Ola still does, offer rickshaws, he argued that their method of subsidizing drivers doesn’t necessary provide them with the rides that supplement their existing workload, particularly during quiet times of the day. 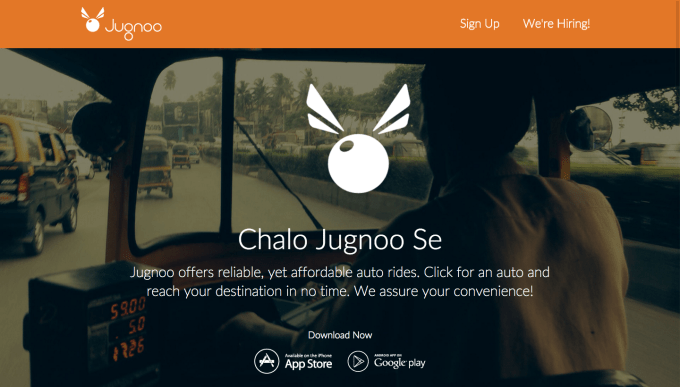 While he believes that Ola isn’t overly focused on auto-rickshaws because it cannibalizes its more expensive taxi rides business, the Jugnoo chief does foresee a time when both Ola and Uber will look harder at the auto-rickshaw space.

“Before that competitive landscape mushrooms, we need to make sure we are already big enough to fight a battle,” he said. “Hopefully they won’t touch [the auto-rickshaw business] because it is so low margin, but [in terms of rides per day] it is thirty times bigger than cabs so it is unlikely that they’ll ignore it.”

“Uber and Ola are for the top 20 percent of people, we’re for the bottom 80 percent,” Singla added.

Top priority for this year is to expand Jugnoo’s presence into an additional 25 cities in India, most of which will be second-tier. Like Uber and Ola, the company keeps its operations lean — using launch teams and two-to-three person offices once a city is established — but 100 new employees are likely to come aboard to help with the expansion, further develop the tech, and generally support the scaling of the business.

Transportation on-demand services are often talked about for the potential to be ‘anything on-demand’ companies. Indeed, Uber just expanded its standalone food app in the U.S. and Ola has long run a similar service in India. Jugnoo did utilize its network for delivery services, but it opted to shut that down last year after finding that demand far outweighed supply.

“We have to reach decent supply [first,]” Singla said candidly. “When we reach one million rides per day then we’ll bring back delivery. We’ll probably diversify [further] but the market is so huge and we’re so tiny. Maybe [it will happen] one year down the line.”