Numerous startups over the years have tried to tackle the problem of helping people track down the photos others have taken, but hadn’t yet shared with you. Today, the outsize winner in the space is Facebook, whose Moments application has taken over the social network’s photo syncing function, while leveraging Facebook’s massive scale to allow for easier private photo-sharing.

But a new Austin-based startup called Waldo Photos, from HomeAdvisor’s co-founders, has a different angle on this issue. Instead of trying to deliver friends’ photos to your smartphone, it’s focused on working with professional photographers, including those at events like concerts and games, who can then zap photos of you to your phone automatically.

The idea itself is interesting. After all, there’s already an established market where consumers are willing to pay for high-quality photos – like those taken at amusement parks or tourist destinations, or those taken while they participated in an event, like a race or competition; as well as those snapped by a roaming photographer at an outdoor festival or concert, and elsewhere.

The problem is that there’s still a lot of friction involved in claiming those photos. The photographers either have hurry to go make prints and then string them up for later viewing, or the photos have to be printed-on-demand at kiosks.

Waldo, however, uses a combination of facial, object and pattern recognition, in order to match a photo taken at an event with a given individual and then sends that photo directly to the individual’s phone.

The company has now raised $5 million in seed funding from Upfront Ventures, who led with $4 million in the new round. 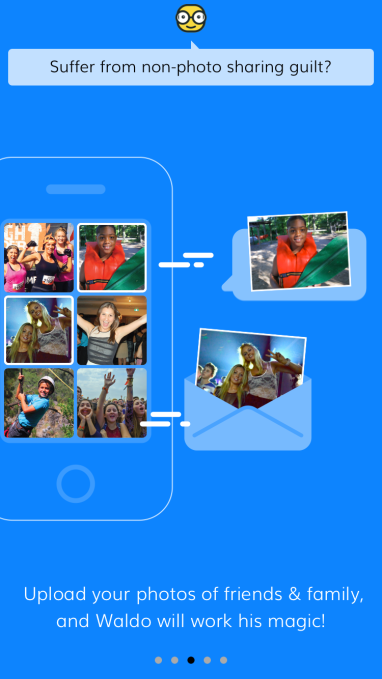 Waldo co-founders Rodney Rice and Michael Beaudoin have worked together for more than two decades, including during the early days of Einstein Bros. Bagels, where they were on the founding management team, and later as co-founders of HomeAdvisor. They took that company (formerly ServiceMagic) from concept to $250 million in annual revenue before its acquisition by InterActive Corp.

“I’ve experienced the pain myself, as the father of three kids,” explains Rice, as to why he wanted to work on photo-sharing. His family would go to various events where professional photos were taken, he says, “but it’s very difficult to get your hands on those photos.”

Waldo’s solution is to work both with larger events as well as make its platform available to entrepreneurial-minded pro photographers. In the former situation, consumers may be able to get their photos sent to their phone for free, as they would be ad-supported by way of a brand’s watermark on the image.

In other cases, Waldo would work as a traditional marketplace – participating in a rev-share with those selling photos through its service.

Notes Upfront partner Kara Nortman, it’s the team’s approach to building out marketplaces that prompted their $4 million bet on Waldo. “They’re really focused on partnering with the supply side – venues, events, races, etc. – and creating a platform for photographers themselves,” she says. “That focus on supply side has not been done particularly well.”

To get started with Waldo, consumers at events will be prompted to text a selfie to the shortcode “SELFIE” along with the event’s hashtag. A photographer then takes photos at the event using their DSLR camera, and these are automatically uploaded to Waldo’s cloud by way of a Wi-Fi-enabled SD card.

Afterward, when Waldo finds the first photo that matches an individual’s uploaded selfie, that photo is sent as a thumbnail to the consumer’s phone. To view any additional images, the recipient will be asked to download Waldo app, where they’ll also be able to buy photos, share them, and view those they’ve already purchased, organized into albums.

The app is not yet available to the public, but will be live in a few months’ time on both iOS and Android.

Beyond facilitating an easier way to get the higher quality photos from events, Rice believes Waldo will eventually allow people to stop pulling out their phones so often.

“I have 6,500 photos on my phone, but most of them are terrible,” he says. “We run around photographing our moments instead of living our moments.” He hopes that Waldo will encourage people to put their phones down, and just watch the concert or game instead of feeling the need to record it. That’s not as likely, given today’s consumers’ smartphone addictions, but it’s at least a noble vision.