General Motors has taken the wraps off its latest move to put itself into the next generation of transportation. Today the company launched Maven, a new program that brings together the company’s various efforts in car-sharing services, along with a team of 40 from within the car technology industry and people brought in from Google, Zipcar and Sidecar to develop more sharing services to add to the mix.

The name and concept of Maven, you may recall, first surfaced a couple of days ago when news broke that GM was acquiring select assets and employees from Uber competitor Sidecar.

“We are seeing significant changes in consumer behavior as people want to take advantage of new situations like ridesharing and car-sharing,” GM president Dan Ammann said in a briefing Wednesday with journalists. “We see significant opportunities as those changes are coming and want to make sure we are at the forefront of it.”

Maven will include a car-sharing trial in Ann Arbor, Mich.; a service first started in New York and now expanding to Chicago to provide a fleet of usable cars in residential blocks; a peer-to-peer service in Germany where people share their cars; and a GM campus program in the U.S., Europe and China to test more new ideas.

Rates for getting cars through these programs will cost as low as $6/hour, Ammann said.

There will also be some interesting tech touches in the mix. In Ann Arbor, GM will be relying on connected car systems so that your music and other preferences can follow you wherever you go, even if the cars are being shared, with support for GM’s own OnStar navigation, calling and security service, Apple’s CarPlay, Android Auto and more.

“We believe it’s important in the car sharing experience for the passenger and customer to feel like it’s your own vehicle,” said Julia Steyn, GM VP, Urban Mobility Programs.

She also noted that in the Ann Arbor car-sharing pilot, GM will use WhatsApp to as a customer service tool to get feedback and field questions from customers. Facebook has confirmed that this is not a pilot of WhatsApp’s new enterprise service, also announced this week.

Ammann and Steyn would not comment on how much money GM plans to invest in Maven, but said that this was not just a moonshot.

“This is more of an opportunity than a threat,” Ammann said of the disruption in the automotive space. “We see [Maven] as a commercial opportunity.” 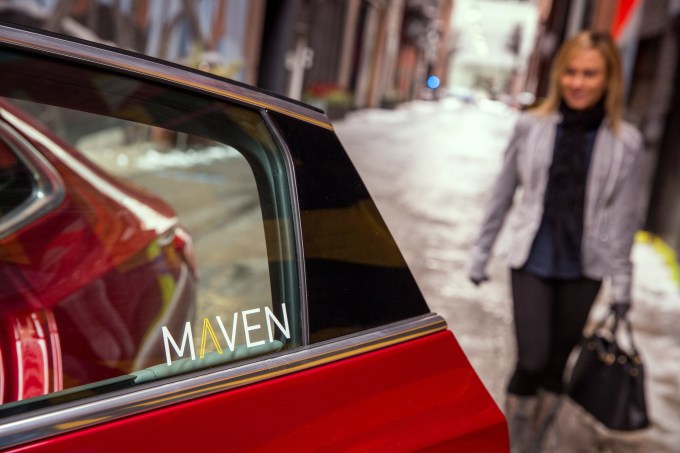 The automotive and transportation industries are indeed in a big period of flux right now.

On the car front, we’re seeing a shift from traditional petrol-based cars to those powered by alternative energy sources like electricity, and cars that are significantly more connected, even to the point of being able to drive themselves.

The way we’re using cars is changing, too, with companies like Uber raising the bar on how much of our car needs can be met by others doing the driving for us; and others like Zipcar raising the question of whether those of us who want to keep driving actually need to own the car at all.

These all potentially spell doom for carmakers, but opportunity, too.

GM has been making a lot of moves to bring itself up to speed on all of these fronts. The company this month unveiled a new all-electric car, the Chevy Bolt. And it put $500 million into Lyft, the ridesharing company that competes with Uber. The two plan to work on autonomous car services as part of the investment.

The Lyft deal will not conflict or compete with Maven, Ammann said, as he made a point of differentiating what GM is doing with Maven from those other two efforts.

“When we talk about ridesharing we are talking about the business Lyft is in where you are being driven. Car sharing is when you are driving a vehicle on a short-term basis,” he said. “Maven is car sharing, and is distinct from the ridesharing business.”

Here is a breakdown of the services announced so far under Maven:

City: A car-sharing program covering over 100,000 people in Ann Arbor, initially based around the University of Michigan. GM vehicles will be available initially at 21 parking spots across the city, the company says. It will be expanding this to other metro areas in the U.S. this year.

“Maven customers will experience seamless smartphone and keyless integration with the vehicle. Maven customers use its app to search for and reserve a vehicle by location or car type and unlock the vehicle with their smartphone. The app also enables remote functions such as starting, heating or cooling and more. Customers can bring their digital lives into the vehicle through Apple CarPlay, Android Auto, OnStar, SiriusXM radio and 4GLTE wireless. Each vehicle will provide an ownership-like experience with the convenience of car-sharing.”

Residential: In Q1, Maven will launch car-sharing services for Chicago residents in partnership with Magellan Development Group, the company says, and it will also expand an existing and similar program in New York City with Stonehenge Partners. This gives apartment building residents on-demand access to vehicles and preferred parking options. Both programs combined will offer service to more than 5,000 residents.

Peer-to-Peer: Existing global initiatives include peer-to-peer car-sharing through the CarUnity market place in Germany. Nearly 10,000 users have signed up in Frankfurt and Berlin since mid-2015, the company says. This is an opportunity that could help GM stave off the fact that with many people in urban areas not using their cars very much — the average car is idle 96% of the time, Steyn noted today — and this is one way of getting people to use them anyway.

Campus: Various programs are running on GM campuses in the U.S., Germany and China to refine and test future Maven commercial offerings.