A new mobile application from a co-founder of Reputation.com wants to re-imagine how consumers interact with their smartphones. Instead of unlocking the device and launching apps for common actions – like replying to calls, texts and emails; making to-do lists; seeing what’s nearby; or reading the news, for example – an app called Defumblr will put this information directly on the phone’s lockscreen.

There are, of course, already a number of homescreen applications, launchers, and widgets designed for Android smartphones – the market where Defumblr will initially compete. But this app is envisioned as not just an add-on to Android’s existing user interface, but rather a new kind of smartphone interface altogether, explains Raefer Gabriel.

“We built Defumblr to help users get the most out of smartphones without the burden of digital housekeeping. Fundamentally, Defumblr is a new kind of smartphone interface that helps people manage digital information efficiently,” he says. “It’s about giving the user control.”

In 2013, Gabriel co-founded Delvv, the company behind Defumblr, after previously serving as Chief Scientist and co-founder at Reputation.com. Felice Miller Gabriel, Delvv’s President and founder, meanwhile, is also a founding partner at Alaricus Capital. The founders are also husband and wife.

In addition to being a new interface, Delvv’s app is intelligent – it uses machine learning to determine what matters and when, then presents that information to you in the form of bite-sized widgets. These appear like colored circles on the Android lock screen, each with its own purpose. 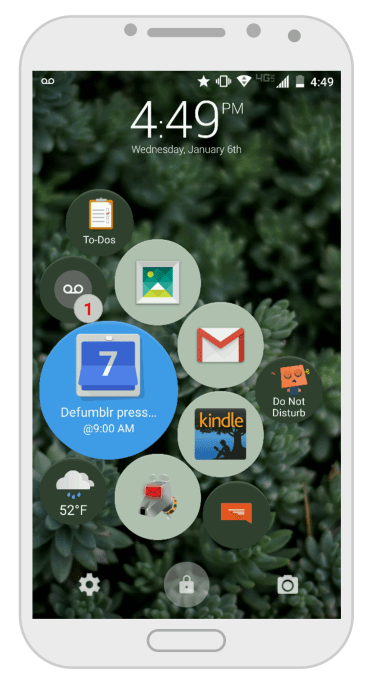 Today, there are 17 customizable widgets available, including those that help with Messaging (view and reply to calls, texts, emails); Quick Apps (one-swipe access to frequently used or contextually appropriate apps); Calendar (events); To-Dos; News; Nearby (location-based recommendations for things like shopping, gas, coffee, etc.); an Activity Tracker (smartphone activity like number of messages, or where notifications are from).

It’s clear that the challenge Defumblr wants to solve is a valid one, but what’s not as certain is whether or not users want a third-party application to do the work.

After all, the idea to simplify the smartphone based on what you’re doing or where you are at the time, while also surfacing key information, has been tried before. For example, a startup called Aviate developed an app aimed at offering a new way to present the most timely and relevant information on Android homescreens. Failing to find explosive growth, Yahoo eventually bought the company for $80 million in an effort to establish its own foothold in the smartphone market where it doesn’t have its own mobile OS or app store.

Even iOS, in its own way, is trying to bring more intelligence to the smartphone’s interface. It now allows for widgets in the notification center, and its Spotlight Search feature has been more recently upgraded with more smarts, too. Thanks to iOS’s Proactive assistant, your phone can now point to your frequently used apps, based on when you use them; and can alert you to events, show location-based recommendations; highlight breaking news; and more.

That leaves Defumblr’s path ahead a little more uncertain. Functionally, it’s very similar to what iOS is already doing today in its latest OS, but brings that to Android users instead. Plus, its circular widgets may not be the sort of user interface redesign that people can adjust to after so many years of swiping through screens filled with apps.

It’s also unclear how well Defumblr can tackle the iOS market. Gabriel says that the team has a Notification Center widget in development, but it will have “somewhat different features and constraints based on the restrictions Apple places on data access for App Store-distributed apps.”

Defumblr is currently a free download on Google Play.

Delvv announced a $3.5 million seed round in May 2015, from a group of private angel investors, with the goal of using machine learning to address information overload, notes Gabriel.