Not long ago, venture capitalists were talking about how Bitcoin was going to transform the global currency system and render governments powerless to police monetary transactions. Now the cryptocurrency seems to be fighting for survival.

The new reality came to light on January 14, when an influential Bitcoin developer, Mike Hearn, declared the cryptocurrency a failure and disclosed that he had sold all of his Bitcoins. The price of Bitcoin fell 10% in a single day on the news — a sad result for those who lost money on it.

Bitcoin did have great potential, but now it is damaged beyond repair and a replacement is badly needed.

It’s still true that most currency and transaction systems today are opaque, inefficient, and expensive.

Take the North American Stock Exchange, the NASDAQ, as an example. It is amongst the most technologically advanced in the world. Yet if I buy or sell a share of Facebook on the NASDAQ, I have to wait several days for the trade to finalize and clear. This is unacceptable; it should take milliseconds.

In Venezuela, citizens wishing to buy anything of value on supermarket shelves wait all day in lines to do so, because hyperinflation causes the paper currencies in their pockets to lose significant value every day.

When migrant workers there send money back to their families in places such as Mexico, India, and Africa, they are gouged by money-transfer companies — paying as much as 5%–12% in fees. And even in the U.S., payment processors and credit-card companies collect merchant fees of 1–2.5% of the value of every transaction.  This is a burden on the economy.

Bitcoin aimed to change this, but it was born with serious flaws. It was unregulated and provided anonymity, so it rapidly became a haven for drug dealers and anarchists. Its price fluctuated wildly, allowing for crazy speculation. And, with the majority of Bitcoin being owned by the small group that started promoting it, it has been compared to a Ponzi scheme.

Exchanges built on top of it also had severe security vulnerabilities. And then there were the venture capitalists who got carried away.

Several of them purchased considerable coinage and then began to hype it as a powerful disruption that could underpin all manner of financial innovation, from mobile banking to borderless, instant money transfers. They also poured millions of dollars into Bitcoin startups hoping to reap even greater fortunes.

But Bitcoin was not ready for prime time. Hearn’s criticism has laid bare the nightmarish reality — a list of negatives that is both long and frightening. 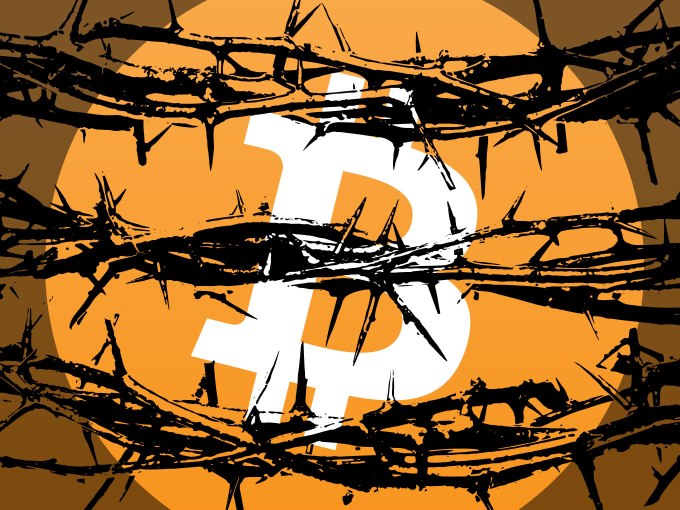 Chinese Bitcoin miners control more than 50% of the currency-creation capacity and are connected to the rest of the Bitcoin ecosystem through the Great Firewall of China. This slows down the entire system because, as Hearn explained, it is the equivalent of a bad hotel WiFi connection. It also gives the People’s Army a strategic vantage point over a global currency.

The Bitcoin distributed network can process only a handful of transactions per second. That causes unpredictable transaction-resolution times and other behaviors that one really does not want as part of a monetary system. Bitcoin fees can, at peak times, exceed credit-card fees, for example.

As if all this weren’t bad enough, the Bitcoin community appears to be engaged in open civil war.  Its members have been censoring debates and attacking each other’s servers. A tiny committee of five core developers that controls the Bitcoin codebase has become the Star Chamber that guides the future of Bitcoin.

This has been a severe blow to the reputation — and wallets — of VCs.  Yet some of them are still staunchly defending Bitcoin.

It’s time to admit that the current Bitcoin needs to be scrapped and to take advantage of the innovations behind the technology that underlies Bitcoin: the blockchain.

The blockchain is a transparent ledger of transactions—concurrently hosted on numerous computers around the world — allowing the creation of digital currencies and virtual banks.

Implemented correctly, it will, I believe, prove to be a better transactional and verification model that we presently use for the global financial system and for many other types of activities such as voting, public registries, provenance of works of art, and real-estate transfers.

In the beginning, Bitcoin was a noble experiment. Now, it is a distraction.

From Bitcoin’s failures, we have learnt how digital communities shouldn’t operate. We have seen how ledger systems can be hijacked. And we have seen the wastage in a mining system that consumed gigawatt–hours of electricity and spawned giant server farms in China solely to crunch numbers to “mine” Bitcoins.

We need to learn from successful open-source technology projects such as the Linux Foundation, which is thriving largely because it has proven its worth as a neutral body to govern all manner of open-source projects that grew too big for small groups to manage in a casual manner. We also need to rethink aspects of the blockchain, along the lines that Hearn and Bitcoin loyalists have suggested.

Let’s also bear in mind what it is that makes some venture capitalists Bitcoin zealots: pure greed.  That is the reason clearest to me for Bitcoin’s failure. Intended as a level playing field and a more efficient transaction system, the Bitcoin system has deteriorated into a fight between interested parties over a pool of money.

In the beginning, Bitcoin was a noble experiment.  Now, it is a distraction.  It’s time to build more rational, transparent, robust, accountable systems of governance to pave the way to a more prosperous future for everyone.