The launch follows this week’s move from Apple to also include Apple TV data in its own App Analytics service, allowing tvOS developers to monitor their apps’ performance, including user engagement, monetization, downloads, and more.

Along with its announcement of Apple TV support, App Annie unveiled some of its latest findings about the early Apple TV app ecosystem.

And the top five categories on the Apple TV App Store, which also included “News,” “Education,” “Sports,” or “Lifestyle” apps – depending on which country’s store was being examined – accounted for the overwhelming majority of free apps on Apple TV, the firm noted. 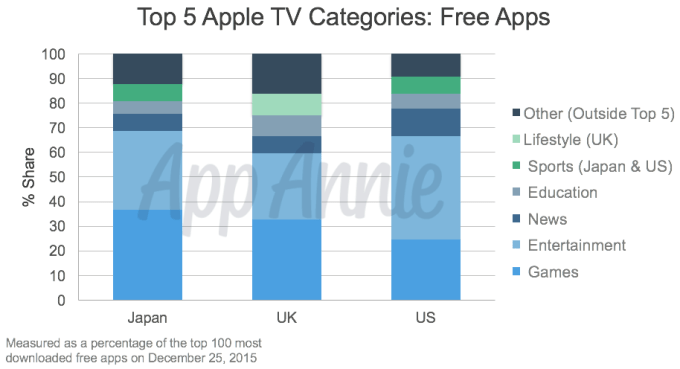 In the U.S., the top 5 categories accounted for 91 percent of apps downloaded, for example, while in the U.K. they accounted for 80 percent.

App Annie additionally took a look at how the top two categories on Apple TV – “Games” and “Entertainment” apps – compared with their respective shares on iPad in Japan, the U.K., and the U.S. 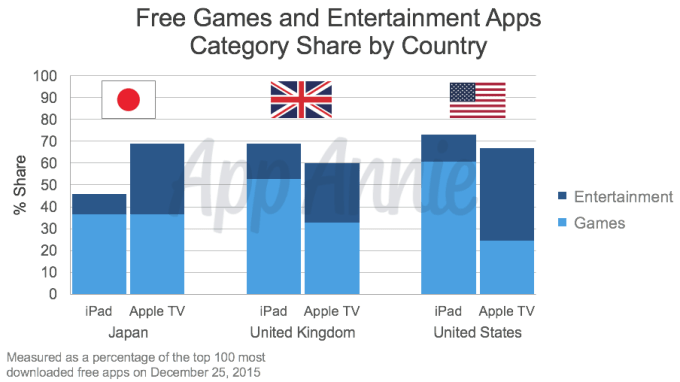 Thanks to App Annie’s new charts, developers will be able to dive into data related to an app’s movement, as they could previously with mobile applications. That means, you could take a look at things like the daily ranks for an app across various countries, or view charts that show the app’s download ranks or grossing ranks plotted out over time.

In case you’re curious, the top 10 free, paid, and grossing apps for the U.S. Apple TV App Store are below. 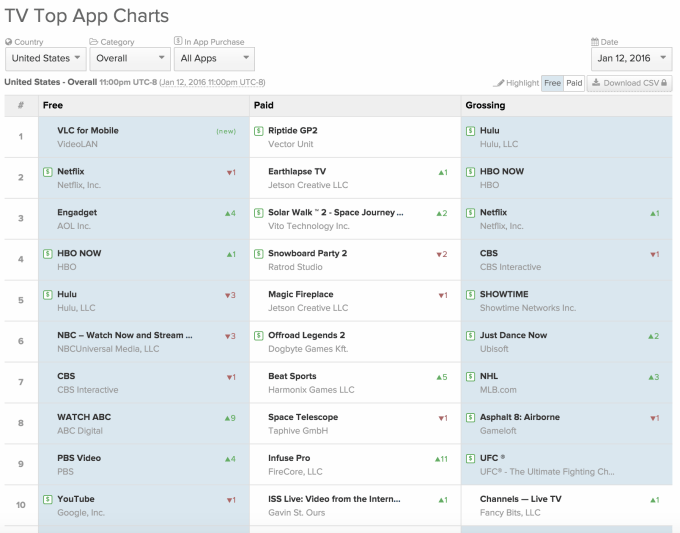 As you can see, media and entertainment apps dominate both the free and top grossing charts. And even the top 10 paid app list shows that early adopters of Apple’s upgraded TV platform are willing to spend on things that go beyond games, with educational apps like “Solar Walk 2,”  “Space Telescope” or “ISS Live: Video from the International Space Station and NASA TV” speckled throughout the top 10.

That’s promising for Apple TV’s potential beyond a TV device or gaming platform, as it shows that customers are interested in exploring other types of applications outside today’s two leading categories.