Spotify, the popular music streaming app with 75 million users, wants to ramp up its profile as a platform for more than just music listening. And to that end, it has linked up with Genius, the startup that annotates music lyrics and other online content, to provide backstory and commentary that pop up as you stream tracks on Spotify. The partnership will kick off with a free hip hop playlist, Behind the Lyrics (Hip Hop), and it will expand next week with Behind the Lyrics (Hits) and more after that. The Genius annotations are available on Spotify’s iPhone app only at first (and only on models after the iPhone 4/4s).

Genius, whose CEO Tom Lehman writes that the stream comes by way of a tweaked version of its service called Fact Tracks, is also running a version of the experience via the desktop but it’s a bit more cumbersome. Making sure you have the Spotify app open in the background, you navigate to a separate page on Genius.com with selected songs and stream from there. 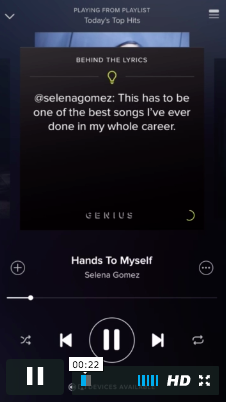 On Spotify’s app, the Genius annotations are triggered when you play one of the songs on the Behind the Lyrics playlists. So, instead of a simple picture of, say, Selena Gomez, you will now see the lyrics to her song come up on the screen, with words highlighted and then expanded with commentary, as well as other profound or funny observations from Selena and others.

Want to opt out of the Genius notes? Don’t listen to the playlist, and find the tracks another way on the platform, because the annotations will stream on the Behind the Lyrics tracks automatically, Spotify tells me.

This appears to be partly because of the limitations of streaming the annotations on Spotify. While you have the option of effectively muting annotations on Genius by not clicking on a highlighted word, here you don’t seem to have the choice. A highlighted word, at least in the demo we were shown, was less interactive and more of a signal of what was going to be explained in the next screen.

With the Behind the Lyrics playlists available to all users, free and paying, the new addition to the Spotify experience is an interesting development.

Many people today use Spotify very much as a background app. Put it on and do your other thing, whether it’s exercise or clean or contemplate what your cat might be thinking as it sits there staring back at you.

Adding lyrics and a constantly changing carousel of information is a way of drawing back your attention to Spotify itself and keeping your eyeballs there. Much like Spotify’s push into video, this is a way for the company to keep users sticky and engaged. And that gives Spotify a way of drawing on that for other purposes, such as advertising, providing other info about things like concerts or selling merchandise. 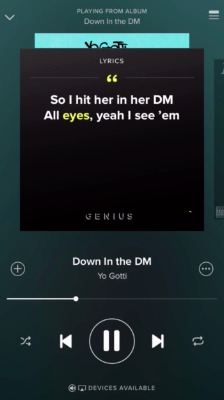 For now it doesn’t look like this is Spotify’s move into being more like Soundcloud, though. Users won’t be able to annotate songs themselves on the platform, although they can go to Genius’ site and become a part of the crowdsourced data effort over there.

But what it is also giving is one more way for artists to create more of a dialogue with listeners.

“Spotify and Genius are creating a really cool connection between me and my fans on another level than I normally can connect with them,” says Tinashe, one of the first artists whose music is getting the Genius treatment. “Not only are they able to hear the music and see the lyrics, but they are also able to understand where I was coming from when I wrote them and kind of get inside my head, which is really cool.”

For Genius, this turn is a mark of how the company and its user base is remaining pretty firmly embedded in its music roots. The company, backed by the likes of Andreessen Horowitz, launched initially as Rap Genius but has since dropped the Rap and expanded to covering all kinds of content, by way of APIs and other partnerships. Just days ago, the company announced that it would power annotations for President Obama’s final State of the Union address, which is being aired today.

Moreover, Genius stumbled after putting a lot of effort into its embeddable annotation option that let any site add explanations like on Genius.com. That feature has failed to take off, leaving Genius looking for news ways to expose people to its value.

To rise above the competition on search result pages for song lyrics, it needs people to know it will bring them something better than AZlyrics, Metrolyrics — or Musixmatch, the lyrics site that already had a desktop integration with Spotify and added a mobile integration last month. Musixmatch also sees how lyrics keep people attentive.

“We’re bringing a new experience to streaming, less listening oriented and much more visually oriented because of lyrics,” said Musixmatch founder Max Ciociola at the time of the Spotify mobile integration.

(And for the record, in case you were wondering as some have been, Spotify says it is not changing its deal with Musixmatch in the wake of the Genius partnership. “Spotify’s partnership with Genius is complementary to Musixmatch which provides the raw lyrics for a broad catalog on Spotify,” a spokesperson told TechCrunch. “We have no plans to replace Musixmatch; we’re adding a new layer of context behind the lyrics to create a deeper connection between fans and their favorite artists.”)

Asked if the partnership with Genius involved any investments or revenue shares down the line around music plays, Spotify would not comment on any financial terms of the deal. Since the annotated playlists will be available to all Spotify users, free and paying, it gives the feature as wide a release as possible.