Last week, NASA announced a new program called the Planetary Defense Coordination Office (PDCO) which will coordinate NASA’s efforts for detecting and tracking near-Earth objects (NEOs). If a large object comes hurtling toward our planet, it will be this office’s job to identify it, determine a way to deflect it, and give the public a heads up.

Most asteroids and comets in our solar system are small and stay safely in orbit within the asteroid belt between Mars and Jupiter. Others, however, are large enough to do damage and are in orbits that bring them close enough to our planet to make NASA nervous. NEOs include asteroids and comets whose orbit brings them in close proximity to the Earth.

In order to protect the Earth from these potential hazards, the PDCO has two main roles. First, it is responsible for finding and characterizing these NEOs. Second, the PDCO is in charge of coordinating emergency efforts with other agencies and governments if a large NEO was predicted to impact Earth.

In preparation of an impact of considerable size, NASA has long-term planetary defense goals that include the development of asteroid deflection technologies. So far, effective asteroid deflection strategies have not been decided upon, let alone developed.

NASA stated, however, that they do have an asteroid impact and deflection mission concept in the works with the European Space Agency. This mission, “if pursued” (funded), would “demonstrate an impact deflection method.”

In the event of an unavoidable asteroid impact, PDCO would work in partnership with FEMA, the Department of Defense, and other U.S. agency and international counterparts to coordinate emergency efforts.

NEO encounters themselves are not rare events, but usually they are small enough to burn up in our atmosphere. NASA released the diagram below to show the frequency of NEO encounters. Between 1994 and 2013, NASA measured 556 bolide (bright explosion caused by an asteroid impact) events. 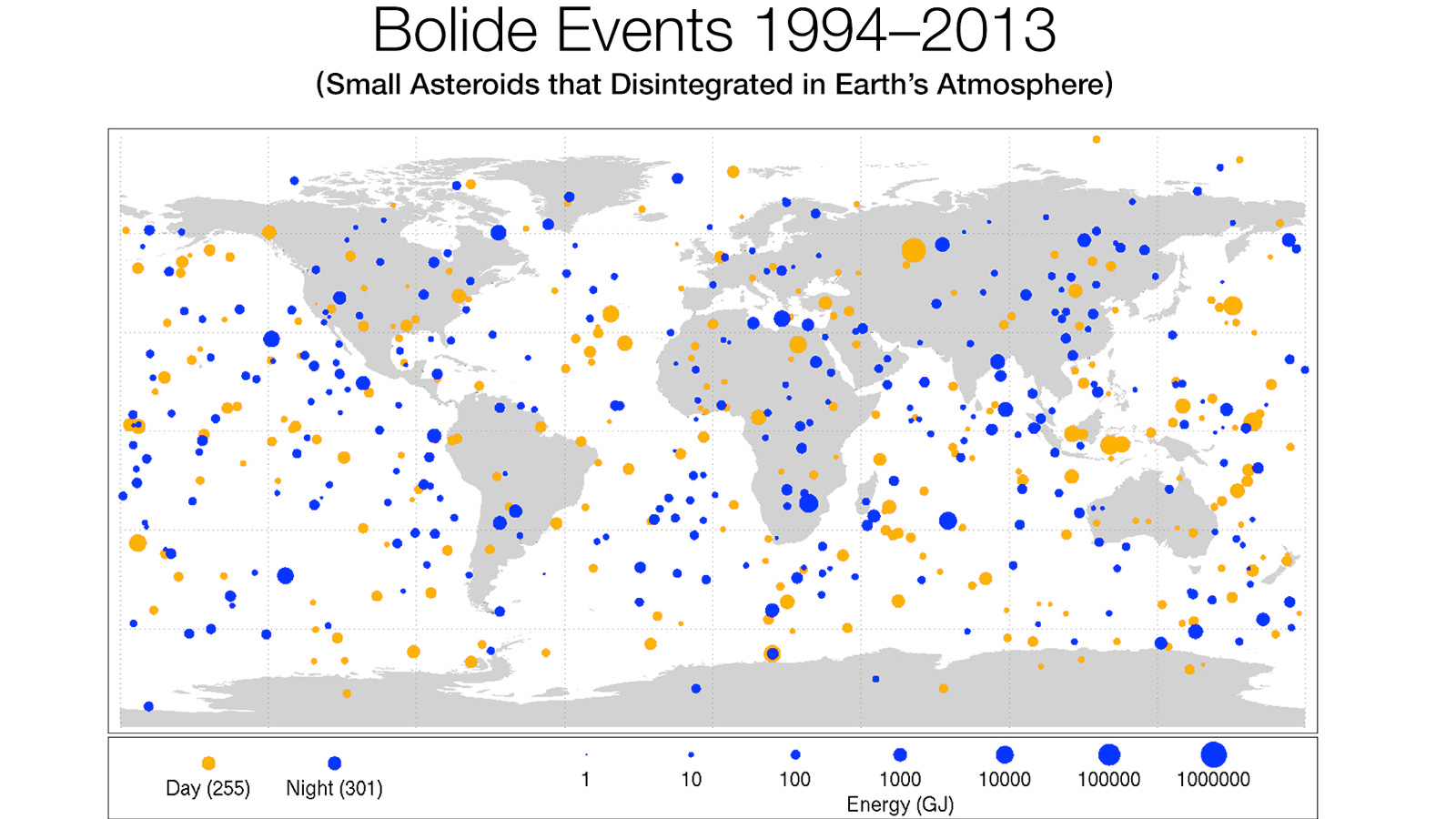 The vast majority of these asteroids were small enough to completely burn up in the atmosphere. We probably saw them as bright shooting stars. The notable exception was the 2013 Chelyabinsk event (the large yellow dot in Russia on the map) which was the largest asteroid to hit the Earth during this time period.

The scary part was that NASA wasn’t aware of the Chelyabinsk asteroid because it was relatively small (about 60 feet, or 19 meters, in diameter) and in the weeks before it hit us it was too close to the Sun, making it difficult to detect.

But the Chelyabinsk asteroid is the exception, not the rule, and with improved technologies NASA has been able to detect smaller asteroids over the years. NASA notes that “more than 13,500 near-Earth objects of all sizes have been discovered to date – more than 95 percent of them since NASA-funded surveys began in 1998.” 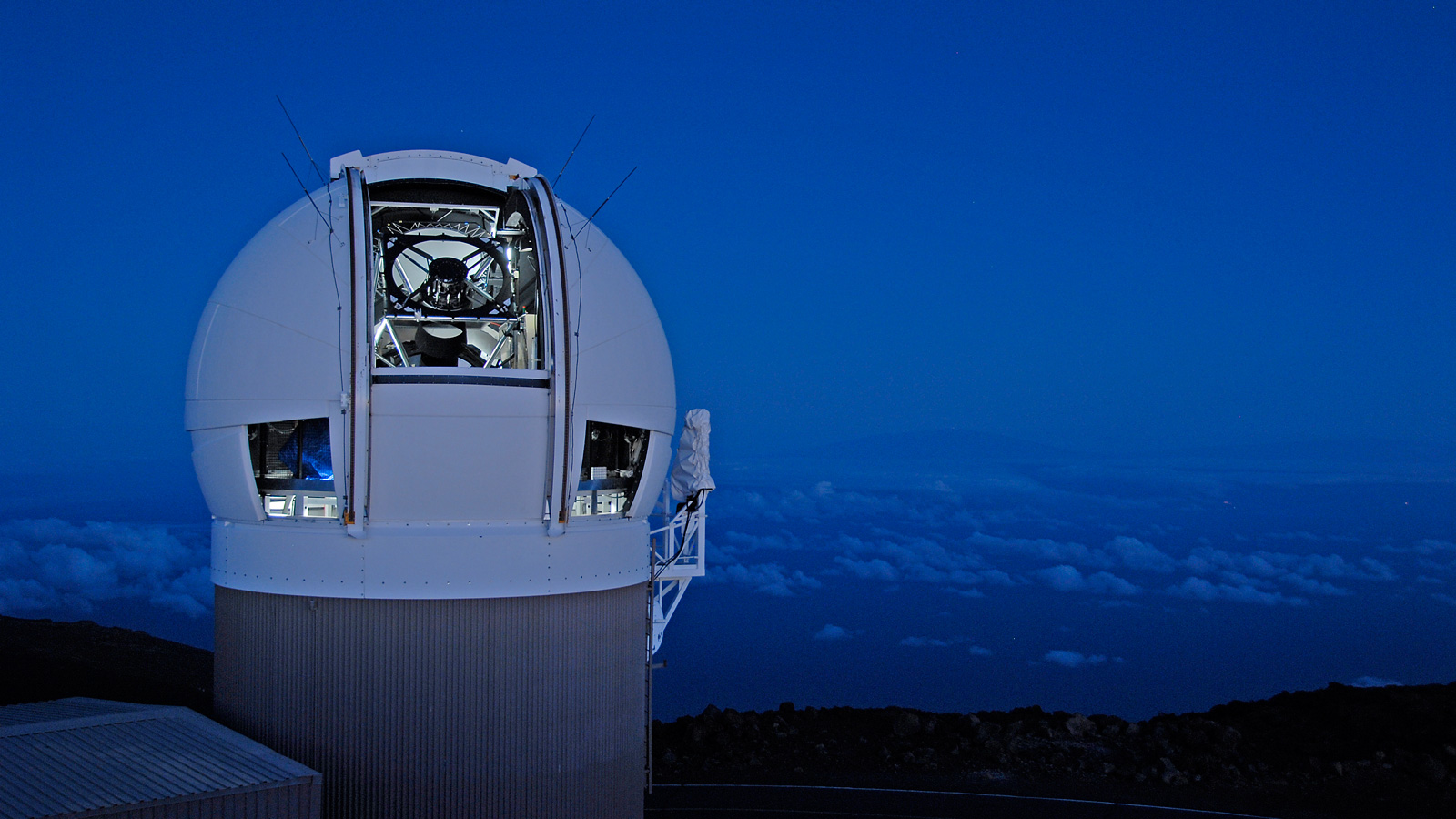 Astronomers detect NEOs using ground-based telescopes around the world that constantly take pictures of the night sky. If an astronomer detects an object that moves from one image to the next, they can notify the Minor Planet Center, which keeps track of all known asteroids and comets. NEOWISE, the space-based infrared telescope, can also search for NEOs.

To put those sizes in perspective, the Chelyabinsk asteroid was only 60 feet across and caused an explosion equal to about 500,000 tons of TNT detonating. This type of event reminds the world of the importance of NASA’s asteroid detection efforts.

The government seems to have recognized its increasing importance as well. In the 2016 federal budget, NASA received $50 million for NEO observations and planetary defense. In 2010, that budget totaled a mere $4 million.

Large asteroid impacts, while uncommon, can be a large threat to national security and to the human race. Here’s hoping our asteroid detection and deflection strategies improve (and are well-funded) more quickly than the fast approaching NEOs that may be hiding in the darkness of space.