After expanding access to President Obama’s State of the Union address by making it available on Amazon for on-demand streaming, the White House is now targeting the younger demographic with the launch of an official account on social media service Snapchat. White House’s director of product management Josh Miller cited Snapchat’s strong user numbers – including over 100 million daily actives, 60+ percent of whom are between the ages of 13 and 34 – as part of the reasoning behind the launch of the new account.

Starting tomorrow, the White House will post to its Official Story, offering Snapchat users a behind-the-scenes look at the State of the Union prep, including additional footage and camera angles not offering through other channels, including TV broadcasts, its YouTube channel, or elsewhere.

However, there’s content available on the account today, available under the username “WhiteHouse,” including a brief video from the Oval Office. 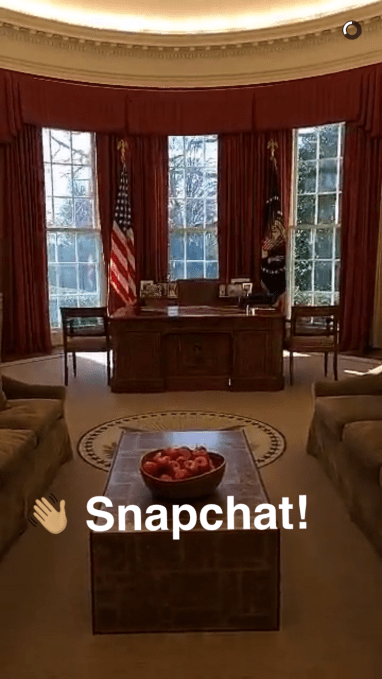 The White House, of course, is no stranger to embracing social media, having already established a presence on Facebook, Twitter (including the recently launched @POTUS account), and it has posted live GIFs on Tumblr, short videos on Vine, and photos on Instagram.

The White House also posted the SOTU address on blogging site Medium in the past, and took questions from YouTube stars in post-address interview – something it’s now doing again.

However, the addition of Snapchat into this social media mix is another indication of the app’s growing importance in the media world – especially when it comes to reaching the youngest, highly mobile users who don’t tend to consume media through traditional means, like newspapers, magazines, or even radio or TV.

While a core group of Snapchat’s audience may not be old enough to even vote yet, there’s no harm in engaging with them ahead of that day in order to influence their still-forming political opinions.

According to data from Pew Research, Snapchat is now the #3 network for teens, behind Facebook and Instagram, with 41 percent of teens 13 to 17 using the platform. It also appeals to young adults – and in particular those of college age, where, according to one study, 4 out of 5 college students are now using the app.

While once known best as the “disappearing” messaging service, Snapchat has since successfully expanded beyond its ephemeral messaging roots to develop a social platform for sharing content in a more authentic way. That is, it’s a place where users aren’t competing to rack up likes, hearts, or where user profiles publicly boast their followers, or video view counts, as Justin.tv and Twitch.tv co-founder Justin Khan recently explained, describing Snapchat’s appeal.

In particular, Snapchat’s Stories feature is a becoming one of the app’s go-to draws. These short-form, mobile-friendly media collections have grown over time to attract millions of users. Live Stories, for example – meaning the photo and video montages that offer live looks at events – are capable of drawing in an audience of 20 million in 24 hours, according to data the company provided earlier this year. In the political arena, Hillary Clinton previously used the format to document her presidential campaign rally.

As for the new White House Snapchat account, the launch is a continuation of the company’s efforts at “meeting people where they are” – that is, on the social media platforms they use, Miller notes.

“In light of the number of Americans who use the service to consume news and share with their friends, the White House is joining Snapchat to engage this broad cross-section of the population in new and creative ways,” Miller says.