Swiss dating app startup Blinq is playing around with a little algorithmic hot or not catnip, with a plan to add a machine-learning powered attractiveness assessment feature to help its users pick the photos that show them at their best.

In the meanwhile, it’s launched the feature as a standalone website, called howhot.io, to test how much appetite there is for robotically judged hotness. (The website launched last week and, inevitably, after two days had racked up more than two million unique visits, so it’s not hard to see why they’re ploughing this click-festy furrow…)

“We are going to integrate the algorithm in the Blinq app,” co-founder Jan Berchtold tells TechCrunch. “The users will have the possibility to upload several images before they set up their account. By doing so they can test which of them will probably perform better.”

The tech powering the algorithm was developed by third year PhD student Rasmus Rothe, of the Computer Vision Lab at ETH Zurich, including using image data and attractiveness ratings supplied by Bling — the latter gleaned from the binary ‘hi or bye’ choices Blinq users make as they swipe through potential matches.

“We used more than 100,000 images and more than 20 million ratings between users from our data base,” says Berchtold, explaining the role the app’s data played in the algorithm’s aesthetic training.

On the age front, Rothe says it was trained on images from IMDb and Wikipedia — along with “some other smaller datasets”. “We won the age estimation challenge at International Conference of Computer Vision 2015 in Chile (the paper) against 130 other teams with this method,” he notes.

Of course guessing age is a hard problem, even for humans. And the visual expression of age can hardly be described as an exact science. So the algorithm’s guesses can range pretty widely/wildly. In my case across more than a decade, despite the sample photos being taken but a few years apart… So, yeah, age is a hard problem. And photos can lie — a lot.

“The average error [for the algorithm] should be around 3 years,” says Rothe. “Humans can be up to 3.5 years across the full age range (usually you are better at guessing the age for people who have a similar age as you)… so it should be slightly better than human prediction. The problem is that people have high expectations at such a system so 3 years might seem a lot.

“This is also due to that in many cases when you estimate the age of a person you have a lot of context (i.e. you know that person graduated college a year ago and thus must be 23+/-1 year, or is in the same friend group and thus must be of similar age),” he adds.

Obviously the algorithm lacks any such context — so it’s effectively guessing ‘blind’, as it were. Which perhaps explains its far worse accuracy level in my case. But hey, humans sometimes still think I’m this old too… 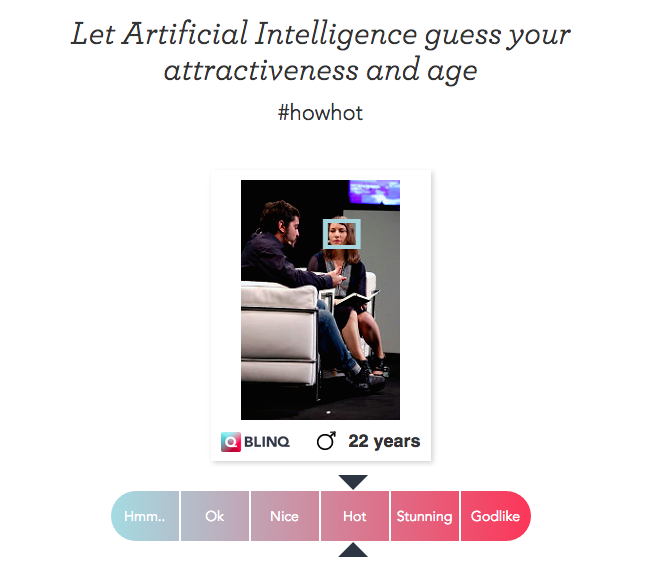 On the hotness front, Rothe says the team created an attractiveness ranking for men and women from the data supplied by Blinq to enable the algorithm to learn which specific features contribute to an individual being ranked in the top 10 per cent (or 20 per cent, or 50 per cent) of their gender.

“The neural network itself then learns what parts of the face to look at,” he says. “Visualizations showed that it tends to focus on parts of the face which are ‘non-standard’, i.e. if you have beautiful eyes, a large nose, no hair, a sexy beard, etc… ”

But beauty’s in the eye of the beholder right? So how can an algorithm meaningfully assess hotness? Rothe says the team’s initial experiments actually involved trying to learn to be more subjective (he wrote another paper on this). Although that aspect of the research is not being fed into the Blinq implementation at this point — so the forthcoming photo-judging feature in the app will purely be a median measure of attractiveness.

“In that paper [on individual preference prediction] we tried to learn personalized preferences. i.e. if you like men with a beard, after you have liked a couple of men with a beard the proposed system would recognize that and know that you prefer men with a beard (without ever telling the system what a beard is). For howhot.io we simplified the process and just learned the ‘objective’ criteria… which is very difficult, because it is really a subjective thing!” he adds.

Blinq currently has some 200,000 monthly active users, with the biggest markets being Switzerland, Germany, Turkey, the U.K., the U.S. and Thailand, according to Berchtold.

As well as its plan to offer AI-powered hotness recommendations for a user’s photos, it has a few existing location-based tricks up its sleeve in a bid to stand out in a crowded — and Tinder-dominated space — such as a feature that shows users which are the bars and clubs in their city popular with singles, and a real-time hyperlocal Bluetooth beacon powered feature that can flag up if any of a user’s current matches are in the same bar right now (provided the bar has been kitted out with Blinq’s Estimote iBeacons).

Of course it’s not hard to envisage Blinq mashing up its forthcoming AI attractiveness smarts with its existing location-based features so it could, in future, point users to the locations containing the most aesthetic singles — as judged by its robotic averages. Then its “Hotspot” trending singles bar/club feature might be able to live up to its name.