We’ve seen some pretty cool stuff on day 1 of CES 2016, but probably nothing more eye-catching than the EHang 184, a human-sized drone built by the Chinese UAV company EHang.

Yes you heard right — a giant autonomous drone that fits a human.

It’s basically what you would expect to see if someone shrunk you down to the size of a LEGO and stuck you next to a DJI Inspire. Except no one was shrunk, and the giant flying machine was sitting smack in the middle of the CES drone section.

EHang, which was founded in 2014 and has raised about $50M in venture funding to date, was pretty gung-ho about telling everyone at CES that the 184 was the future of personal transport. And for the most part, people were too in awe to question them.

But the reality is that the company probably was using the 184 as more of a marketing tool for their standard-sized drones like the Ghost. Not that we’re saying that the 184 will never be a real thing, just that it probably isn’t coming to a Best Buy near you anytime soon.

None of their employees were in tune with the drone’s technical specifications, let alone an MSRP or release date. But we did snag a press kit from the company, which actually provided some worthwhile information.

The drone is about four-and-a-half feet tall, weighs 440 pounds, and will be able to carry a single passenger for 23 minutes at a speed of 60 MPH. The 184 also has gull-wing doors and arms that fold up. 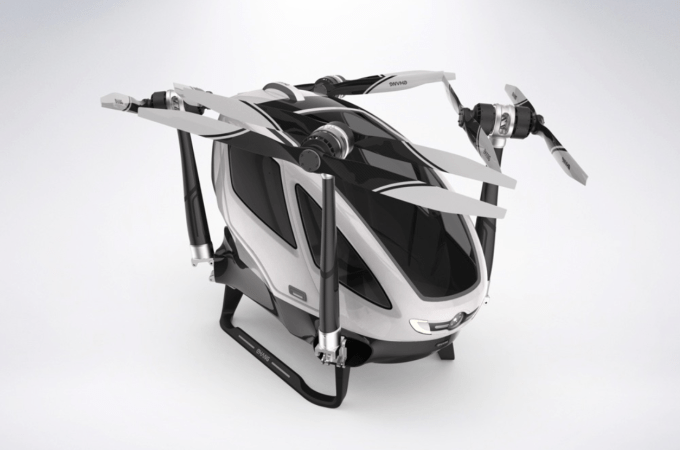 EHang said that the drone will be totally automated, meaning passengers will input a destination and have no control during the flight. The company says this will make the machine safer by eliminating “the most dangerous part of standard modes of transportation, human error.”

This also means that passengers are basically helpless in case anything goes wrong, but the company notes that their fail-safe systems include multiple backups for each flight system, as well as a feature where the aircraft will immediately land if a passenger’s life is at risk.

Ultimately, it’s probably going to be a few years before we ever see the EHang 184 flying in anything more than a demo video. Plus, we can’t imagine what the FAA would say about the thing.

That being said, it’s nice to see a company thinking ahead and inspiring the drone community.