Last summer, gaming tech company Razer said that it was working with Intel on a webcam that would take in-game video recording to a higher level. Today, at CES in Las Vegas, the company is taking the wraps off that product.

Stargazer is Razer’s new $200 camera, shipping in Q2, that will let game players record themselves in high definition, with the focus on catchy new features, such as a new way to immerse players directly into games without resorting to green screens; and a new 3D scanning feature that will first make its debut in Minecraft, courtesy of Intel’s RealSense technology. 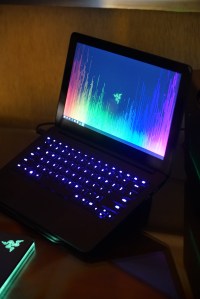 Alongside the Stargazer, Razer is also showing off three other products to fill out its hardware for the dedicated gamer — the Razer Blade Stealth and Core — respectively a new Ultrabook and desktop graphics extension; and a new Nabu digital watch. (Extending the company’s Nabu smartband brand, it is “Not a smartwatch but a watch that’s smart” Razer says.)

The Stealth, which begins shipping this quarter, starts at a competition-busting $999 for the 8GB model (256GB model: $1599) while pricing for the Core has yet to be made public. Check out my video below with Razer CEO and co-founder Min-Liang Tan talking about all three and the company’s wider ambitions in the next phase of gaming and computing.

With virtual reality, immersive 3D and social experiences fast becoming the norm for high-end games and gamers, Razer is quite literally jumping into the frame with both feet. As a webcam, the Stargazer is setting a new bar for what gamers can have to record themselves in the middle of the action.

Video capture comes in at 60 frames per second at 720p (compared to 30 FPS in most of today’s webcams). It also can be used in high-definition mode, recording 1080p video at 30 frames per second. Sound is getting some attention, too, although perhaps not as much as videos: the microphone is noise-cancelling and dual-array.

At the center of Razer’s webcam ambitions is the company’s partnership with Intel. Last year, we uncovered that Razer had taken a strategic investment from the tech company that catapulted the gaming startup’s valuation to over $1 billion. And this year, that deal is bearing fruit on the product front.

The Stargazer is based around Intel’s SR300 camera, which is built on its RealSense technology — an HD camera that uses AI to “see” like a human eye to track depth and motion, but also incorporates other features like infrared to detect much more than a human eye can, and features such as gesture recognition to launch different commands on the computer connected to the webcam.

This gives the Stargazer and whole set of features that set it apart from other webcams on the market today. A Dynamic Background Removal feature essentially mimics the more clunky approach of using green screens to eliminate the mundane bedroom/office/living room background behind the average gamer, and puts the user directly on to whatever action is unfolding in the game. This is perhaps a small detail but one that will definitely improve the experience by increasing screen visibility and just make it look a lot more slick.

The Stargazer features, Razer says, works with OBS, XSplit and Razer Cortex: Gamecaster broadcasting software. But even if Razer is built “by gamers, for gamers” as its motto says, it also understands that people buying these devices may be using them for more.

The same features to remove backgrounds in gaming streams, Razer says, can also be used in Skype video chats and also with real-time motion capture technology, such as that of FaceRig. Other features include face and object 3D scanning and facial recognition which can be used as a security feature to unlock your computer if you use Windows (via Hello).

Or — in a more fun twist — to scan objects in 3d to upload them into other environments. While the 3D feature will work with development engines like Unity, the first application of the latter of these is a fun one: Intel says its first public integration with the feature will be in Minecraft.

Notably, the Stargazer currently is configured only to work in Windows 10 environments. It will be interesting to see how and if Razer expands that to include Android or other platforms. (After all, as CEO Min-Liang points out in the interview below, Android remains a big priority for the company, on the back of its OUYA acquisition and Razer’s own developments in the space with the OSVR initiative for virtual reality.)

That lack of support, however, also opens the door to other companies like Apple or Google developing products in their own right.

Gaming at the Core

If the Stargazer is also a mark of the shape of things to come for Razer, the company’s new Ultrabook and graphics box are reminders of what the company still remains at its heart: a games business.

The Blade Stealth Ultrabook — running on a speedy Intel Core i7 processor — comes with a crystal clear 4K display in a body that is just 0.52 inches thin and 2.75 pounds in weight. It’s a slick addition to the company’s laptop range at a time when the other Blades are yet to get upgrades (but we believe that will come later in the year).

The feature that stood out most for me, however, is the device’s keyboard. Using the Chroma backlit feature that Razer has been injecting into peripherals like mouses and keyboards, Razer has upped the ante on the Blade Stealth.

Each key has its own color range, which can be programmed individually or in zones. This makes for a pretty interesting and complementary experience for gamers — where, for example, you can use different sections or keys for individual functions, or to heighten the experience of being injured or getting re-energised with flashes of colored light. 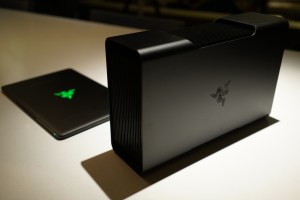 Again, for those who are not going to buy the Blade exclusively for gaming, this could also be used to interesting effects — for example to create shortcuts in other software, or even to make some software simply work. Music composition and synesthesia, for example, could take on a whole new generation of coverts.

The same Chroma color scheme is also present in the Core, although to a much less dynamic end: mainly for aesthetics, it seems. The Core, elegantly, runs on a single Thunderbolt™ 3 (USB-C) connection that supplies both data and power, and it works with both AMD and NVIDIA graphics cards. 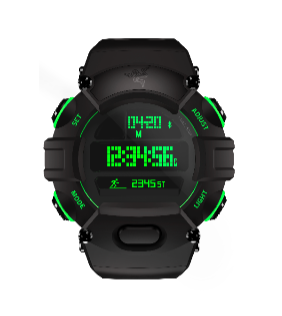 In a sea of high-end gaming hardware, it’s almost as an afterthought that Razer is presenting its fourth standalone gadget at CES. (It also partnered with Lenovo for a new display announced earlier in the week.)

The Razer Nabu watch is much less a “smart watch” as it is a basic digital timepiece with some nice connected features. Available in late January and priced at $149.99, the Nabu watch is an extension of the company’s Nabu activity trackers that were unveiled last year.

In addition to telling you the time (duh!), they also provide discreet notifications for specified, fitness tracking and some social functions.

Full specs for the other hardware below.