From its debut to the world as a Jeopardy champion in 2011, IBM’s Watson has made a name for itself as a powerful artificial intelligence platform for large enterprise applications, from medical research through to finance. Now IBM is aiming to take Watson to the consumer.

Today at CES, IBM CEO Ginny Rometty unveiled strategic partnerships with sportswear maker Under Armour, Softbank Robotics’ Pepper and more, which are using Watson’s machine learning algorithms and AI to run intelligent and more personalised apps and other services. This is the latest step in IBM’s Watson expansion: earlier this year the company started a Cognitive Business Solutions unit and also a separate IoT center in Germany. And on stage today, Rometty also noted that IBM has made some 30 acquisitions to build out its expertise and data.

Under Armour says that it will use Watson in its fitness and health apps. A new version of its Record app — which first launched a year ago as an activity aggregator and monitor (integrating data from wearables from Jawbone, Withings and Garmin) — will now start to include different AI features.

The first of these will be a “just like me” feature which will compare users with anonymized other individuals to provide some insights about that person’s performance and also make suggestions. Later, the plan is to include a Siri-like personal trainer called the Cognitive Coaching System. Essentially what Record will do now is learn more about you based on your activity, sleep and nutrition data and provide suggestions on how to improve your performance.

Record is a first step for IBM and Under Armour, the companies say, with plans also to create apps for athletes to tap into the wider pool of big data that IBM is amassing (sometimes ingesting that data through its own Watson applications): these will include some interesting data twists, such as the effect of weather on performance and training (think here of IBM’s acquisition of The Weather Company).

“When it comes to digital health and fitness tracking, the past ten years have been about data collection,” said Kevin Plank, Founder and CEO, Under Armour, said in a statement. “We’re now at a point where a shift is occurring and consumers are demanding more from this information.”

What exactly does “strategic” mean in this context? IBM says that both companies are contributing employees, tech and resources to develop the Congnitive Coaching System.

IBM is also working with Japan’s Softbank on the development of Pepper, its new robot that is now starting to ship outside of Japan for the first time.

Watson-powered Pepper will draw on a wide range of data sources, from images and text through to social media and video. IBM says the idea is to give the robots the ability to “understand the world the way humans do — through senses, learning and experience.”

“This is no longer in the world of science fiction,” said Kenichi Yoshida, director of SoftBank Robotics, on stage today. 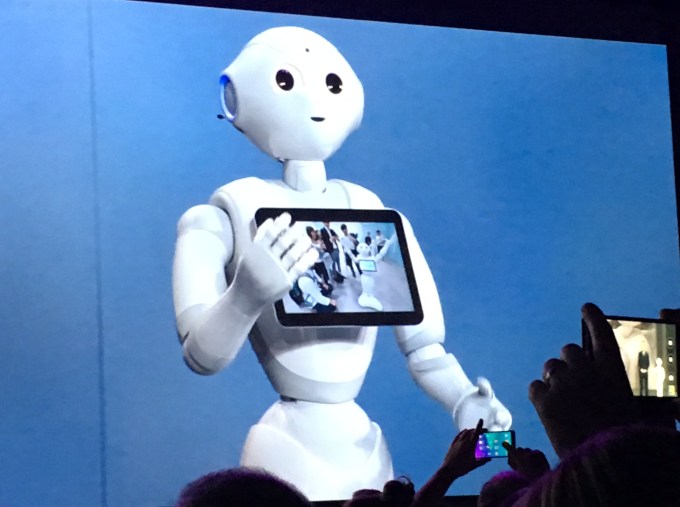 The first Watson-powered robots will be piloted in hospitality and consumer retail environments, IBM says, giving a wider audience first-time, first-hand experience with the platform. The thinking here is not that robots like Pepper are replacing sales assistants, but that they are replacing some of the more dry kiosks that had already replaced them.

“Today’s self-service options in retail environments are typically tablets or kiosks, limiting the scope of how truly interactive and intuitive the customer experience can be,” IBM notes. “With a robotic assistant, users can have a natural conversation where their words, as well as gestures and expressions are understood.”

In Japan, some of this is already in action. Rometty noted that there are hundreds of Pepper robots already being rolled out in Nestle retail stores and in banks in Japan, where they are helping with things like customers buying coffee machines after brief Q&A sessions. Since going on sale in mid-2015, Pepper robots have consistently been selling out in their limited runs.

Indeed, Pepper is not just a simple B2B product: the idea is that Watson will be loaded on to the Pepper robots by way of an SDK, giving developers the ability to modify and tailor how it works.

Other partnerships covered today by Rometty included a new diabetes test from Metronic that will be able to detect potential hypoglycaemic events hours in advance of them actually happening, to help prevent them. Unlike the Under Armour and Softbank partnerships, however, the test is not yet available as it’s still making its way through regulatory hurdles.