Twitter is announcing a new “conversational” ad unit today, where users are prompted to personalize and share a marketer’s message.

These ads are similar to Twitter’s existing Promoted Tweets, but with a key difference — the tweet is more like a poll question, where users can weigh in by choosing from multiple hashtags. After they hit one of the call-to-action buttons in the ad, they’ll be presented with an automated tweet featuring their chosen hashtag (as well as the marketer’s photo or video), which they can then personalize. Afterwards, they get a message from the brand thanking them for their participation.

For example, Samsung Canada ran an ad with the message, “It’s Sunday, and you have no plans. Is it #TimeToStay or #TimeToGo?” while Lifetime asked “Who won the battle, #HighlandsVoices or #StayTuned? VOTE before the premiere of #PitchSlapped Jan 5th at 10/9c!” 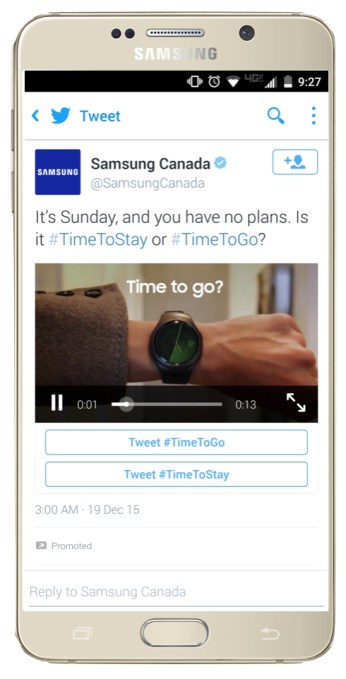 To a large extent, Promoted Tweets are already meant to be conversational, since users can already retweet them, reply and perform all the other interactions that they’d have with a regular tweet.

The conversational ads seem like a more effective way to encourage participation, though. There’s an element of interactivity — you’re not just randomly sharing a marketer’s tweet, you’re also adding your own touch, if only in a small way.

For better or for worse, this may mean that you’re about to see more users sharing marketing content with their followers. That’s good for advertisers, of course — as Twitter writes:

Each shared Tweet is powerful because it drives earned media for the brand at no extra cost, resulting in higher ROI. Additionally, research has shown that organic conversation about a brand delivers significant value for advertisers.