With its first major product release since its acquisition by watchmaker Fossil Group in November, Misfit today debuted its latest entry in its line of fashion-forward fitness trackers with the launch of the Misfit Ray. The fitness and sleep monitor features a cylindrical aluminum body, and works with the company’s other Misfit-branded or custom accessories, and can be worn as either a bracelet or a necklace. In addition to its health-monitoring functions, the new Ray can also interoperate with Misfit Link, the software that lets you control things around you – like switching the lights on or off, changing your music, taking a selfie, and more.

Style-wise, the Misfit Ray is a bit of a departure from the company’s other fitness trackers, the Shine, Shine 2, Flash, and the smart button Link, which feature a more traditional, circular design that recalls a watchface rather than something that’s more competitive with the slimmer Fitbit.

Instead, the Ray is 12mm in diameter and 38mm long, which makes it easier to be worn amid a row of bracelets, perhaps. The tracker comes in both Rose Gold and Carbon Black, and includes a 3-axis accelerometer like the one found in the Misfit Shine 2. Also included is a vibration motor that is used to remind you to get moving – similar to how the Apple Watch will remind you to stand after a period of inactivity, for example. 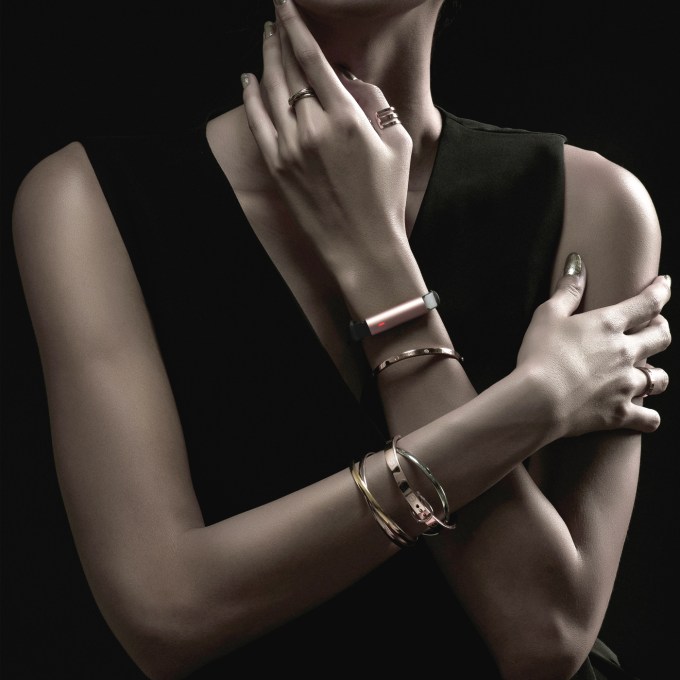 The Ray also has a single multicolor LED, and can alert you to incoming texts and calls as well as buzz a silent alarm. Like other Misfit wearables, the device is water resistant up to 50 meters and it doesn’t require charging. (The battery lasts for 6 months, and is user-replaceable, the company says.)

The new device will begin at $99.99, which makes it the same price as the newer Misfit Shine 2.

Basically, Misfit has repurposed its tech into a slimmer form factor to give consumers a choice that’s more about aesthetics, rather than a new or expanded feature set. However, despite the new look, the Ray is not really competitive with the high-fashion Fitbit products, like Tory Burch’s line, which turns the tracker into a more elegant accessory.

Instead, the Misfit Ray still ships with a sporty, rubber band, making the device feel more casual. That said, the price makes it much more affordable than Burch’s gold and silver accessories, which start at $165 and go up to $195, and still require you to buy the Fitbit separately.