Electric vehicles may be the future of transportation, but they can travel only as far as there are places to charge them.

Often called the “Tesla of scooters,” Taiwanese startup Gogoro is known for its sleek, battery-powered two wheelers. Gogoro has launched in Taipei City, where it is based, and Amsterdam so far. In Taipei City, backing from the government has helped it build a network of standalone charging stations. The company, however, wants to expand into markets where it doesn’t the same level of civic support. Today Gogoro announced a new initiative at the Consumer Electronics Show in Las Vegas that will help it do just that.

Called the Gogoro OPEN Initiative, the program includes a network of miniature chargers, called Gogoro GoChargers, that are about the size of a footstool and designed to be placed inside homes and retail stores. The company hopes that an increase in places to swap batteries will encourage more consumers to purchase Gogoro Smartscooters (which start from about $3,000), just as Tesla’s home charging stations made owning its electric vehicles a practical option for more people.

Founded in 2011, Gogoro raised $150 million while still in stealth mode. Since its official debut one year ago, Gogoro has secured another $30 million in funding from investors including Panasonic and the National Development Fund, which is backed by Taiwan’s government.

Government support has given Gogoro a strong headstart in Taipei City. Gogoro Smartscooters first went on sale there in August and since then, the company has sold over 4,000 units and built more than 140 charging stations in five Taiwanese cities. Gogoro claims that the use of its scooters has saved more than 135,000 liters of gasoline so far and resulted in 261,000 less kilograms of carbon emissions.

In Amsterdam, it has the backing of the Amsterdam Smart City program, which is a partnership between private companies and the government to make the city’s energy sources more environmentally sustainable.

Co-founder and chief executive officer Horace Luke says Gogoro plans to expand into new European cities this year as long as there is consumer demand, even if it hasn’t been able to achieve the same level of government backing as in Taipei.

The company wants the Gogoro OPEN Initiative to prove that it can build a comprehensive network of charging stations on its own, which is vital for any company that wants its electric vehicles to have mainstream appeal. In fact, the lack of easily available charging stations is one of the main reasons Tesla has failed to gain traction in China, one of its most important target markets outside of the United States. If it succeeds, the OPEN Initiative will help Gogoro avoid that problem as it expands overseas.

Charging Forward On Its Own

Gogoro OPEN, which stands for “Gogoro Owner Proposed Energy Network,” will launch in Europe this summer before expanding to the U.S. Owners of homes or retail businesses can apply for a Gogoro GoCharger and, if accepted, the company installs it on their property (Gogoro says its GoChargers are free for business owners who plan to make them available to the public). Scooter owners find nearby GoChargers with fresh batteries on Gogoro’s app. 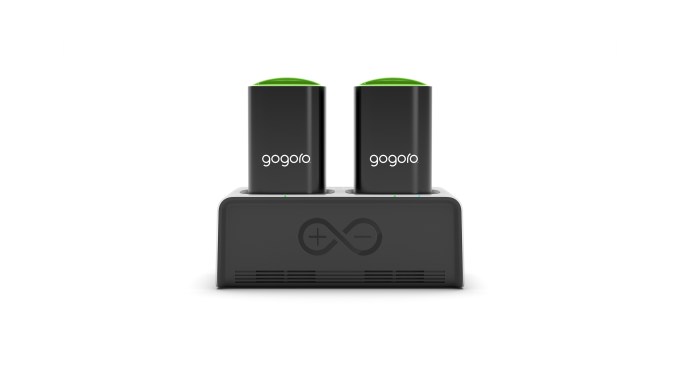 “The OPEN Initiative allows us to offer chargers to people, then for them to offer it for free to other people, since any charger, like a phone charger, has a down time of about 95 percent no matter what kind of charger it is. Our portal lets people sign up who want to be part of the Gogoro network, whether or not they own a Gogoro,” says Luke.

The benefit for business owners is a potential increase in customer traffic. Gogoro recently set up a battery charging station at a 7-Eleven in Taipei City and claims that over four days, it brought 600 new shoppers into the store.

“7-Eleven had been talking to us for a long time and we said we’d bring traffic to their door. They were doubtful at first, but impressed by the numbers,” says Luke. “There are active and passive retail locations and 7-Eleven is a passive retail location because you don’t expect people to come from other districts just to visit a new 7-Eleven, but we managed to do that.”

Luke says over 400 business owners have already applied for a GoCharger in Taiwan and many, like organic food stores, also serve the environmentally conscious consumers that Gogoro targets.

The GoChargers will operate like Gogoro’s standalone stations. Instead of waiting for their batteries to charge, Gogoro owners can swap them for a fresh pair. The batteries are wireless and the charging process is supposed to take less than a minute. 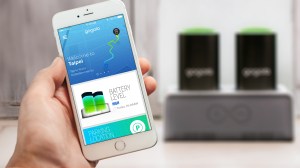 Luke adds that if the Gogoro OPEN Initiative becomes popular enough on its own in different markets, that will make it easier for Gogoro to approach city governments and ask them to support the construction of standalone charging stations. Gogoro may also eventually start manufacturing batteries and charging stations for third parties, thereby giving it another revenue channel.

The company also made another announcement at CES that has a smaller impact on its overall business strategy, but will be welcome news for users who hate carrying around keys. Scooters can now be unlocked with just Gogoro’s app, which is available on iOS, Android, and Apple Watches. Older Gogoro models came with a key to start the scooter, unlock the trunk, and reserve batteries at stations, but they can be upgraded to be completely keyless, and all new models will be app-only.

“It’s a cool feature that lets us demonstrate the power of smart platforms,” says Luke. “On other vehicles, you have to spend $60,000 to $70,000 to make this level of update, but we can give it to consumers for free. That’s why we’re excited about it.”