Juan López Salaberry Contributor
Juan Lopez Salaberry is an entrepreneur-turned VC. After a stint at 500 Startups, he is now back in the field and blogs from mindthegap.co.
More posts by this contributor

Miami is a city of many traits. Historically recognized for the sun, beach and tourists of South Beach, it has now become much more than that. With one of the most diverse populations in the country, Miami is the strategic capital of the Americas, binding Brazil and Spanish-speaking Latin America (LatAm) to the U.S. market.

Miami is now the second most entrepreneurial city in the U.S., with the highest startup density in the country at 247.6 startups per 100,000 people, according to the Kauffman Index. Its privileged proximity to both New York and Silicon Valley will allow this emerging ecosystem to consolidate its position as an entrepreneurial hub with the arrival of accelerators and VC funds.

Rather than trying to be the next Silicon Valley, Miami is following the lead of emerging tech hubs like Austin and Boulder, and is focusing on its strengths.

An on/off relationship for more than 25 years

Miami and tech have been having an on-again, off-again relationship since the 1990s, when it hosted some of the top media and financial firms from South America. One of the most iconic companies of that era was Patagon.com, a Miami transplant from Argentina that sold 85 percent to Santander for $585 million. It also served as a springboard to some of the pioneers in the Miami tech scene today, such as Juan Pablo Cappello, Constancio Larguia, Silvina Moschini and Peter Kellner, co-founder of Endeavor.

A lot has changed since those days. A new Miami tech scene came about seven years ago when “some of today’s most relevant players started forming and getting together,” as The Miami Herald’s Nancy Dhalberg put it. Florida International University hosted its first Americas Venture Capital Conference (2010), Susan Amat co-founded The Launch Pad at University of Miami (2008) and soon after she started Venture Hive, Miami’s most iconic incubator.

But is was in 2012 when, inspired by Dave McClure’s Geeks on a Plane stop in the city, The John S. and James L. Knight Foundation decided Miami had a great shot at becoming a startup capital. Since then, the foundation started accelerating and funding different local initiatives, bringing new players to the scene and becoming instrumental in Endeavor, Venture for America, LaunchCode, Emerge, IME, The Idea Center, The LAB and 500 Startups, among others, landing in the city.

People started to believe a startup culture could be created by developing the community.

The most recent grantee is PowerMoves, an initiative to raise the number of venture-backed founders of color and minorities. This particular organization well-represents the foundation’s spirit. In the words of Matt Haggman, program director at the Knight Foundation, “Diversity is our differentiator; unlock talent and amplify capital.”

Matt has become the city’s superman, getting involved in most activities within the current communities; he could easily run for mayor any day. Through his work, the foundation has committed more than $20 million in funding across 165 entrepreneurship initiatives in the Miami area during the last three years.

Just as FIU’s VC conference stopped, Manny Medina started cooking his annual eMerge Americas conference, where folks such as Jim McKelvey, co-founder of Square, have inspired thousands of people. It was around that time when Miami’s reputation as the capital of South America got back into play as a differentiator and people started to believe a startup culture could be created by developing the community.

Entrepreneurs Demian Bellumio and Ola Ahlvarsson have also found a way to connect tech with art, another one of Miami traits.  For three years now they have been producing SIME — the European conference — in the city around Art Basel Week, merging art, technology and media.

The hub is back

The opportunity has not only become obvious for entrepreneurs, but is also increasingly notorious for big companies that still make Miami their LatAm headquarters. Several companies are landing every week as Miami regains the title as a regional hub, and also as one of the most important platforms to serve the growing Hispanic power in the U.S.

Companies such as Google, Twitter, Facebook, Uber, Lyft and Vice have moved to Miami, along with new investors hungry for this opportunity. “Miami is the perfect place to start or grow your business, specially if you are interested in an international venture,” said Laura González-Estéfani, Director of Partnerships & Mobile LatAm for Facebook based in Miami.

González-Estéfani recognizes Miami as a hub for the Americas and Europe because the tech community is hungry for making new things happen. “There is talent, there is support from the institutions and private initiatives that are focused on boosting innovation, and there is an incremental interest from VCs and business angels for innovative projects.”

There are currently 139 startups and companies on the Inc. 5000 list that are based in the Miami metro area, doing everything from media to tourism to health tech. Another great incentive for firms coming to the city has to do with Miami’s tax advantages where there are no local or state income taxes, and Florida’s corporate tax is 5.5 percent, one of the nation’s lowest. 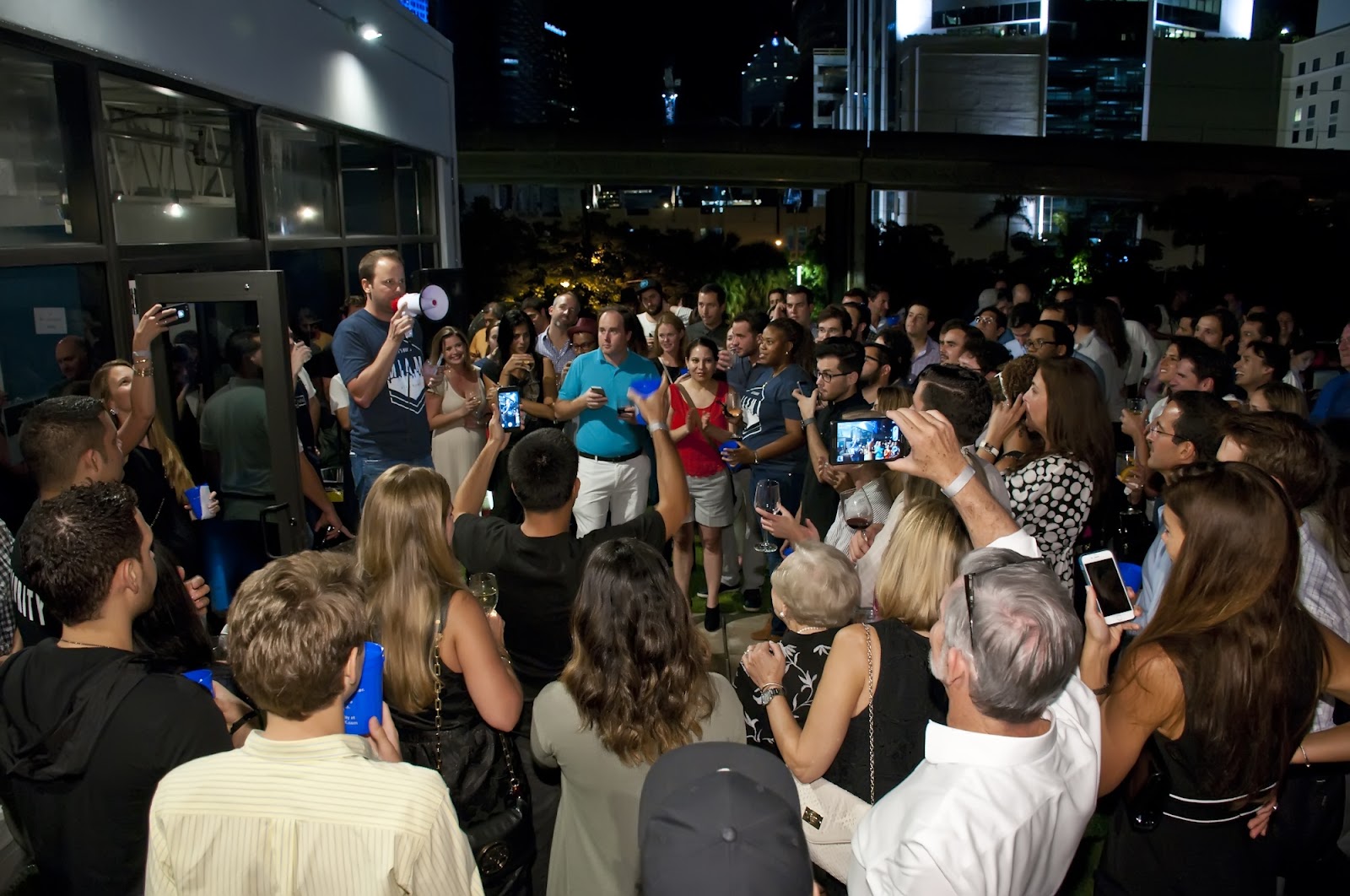 Jose Rasco, one of Building.co founders at the opening of the space. (Source: Building.co)

As made famous by Steve Jobs, the dots can usually be connected looking backwards, and Miami is no exception. The last few years have kept the local ecosystem busy with the starting of many initiatives.

Angel investors got organized and created groups educating an increasing the number of local investors in tech, co-working spaces popped up in every district — such as the recently opened Building.co by the succesful .CO crew — and coding schools started taking over the city.

Universities are now teaching entrepreneurship, VC funds are coming from outside the city and soon we’ll see accelerators arrive as Miami’s number of startups soars — up 46 percent — accounting for 1,600 companies (according to the Kauffman Foundation).

Hopefully current players will get together in a joint effort to connect the dots.

AGP Miami, the largest local angel group, is proof of how rapid change is happening in the city; it has quadrupled the number of its members, up to 80 investors, in the past two years. The group has invested in 14 firms, for a total of $2.8 million, and is actively looking to increase that number with both companies from Miami and those attracted to the city.

“Miami does not have a capital problem: We need family offices to trust new funds to leverage the power of Miami as a gateway. That is a tremendous opportunity,” said Nicolas Berardi, AGP Miami’s managing director.

One of the newcomers is European accelerator Startupbootcamp. Looking to benefit from Miami’s top positioning as a healthcare and talent hub will bring 10 companies a year to Miami for the next three years, and support them with its six-month acceleration program.

Many of these dots — not to say all — have a strong debt to the Knight Foundation’s efforts. But bigger questions now arise on how to make this a sustainable ecosystem. Knight is still very much needed, but hopefully current players will get together in a joint effort to connect the dots and build a stronger and bigger community.

As the city consolidates its place as one of the hottest entrepreneurial spots in the country, Miami has become a strategic market for one of the most valuable startups in the world, Magic Leap, and others, such as CareCloud, Open English and more. Altogether, these Miami royals have so far raised more than $763 million in venture capital, attracting talent and gaining attention from international investors.

In less than two years, LaunchCode, the non-profit organization from St. Louis, Missouri that received $1.2 million funding from Knight in 2014 for its first expansion city, has teamed up with more than 120 companies to hire through The Idea Center tech apprentices who don’t necessarily have a traditional degree.

As for Magic Leap, the virtual reality startup that raised $542 million in venture capital from Google and Qualcomm, among other tech giants, has chosen to relocate its headquarters to the Design Center of The Americas (DCOTA) in Dania Beach, Florida.

“Magic Leap’s move to DCOTA is an investment in the future, ensuring that we have the very best creative environment and resources to support our rapidly growing team,” said Russell Burke, Chief Financial Officer at Magic Leap, in a press release. “It’s also a pretty big statement about where we think we will be in the months and years ahead.”

There is, indeed, a right time to catch a good wave.

Another example of Miami’s thriving startup ecosystem is Andres Moreno and Wilmer Sarmiento’s Open English. The company raised $120.25 million in venture capital, and took advantage of Miami’s strategic position to launch an online English-learning business that serves more than 400,000 students in Latin America and the Spanish-speaking community within the U.S.

While Miami’s royals provide proof of success and business opportunities for startups and investors in South Florida, venture capital remains a weak link in the ecosystem. In 2014, the Miami metro area attracted $656.83 million of the $867.6 million in 36 venture capital deals that took place in Florida.

These figures pale in comparison to venture capital investments drawn by the states of California, with $26,840.6 million (San Francisco accounted for $10,948 million) or New York, with $4,510.9 million, with 1,631 and 422 deals, respectively (according to data from CB Insights).

The future of Miami

Yes, it is still early, and there’s more to come. A lot of it is going to come from attracting talent from outside Miami, and, honestly, it doesn’t seem to be a hard task. Miami is a great launching pad if you are interested in selling to LatAm or tapping into the U.S. market, with a privileged positioning to cater to U.S. Hispanics. The quality of life is great, it’s strategically close to Europe, LatAm, New York and San Francisco, the infrastructure is starting to be in place and the ecosystem is growing fast.

Institutional venture capital funds have yet to look at Miami with better eyes — but honestly, who would have expected for them to arrive before the opportunities?

This is already changing. 500 Startups has done a program in Miami, investing up to $250,000 in eight companies, and Scout Ventures established an office in Miami and made two investments. Prominent angel investors Patrick McKenna and Mark Kingdon have moved to the area, and local funds are starting to emerge, such as Z9 actively looking for companies.

The landing of Startupbootcamp’s accelerator is also encouraging, and will certainly pave the way for more accelerators to come.

Whoever has tried surfing at any point in their lives know something very well: There is, indeed, a right time to catch a good wave. It is certainly not at its peak; rather, it takes a bit of paddling and vision to catch the best waves and enjoy the ride.